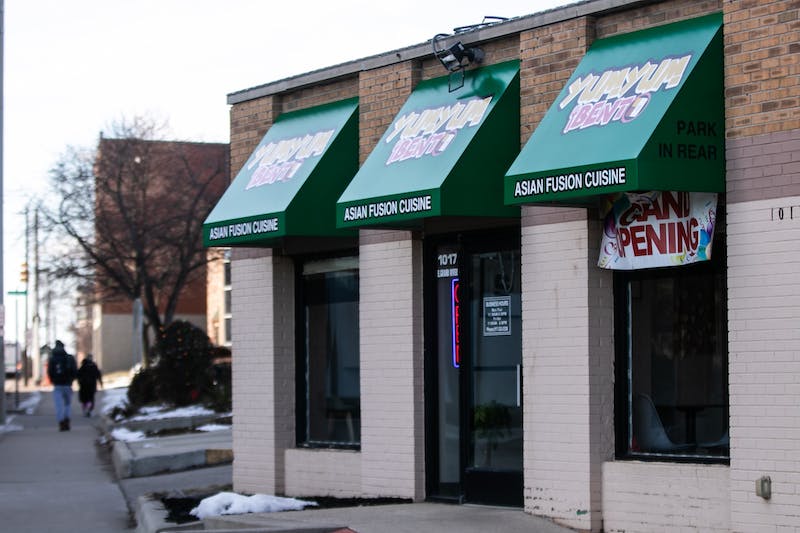 A new fast-dining restaurant, located at 1017 E. Grand River Ave., has opened its doors to residents of East Lansing.

YumYum Bento is a fusion of Asian cuisine with the concept of serving Japanese, Korean and Thai cuisine in a bento — a traditional Japanese-style lunch box that contains different meal courses.

“I really like to cook,” owner Shanshan Xu said. “I graduated from MSU, and my major was food industry management. So (I’m) all about food and management, and my husband is the sushi chef.”

Xu graduated from Michigan State in 2016 and currently maintains the co-ownership of YumYum Bento with her husband, Eddy Liang.

“I was thinking a lot of different students come from different areas and countries,” Xu said. “And we want them to have a different flavor for the food. So we thought maybe to have more choice.”

The concept behind YumYum Bento is to give fast and convenient access to Japanese homestyle meals.

Xu said her family went to Japan last year where she saw many different styles of bento boxes and was inspired by the idea. She said people in Japan described bento boxes as “yum yum bento,” indicating they were yummy. Thus, she decided to name the restaurant YumYum Bento.

The menu is divided into three different Asian-style cuisine sections with the idea of a having a meal from one country.

Side dishes are designed to coordinate with the origin of the main dish to maintain authenticity. There are a variety of main courses to choose from, such as yakisoba, Japanese curry, Thai curry and bulgogi.

“I looked at the menu, and I was quite interested,” freshman Kevin Su said. “They have Japanese, Korean and Thai. … So, if I like the food — I haven’t gotten it yet — I will definitely come and try again.”

Su said he liked the interior design of YumYum Bento and said it feels comfortable to him. He was also impressed by the restaurant’s self-serving style for water.

“I’ve never seen (it) before, so it is quite a refreshing take.” Su said. “Also, they have free Wi-Fi. It is really helpful, I’ll say for sure.”

Food server Michele Liu said she thinks the location is perfect as it is not far from campus and also accessible to the working community during lunchtime.

“(Bento Box) combines different things and I think in the nutrition aspect, they’re healthy,” Liu said. “I’d like (the residents) to try here. It’s very delicious, and you can choose whatever you want.”