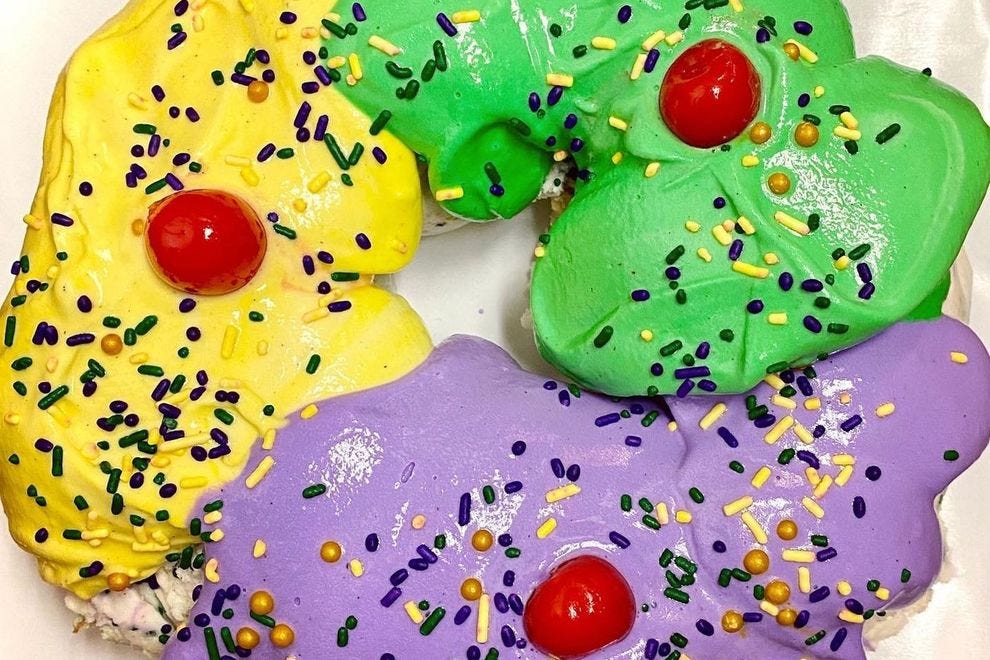 Photo courtesy of The Creole Creamery

As soon as early January hits, a special treat starts popping up at parties, offices and homes all over Louisiana.

It all starts with a simple, fluffy danish or brioche dough that is traditionally flavored with a cinnamon and brown sugar blend. Then, it’s iced and sprinkled with purple, green and gold sugar. Filled king cakes are popular, too. At Gambino’s, the most beloved fillings include cream cheese, Bavarian cream, praline, strawberry and apple. Rousse’s personal favorite is peanut butter and strawberry jelly.

Since Carnival and Mardi Gras are tied to a Catholic religious season (from Epiphany on January 6 to Ash Wednesday which marks the start of Lent), king cake is full of symbolism, though it’s not considered a religious food.

While the plastic baby that’s baked inside the cake represents the baby Jesus, these days, whoever finds the baby is said to have a year full of luck and good fortune ahead of them – and they bring the king cake to the next party. Each king cakes serves about 15-18 people.

“The ring shape symbolizes unity, like the holy trinity,” Rousse says. The colors of the sugar on top are also symbolic: purple for justice, green for faith and gold for power.

Though a few dozen bakeries make king cake, Rousse says that only a handful are well-known for it. Gambino’s sells king cake year-round at shops in Metairie, Baton Rouge and Lafayette, as well as by mail (which is about half of its business).

Traditional king cake is great, but rules are meant to be broken – especially in this food-and-fun-loving town. Creative restaurants, bakeries and other eateries through New Orleans have taken this local favorite and run with it.

These days, you’ll find king cake turned into ice cream, scones, doughnuts, burger buns, cocktails and more. Here are 10 of the most unique and delicious takes on the seasonal specialty. 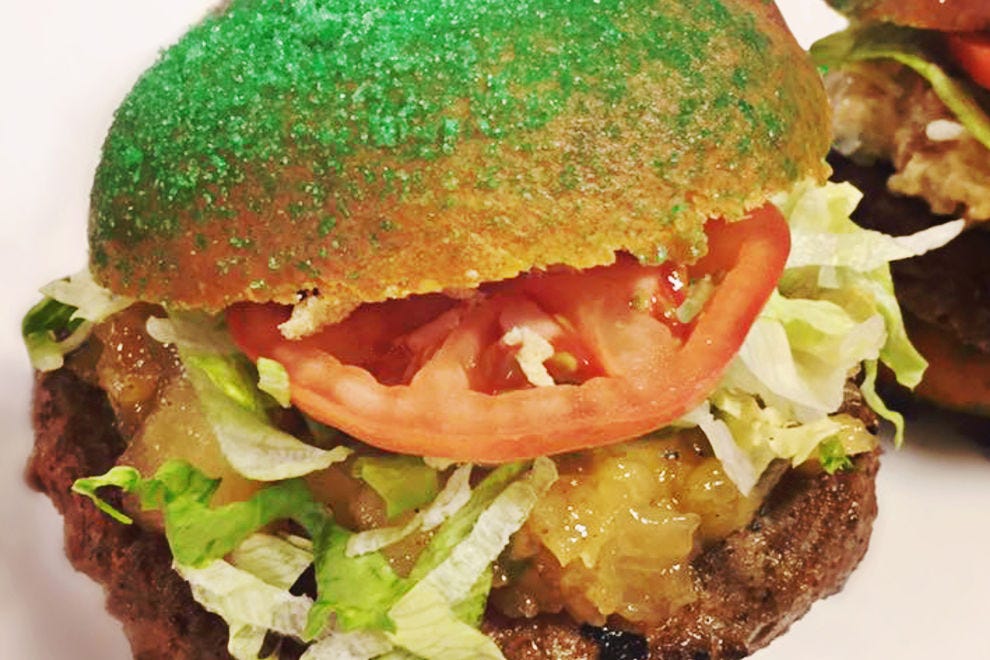 King cake burger at the Superdome and Smoothie King Center

Who says that king cake is only for dessert? Centerplate – the company that runs the food program at New Orleans’ top sports stadiums – has decided that the baked good makes a perfect hamburger bun.

Head to the Superdome or Smoothie King Center during Mardi Gras to try chef Lenny Martinsen’s creation: a burger topped with a smoky bacon-onion-chipotle spread on a colorful, sugar-coated king cake bun. 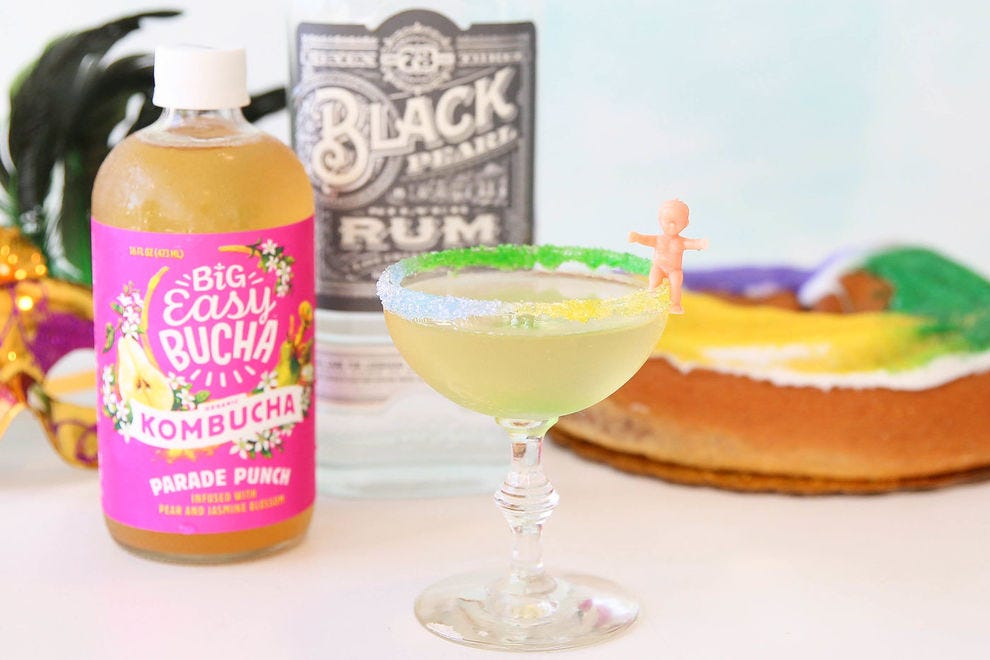 It’s garnished with a purple, green and gold sugar rim and a plastic baby. 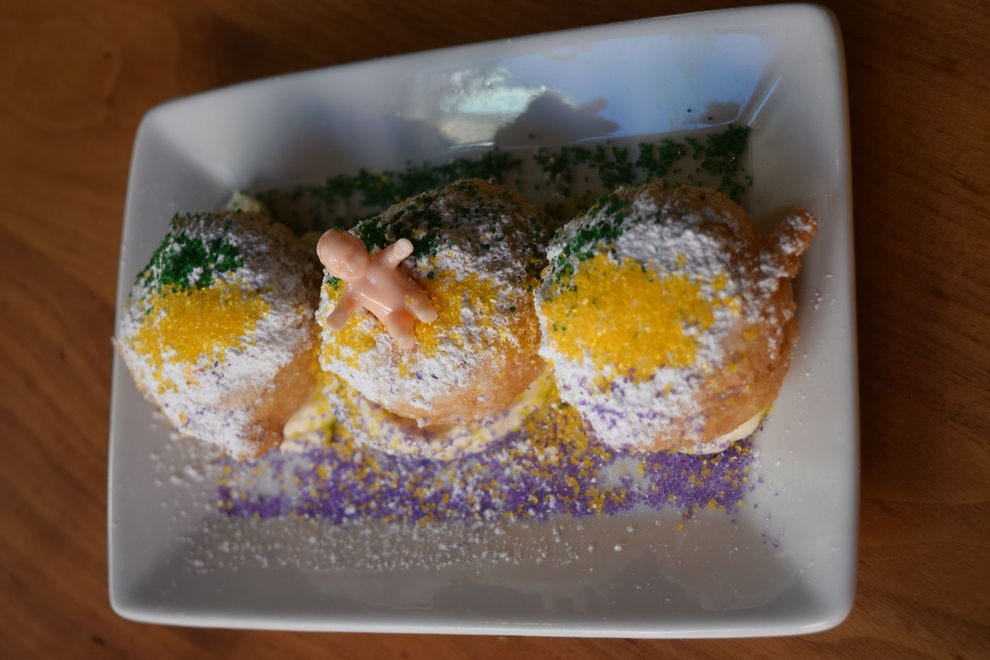 Any visitor to New Orleans knows that beignets are part of the culture. That’s why SoBou – the French Quarter sister restaurant of the venerable Commander’s Palace – combined the fried dough treats with the flavors and colored sugar of a king cake.

Make sure to also try some drinks at this hot spot; the current Mardi Gras bar offerings include Carnival-themed tipples from around the world. 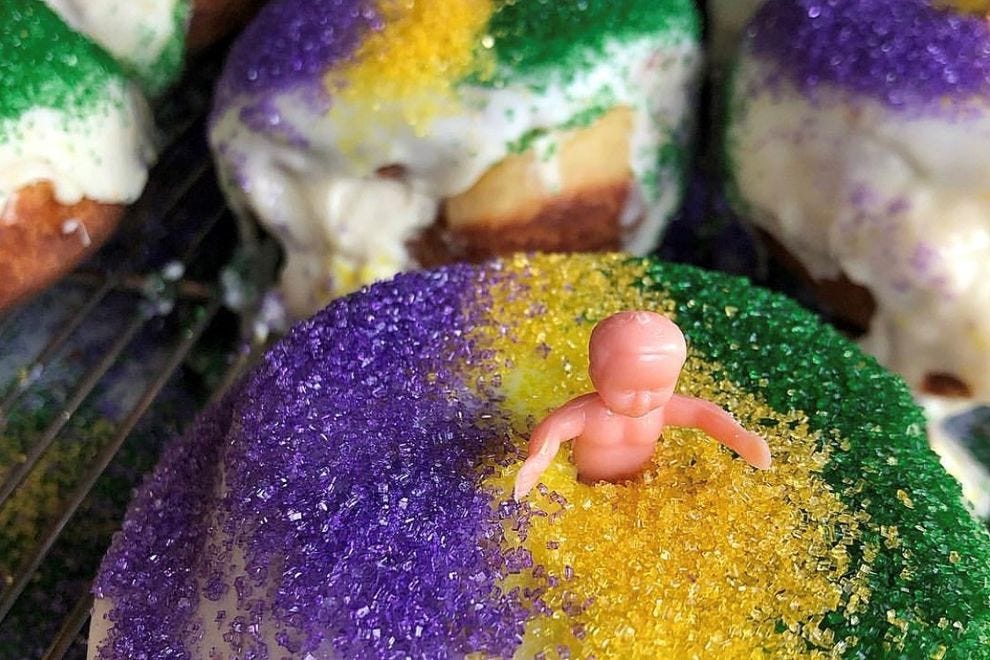 At every District Donuts location, find what are essentially miniature king cakes in donut form. The mini-chain’s king cake donuts start with a brioche-style dough that’s stuffed with cardamom cream cheese and topped with orange-infused royal icing. Each one is topped with purple, green and gold sugar – plus a plastic baby. 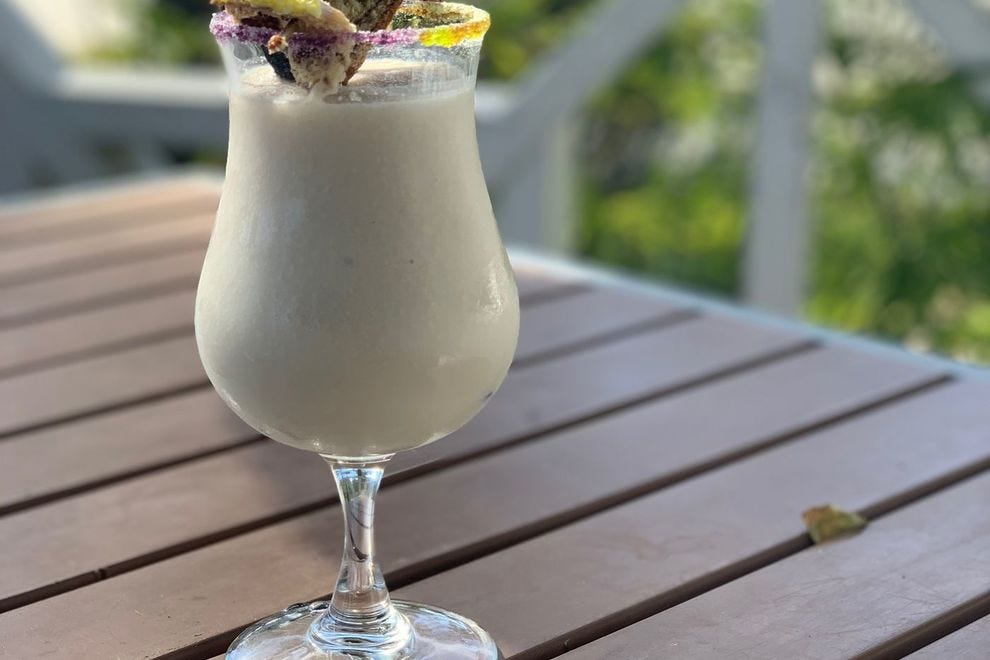 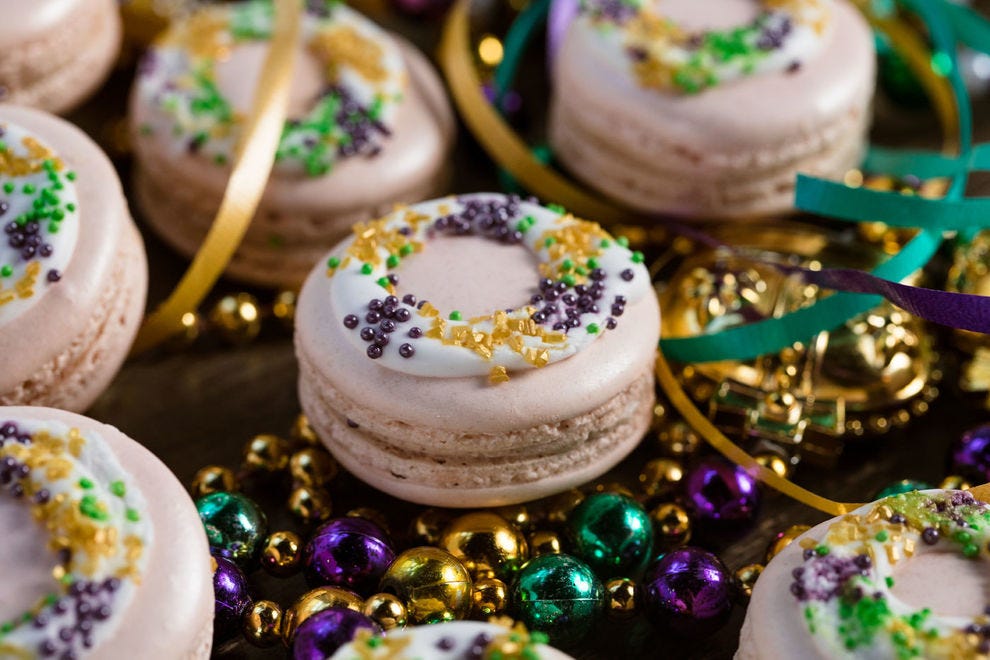 Macarons have been all the rage for a while now, but in New Orleans, they take on a Mardi Gras theme at Salt & Light Pastry Company. These beauties are filled with horchata (a cinnamon-forward rice milk drink) buttercream and cream cheese. They’re topped with rum-infused frosting and colorful sprinkles.

Order online or stop into the Drink Beauty coffee shop which occasionally has them for sale. 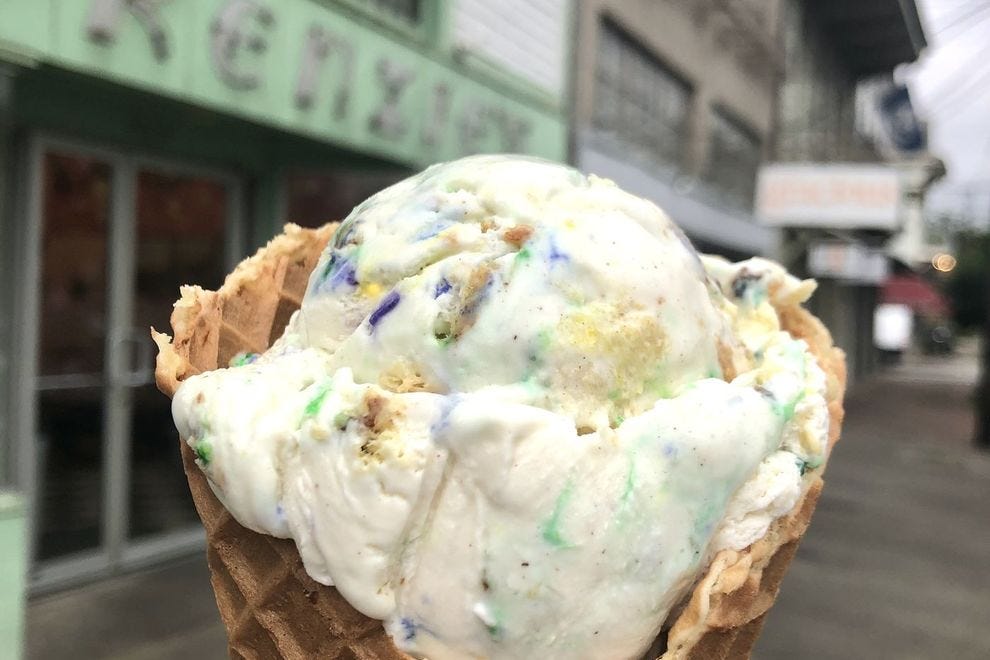 Photo courtesy of The Creole Creamery

Ice cream at the Creole Creamery

And the most photogenic of the bunch: an ice cream cake that looks like a traditional king cake, but made with ice cream in Mardi Gras colors and topped with cherries. 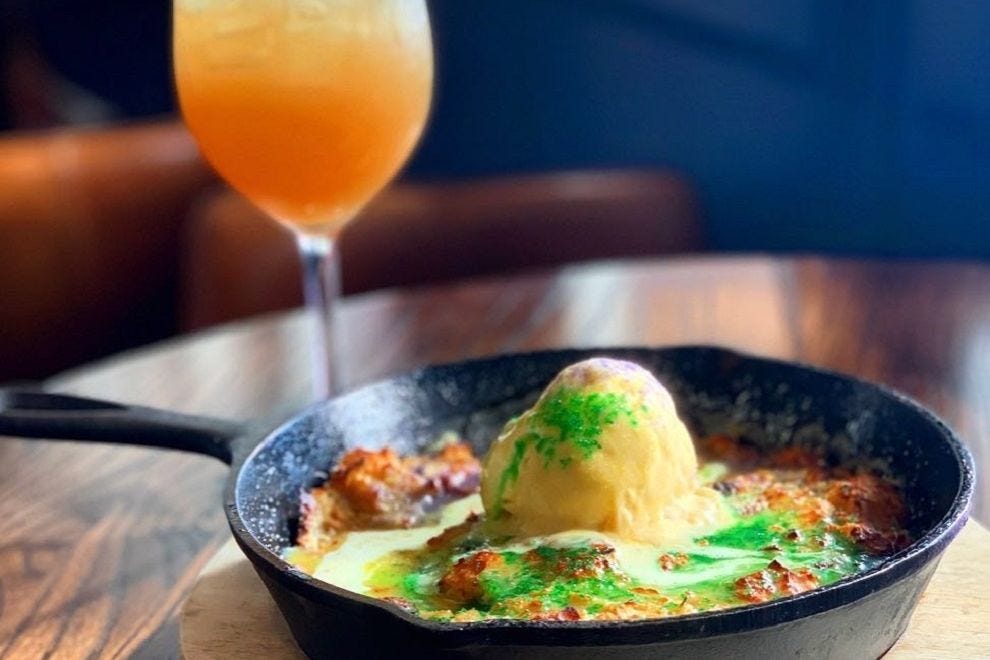 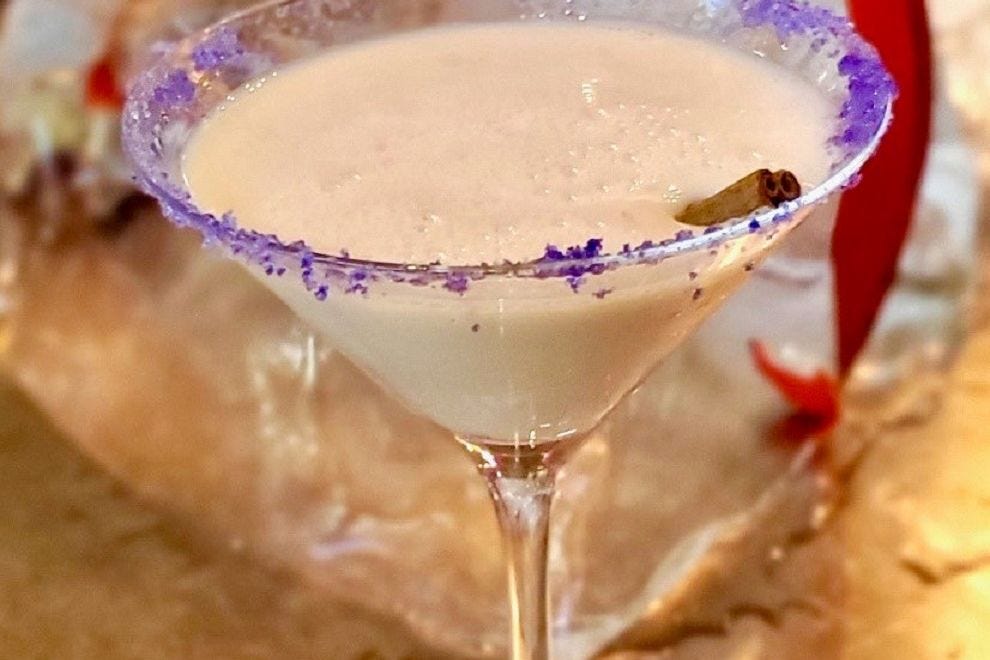 In the Loews Hotel, restaurant Poydras & Peters is shaking up king cake martinis. These boozy drinks include Taaka king cake vodka, walnut- and hazelnut-infused Nocello, Baileys and a dash of half and half. The rim of the glass is decorated with colored sugar and – for the lucky – may include a plastic baby. 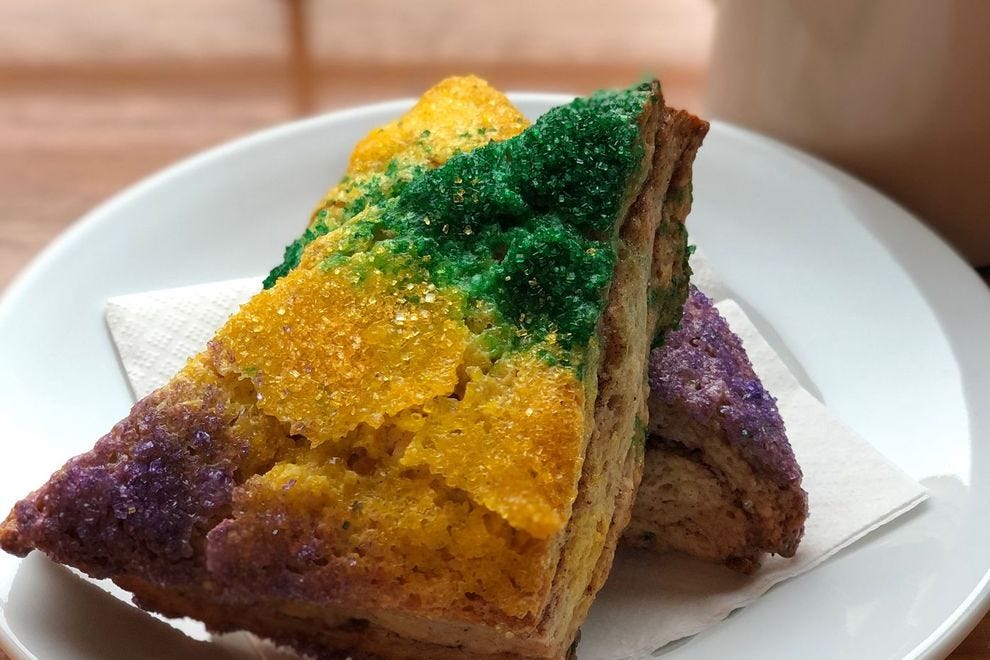 Restaurants are now down to the waterline – Mint