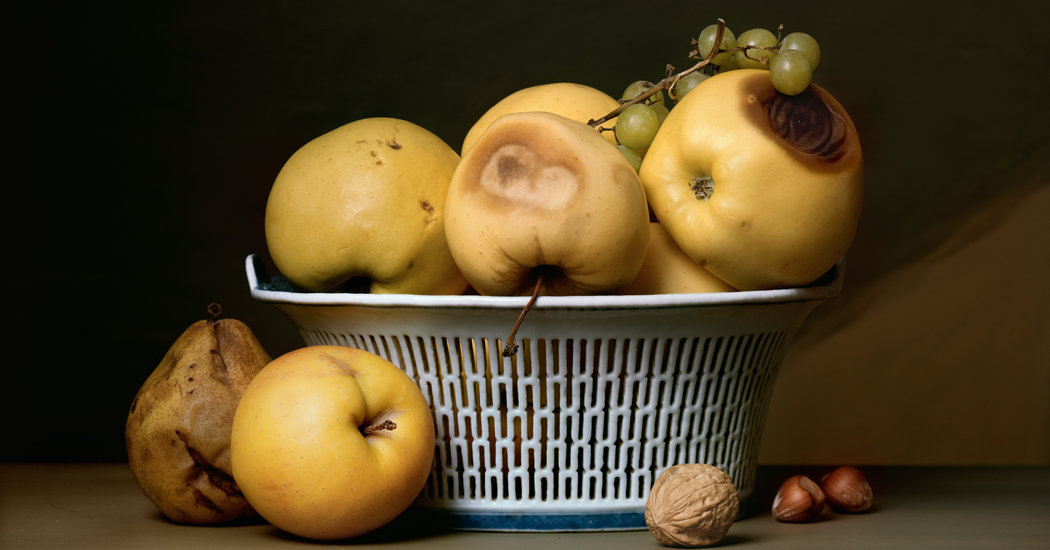 Photo shoots tend to offer a standardized landscape of amenities: A folding table blanketed in single-serving plastic water bottles. A large plastic tray of snackable food that will end up barely half-eaten. Cans of soda unlikely to be recycled. And then, once the set is broken down, there will be trash cans full of untouched sandwiches and discarded props. On a food shoot, those receptacles might also hold pristine cakes or whole roast turkeys painted in lacquer, the food stylist’s version of bronzer. If you’ve ever been on a set like this, you most likely know the feeling of passing a black plastic bag full of empty water bottles and wondering how soon their caps will become shark food.

Unless, of course, you’re on a photo shoot run by Amy Kanagaki. The Australian-born, New York-based producer is dedicated to minimizing waste on all her sets: She supplies reusable water bottles and metal straws, and works exclusively with catering companies that use compostable plates and utensils. She brings bags for organic waste — and often carries them out herself, coordinating with a local drop-off point. She even adds carbon offsets to the quotes she sends to clients, and pays for them herself if and when those clients balk at the added expense.

Kanagaki works mostly with tech and fashion companies; she produced a food shoot once but the amount of waste was “traumatic,” she says. And while many corporations are striving to go green, her approach is still novel; she can name only two other production companies that have integrated similar practices. “Even when I shoot in L.A., if I come in with reusable bottles and a compost bin, people say, ‘I’ve never seen this on set.’ But they love it.”

As over-the-top displays of food and flowers have come to dominate magazine editorials and the events industry — gleaming towers of crustaceans, cornucopia-like displays of bread and heaped vegetables, tiered cakes that would make Marie Antoinette quiver and floral arrangements so large and dramatic they look like a parting Red Sea are now regular fixtures at fashion presentations and brand events — the problem of waste has become increasingly magnified. In addition to Kanagaki, a few other small organizations are also working to divert the passage of organic refuse into the country’s garbage dumps, and hoping to make these extravagant spreads a little more palatable.

This month, Jason Wu showed his fall 2020 collection on a runway flanked with overgrown flora that called to mind the garden of an abandoned country home. Once the models had rushed off to their next shows, the flowers and branches were collected for their next assignment by Garbage Goddess. Founded in 2019 by Liza Lubell, a longtime floral events designer who had become disillusioned with the amount of waste that she and her peers were creating, the for-profit company contracts with event organizers and corporations to repurpose, recycle, upcycle and compost flower arrangements and the props that come with them. “There’s definitely been a maximalist approach to events recently,” Lubell said. “And it can seem really hypocritical. We’re supposed to be these stewards who connect people with nature, and then after an event it gets tossed into a landfill.” To avoid this outcome, she brings excess props, such as trellises or vases, to donation centers and schools. She has also built a network of dye artists in the city who will take her flowers and extract their natural pigments before composting the remnants.

Cleanup, like anything else, costs money, especially in the events space, where time is cash, and Garbage Goddess’s services start at $850 per occasion. A rare nonprofit that upcycles and recycles flowers is BloomAgainBklyn, which makes up to 450 arrangements a week from discarded flowers donated by partners like Trader Joe’s, David Stark and Cipriani. (The bouquets go to nursing homes, homebound seniors and other city residents who could benefit from a spray of azaleas.)

Food can be even more difficult to save from landfills, because of the ways that it’s regulated and the work it requires to upcycle or repurpose. Composting is labor- and capital-intensive, and takes time; post-consumer food waste and pre-consumer food can’t even be transported on the same truck. But now that food waste has become a pressing national issue — 40 percent of the food the United States produces is discarded — a growing number of organizations have found ways to redistribute it, among them the New York-based Rescuing Leftover Cuisine, and the San Francisco-based Replate. Both nonprofit companies charge only a small fee for food pickup, to keep themselves afloat, and both offer one-off pickups for events or shows.

Other organizations have begun tackling waste at different stages of the disposal process. The New York-based company Roho Compost offers composting and food upcycling services — it will often donate still-edible food to organizations like the Bowery Mission — but it’s also begun working with a company that packages juice, to make food (smoothies, juices, dips) from leftover fruit and vegetable pulp. Rethink Food, also based in New York, operates a community kitchen that repurposes unused food from grocery stores, restaurants and events into meals it delivers to local nonprofits and shelters. Last year, it partnered with Evil Twin Brewing in Queens, to make a sour pale ale from spent grains and unused cocktail ingredients collected from the NoMad Bar in Midtown Manhattan.

Maximalism might be the mood of the day — “you see more and more of these elaborate grazing boards and dessert tables, or food used as props,” says Lubell — but events are also being increasingly regulated. Last month, the New York City Sanitation Department expanded its commercial organics rule to include events with over 100 guests: now, just like restaurants, event organizers will be required to separate their organic waste at the end of the night. This waste is then picked up by the city, as part of its Zero Waste Challenge, which hopes to divert all refuse sent to landfills by 2030. “Inherently, production is waste. It’s wasteful,” said Kanagaki of her chosen field. But fighting against that has become a vocation all its own: “It feels like a grass-roots movement.”

A Texas Bakery Got Hate Mail Over Pride Cookies. Then The Community Rallied Behind It – BPR / Blue Ridge Public Radio