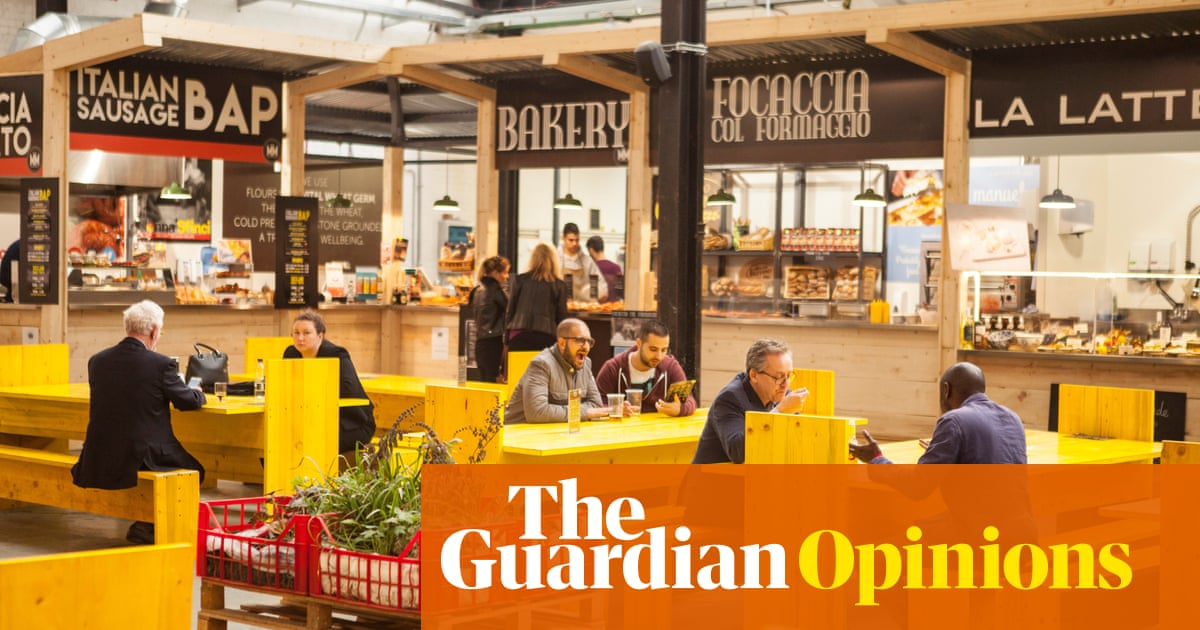 Street food markets are the most extravagant swindle visited on the middle classes since the 2010 Liberal Democrat manifesto, and it’s hard to know whether to laugh or cry about it. On the one hand, the notion of scores of yuppies paying £14 for a gourmet “snack”, to be eaten out of a paper tray while balanced awkwardly on a wooden pub bench, in a car park, in February, accompanied by “crafties” from plastic pint glasses, while lining the pockets of millionaire landlords is pretty funny. On the other hand, they are hallmarks of everything that is going wrong in our big cities.

What we eat and the way we eat it has always told us a great deal about politics and society. The explosion of trendy food courts and walled-off markets is no exception. They are exemplars of the financialisation and privatisation of urban space, of a middle-class ennui and yearning for authenticity, and a profits-first, pick-and-mix version of diversity. And such small portions!

The street foodification of everything is perhaps the biggest single culinary trend of the past decade. It’s about rinsing every last inch of urban space for rent extraction, as much as what’s for dinner. London in particular is awash with street food markets. Three branches of the Market Halls chain opened in 2018-19, to go with the five Kerb sites, four Street Feast sites, three Boxpark sites, two Pergola sites and countless others. In November, Kerb London opened its first fixed, indoor street food hall in a warehouse in the heart of Covent Garden, in collaboration with multibillion-pound property titans Shaftesbury PLC, which owns large swathes of the West End. And the artisanal-fare-industrial-complex is thriving in other major cities too: Baltic and Duke Street Markets in Liverpool, Hatch and Grub in Manchester, Brum Yum Yum and Digbeth Dining Club in Birmingham. Shipping containers feature heavily throughout.

And the new openings are not stopping. Time Out Group is moving from magazines into markets, with its first London food hall to open in Waterloo in 2021. There are three more branches of Mercato Metropolitano on the way in the capital too, and the first UK branch of Eataly, the Italian gastro-nationalist enterprise. In Glasgow, a substantial new market is planned as part of the riverside regeneration scheme, while Brighton’s first major food hall is set to open this year, run by a new company led by the former MD of Deliveroo. The food market phenomenon is, says industry magazine Big Hospitality, a “runaway train”.

Street food has developed such a ubiquitous marketing cachet that it is often now sold some distance from the street – in pubs and restaurants and other such indoor establishments. Supermarkets sell “street food” as chilled ready meals to heat up at home. As evidence that the trend has reached a new peak of sublime bathos, even Dairylea Lunchables is now selling a “street food” range. Words start to lose any semblance of meaning.

What is it that is so quietly discomfiting about this ostensibly banal trend? Maybe it’s the rather tragic lunge for a veneer of authenticity in the global capitalist village – I’m a traveller, not a tourist – as if to say, were I to go to Malaysia, I would naturally eat in a street market with local working-class families, not in the hotel restaurant, like some bore. I’m Anthony Bourdain!

It’s questionable how much innovation the 21st-century food court really allows. In buying a small slice of authenticity, customers are often choosing from quite a narrow list of cultural tropes: here’s a stall that only does ramen, another that only does German wursts, another that only does fish and chips, another that only does sourdough pizza. In the place of a genuinely cosmopolitan and accessible civic cultural life, we have a sanitised smorgasbord of multiculturalism, available at an inflated price, with security guards on the door. It is the offer of a culinary grand tour, designed for a generation of yuppies who don’t want to leave a converted tramshed in WC1.

It should be an obvious truth, but it bears spelling out: in most parts of the world, street food exists specifically for time- and cash-poor workers on the move. The irony of its recuperation as a leisure activity for the bored and bouji of the global north coincides with a period in which working-class migrant and diasporic communities are struggling to protect their food businesses from the smiting hand of property developers and local councils wielding compulsory purchase orders. Many of the 150 Latin businesses under threat from developers in Elephant and Castle are cafes, restaurants and food shops, as are those in the embattled Latin Village in Haringey.

These markets don’t just reflect the changing socio-economic demographics of an area, they are engines of gentrification in their own right – cropping up in areas such as Deptford and Brixton and Peckham at the same moment they become real-estate hotspots. Street Feast co-founder Jonathan Downey promised would-be investors in 2015 that the company’s expansion would focus on “underused and derelict corners of the city”. The street food markets act as honeypots for daytrippers (mostly white young professionals in their 20s and 30s), who like the “vibe” enough that they consider moving in full time.

There is one unarguably positive aspect to the street food stall or van phenomenon. Because the barrier to entry is drastically lower than an actual bricks-and-mortar opening, they give opportunities to would-be restaurateurs who are from less absurdly monied backgrounds. This can benefit cooks and entrepreneurs with a specific foreign cuisine to showcase, as well as those less likely to play it safe, or skew to a common denominator of whatever is most likely to sell. That is all good and delicious, when it happens.

But the concern is that their parent companies and landlords are inflating a bubble that threatens to burst. In place of stable jobs, incomes, or indeed food outlets, we have transience, hype and overpriced burgers. The street food revolution has trivialised cultural diversity at the same time as making our cities more homogenous and elitist. Maybe that’s why it leaves a bad taste in the mouth.

• Dan Hancox is a freelance journalist, focusing on music, politics, cities and culture