Here’s a look at the recent restaurant closures in Dallas-Fort Worth. For news on restaurant openings — cuz we’re still booming there, too — go to dallasnews.com/food/restaurant-news.

Picasso’s Pizza and Grill: The pizza shop with three locations in Dallas has closed. The Lake Highlands restaurant had been in operation for about 30 years, reports the Advocate; it was once on the northern end of of the neighborhood before it moved south on Skillman Street about 2 miles. We wrote in 2003 that Picasso’s was a beloved neighborhood spot in Lake Highlands. The all three Picasso’s in D-FW, all closed, are located on the Dallas North Tollway at Frankford Road in Far North Dallas; on Inwood Road near Forest Lane in Preston Hollow; and on Skillman Street and Walnut Hill Lane in Lake Highlands. Two of the restaurants have signs on the door that say the landlord has locked them out; one of those two cites a “civil dispute between the landlord and the tenant.” The third restaurant has a hand-written sign on the door that says “closed.”

New Main Brewing Co.: This Pantego, Texas, brewery isn’t closed yet, but the end is near. The owners write on Facebook that “we gave it our best shot, but negotiations with our landlord were unsuccessful.” The brewery will close after pouring beers on March 15. It was open for two years.

Chino Chinatown: Chinese-Latin American fusion restaurant Chino Chinatown closed in mid-February, CultureMap reports. The restaurant is not serving food during regular business hours, and paper has been put up to cover the windows. Chino had been open in Trinity Groves, a restaurant park in West Dallas, for six years. Chef Uno Immanivong was in the kitchen for most of its tenure, though she left the restaurant in August 2018 to open Red Stix Asian Street Food. One of the most popular dishes at Chino Chinatown was the duck-fat fried rice, a decadent plate with shrimp, sausage, pork and a sunny-side-up egg.

Old Chicago: Pizza and beer joint Old Chicago closed two restaurants at once: the shop in Mockingbird Station in Dallas and another on Highway 67 in Cedar Hill. The chief experience officer says it was “purely a business decision as we continue to focus on other Old Chicago locations throughout the country.” Two Old Chicagos are still open in North Texas, in Fort Worth and Garland. The brand operates more than 100 Old Chicago restaurants in other cities, many in the Midwest.

Hattie’s: Southern restaurant Hattie’s is closed for now in the Bishop Arts District. It was open for 17 years and follows the closure of two long-time Oak Cliff restaurants, Bolsa and Tillman’s. We have not been able to confirm the closure with the owner of the restaurant but can say that it’s not serving lunch or dinner right now. A sign on the door cites “maintenance issues.”

Water Grill: California restaurant Water Grill — one that our critic was thrilled to see open a few years back — closed in mid-February 2020 in Uptown Dallas. We needed more seafood in that neighborhood, an area stocked with steakhouses. But from the beginning, our critic found it to be “wildly inconsistent.”

Burger Street: The fast-food burger joint on Mockingbird Station in Dallas, in front of a Kroger grocery store, has closed after more than 25 years. CultureMap noticed the closure first and reports that the tenant was asked to pay higher rent. In the few weeks that have passed since the closure, crews have already been hard at work chopping down trees and removing items from the restaurant. Burger Street was founded by Bill Waugh, a restaurateur who died in 2015. He also founded Taco Bueno and Crystal’s Pizza and Spaghetti. Other Burger Streets in North Texas remain open.

LG Taps: The Lower Greenville watering hole LG Taps technically closed, but only because it immediately reopened under a new name: The Chuggin’ Monk. The ownership remains the same. Jason Caswell and Shawn Corley, who operate the bar, said they never liked the name LG Taps and decided to re-brand it to match existing bars they operate in Arlington and Fort Worth. The Chuggin’ Monk is at 3619 Greenville Ave., Dallas.

Bar Louie: In late January, Bar Louie closed 38 “underperforming” restaurants, the company confirmed. Two of those were in Dallas-Fort Worth: on West 7th Street in Fort Worth and on Melbourne Road in Hurst. Bar Louie is based in Addison and will continue to operate more than 90 restaurants.

Carlo’s Bake Shop: The cannoli kiosk inside Frisco’s Stonebriar Center closed in late November and has since been replaced by a La Duni pop-up dessert shop. The closure comes as a surprise, as Carlo’s Bake Shop debut in North Texas resulted in hundreds of people standing in line for hours on end. Of course, most of the fans were there to try to catch a glimpse of TV star Buddy Valastro, who appears on TLC’s Cake Boss with his family. The opening of the first Carlo’s Bakery in D-FW, at Preston Center in Dallas in 2016, was “the brand’s biggest,” we noted. When the Frisco shop opened in 2017, one woman camped out 18 hours before it opened. Carlo’s Bakery remains open in Dallas, at 8319 Preston Road (at Northwest Highway). 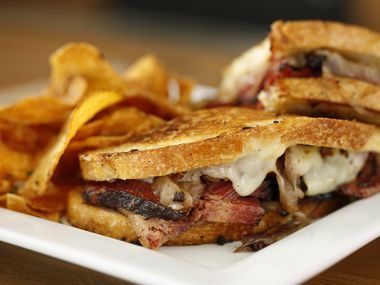 Plant-based food grows in US – FoodManufacture.co.uk