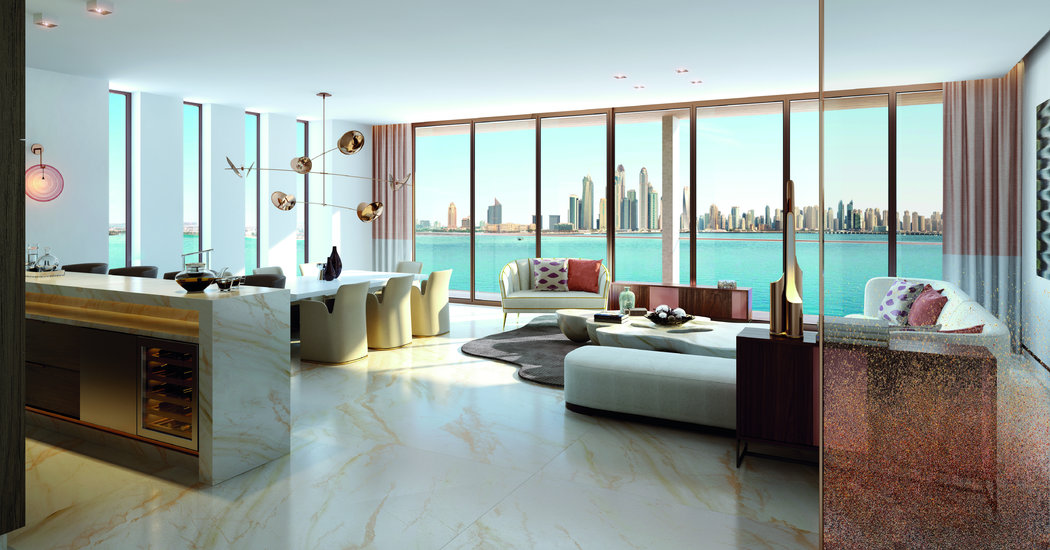 The chef Ashley Palmer-Watts has helped Heston Blumenthal create global brands, including the Fat Duck and Dinner restaurants, over the last 20 years, and the two have now led a culinary push into an entirely new industry.

Mr. Blumenthal’s long-term right-hand man, Mr. Palmer-Watts has shuttled between London and Dubai to oversee the opening of a restaurant that is at the heart of a new facet of luxury residential property development.

“Linking up with a property development is a very different thing for us, but with the right quality and the right offering, this could be the start of a trend,” Mr. Palmer-Watts said.

Celebrity chefs and famous restaurants like Mr. Blumenthal’s are the latest front in the endless battle to lure property buyers and renters, a competition that has moved well beyond offering amenities such as concierges, pet spas and yoga studios.

From the Canary Islands to New York City, developers have begun to use gastronomy to give their properties an edge in the market, forging relationships with culinary stars.

Those tie-ups include formal links with chefs such as Mr. Blumenthal and Wolfgang Puck and a property program on the Spanish island of Tenerife in the Canaries that offers catering in your new home by one of Spain’s most decorated chefs.

At the more innovative end of this mixture of culinary and residential marketing is 475 Clermont, an upmarket rental development in the New York City borough of Brooklyn that has a chef living in the building to run supper clubs or communal dinners for residents of its 363 homes.

This focus on dining builds on the recent trend of giving the owners of luxury apartments access to the services of nearby hotels, some of which have their own famous restaurants.

In terms of celebrity chef firepower, the global heavy hitter will soon be the Royal Atlantis Resort & Residences in Dubai, where Mr. Palmer-Watts has overseen planning for the third Dinner by Heston Blumenthal outlet, after the original in London and a failed venture in Melbourne, Australia.

When the complex opens in the last quarter of 2020, it will be the only residential complex in the world to host outlets of three chefs recognized by The World’s 50 Best Restaurants awards.

Apart from Dinner, the Royal Atlantis residences and an adjoining 800-suite hotel will be home to Jaleo by José Andrés, who received the Icon Award at last year’s awards, and La Mar by the Peruvian chef Gastón Acurio, who collected the lifetime achievement award in 2018.

Owners of the 231 residences will be able to order room service from most of the restaurants and have discounts at those venues, plus new outlets of Hakkasan, Estiatorio Milos by Costas Spiliadis and Ariana’s Persian Kitchen.

Mr. Palmer-Watts said Mr. Blumenthat planned to be “very hands on” with the Dubai project. “This is quite a unique complex they are building, so we have had to put a lot of thought into our part in it,” he said.

“We will get normal clients, but we are hoping to become almost like the ‘local’ for people living in the complex. It’s going to be the sort of destination that once you are there, there is not much need to leave.”

The Dubai menu will be based on the themes of the Dinner in London but with a heavier emphasis on seafood and no pork.

Timothy Kelly, the managing director of Atlantis Resorts and Residences, says access to so many top-flight chefs has proved a major marketing asset for the 37-story tower, where two-bedroom to five-bedroom homes are on sale from $1.9 million.

“As we have been explaining the project to new buyers, it has been obvious that they are excited by having so many recognizable chefs,” he said.

Maria Morris, a partner with the Knight Frank property consultancy, said it was impossible to estimate the price premium added by the gastronomic lure, “but we can tell from people’s responses that it is really capturing their imagination.”

Potential buyers were invited to a series of meals at Blumenthal’s London Dinner restaurant over the summer “and they were blown away,” Ms. Morris said.

“The sort of clients you are dealing with at the top of the residential market take for granted things like great design,” she added, “and it is getting harder and harder to impress them without something unique.

“There was a phase when every development was adding amenities like cinema rooms to try to get a competitive edge, but it was often done just for the sake of it, and I don’t think many people are actually using any of those cinemas.”

“But when you look at it as a lifestyle purchase, having a collection of celebrity chefs right on your doorstep is a real point of difference.”

Fred Scarlett, the sales and marketing director of the London developer Clivedale, said the growing focus on culinary attractions makes sense “when hotels and residential schemes are increasingly behaving like each other.”

“They are converging on each other at the top of the market because of the changing lifestyles of people who are very mobile and very international,” he said.

Clivedale is marketing a 27-home luxury development overlooking Hyde Park called the Mayfair Park Residences that will have access to the amenities and services of the Dorchester Collection hotel 45 Park Lane.

It follows similar residential partnerships by the Mandarin, Peninsula and Four Seasons hotel groups, with a Raffles-linked project now under construction in London’s Whitehall district. But a special draw of the Mayfair Park Residences is that residents will be able to order room service and have signing privileges at CUT at 45 Park Lane, Wolfgang Puck’s only restaurant in London.

“There is definitely a premium that people will pay for a top hotel’s service, and that is even higher when it comes with a chef as famous as Puck,” Mr. Scarlett said.

“Some buyers will live there permanently,’’ he added, “others will use it for just part of the year or two or three days a week, but having service of that quality on tap makes it very easy and flexible.”

The project is to be completed in March with prices starting at 4.25 million pounds, or $5.5 million, and units ranging from one to four bedrooms.

Simon Garcia, director at the buying agency Quintessentially Estates, said access to in-house meals was especially attractive to international travelers because “no matter what time of day or night, it’s possible to order a favorite meal, a definite perk for those regularly crossing time zones.”

Alexandra Sinick is a tenant at 475 Clermont, the Brooklyn project that has started what it calls the world’s first live-in chef program. When she first toured the 12-story building, which ranges from studios to two-bedroom apartments, she was shown amenities including a pet spa, a bocce court and a rooftop outdoor movie screen, but it was the chef program that caught her attention.

“I thought ‘How cool!’ because my husband and I are real foodies,” said Ms. Sinick, a 33-year-old project manager at an international communications firm.

She and her husband were already fans of the popular Brooklyn restaurants Misi and Lilia, where 475 Clermont’s live-in chef, Bronwen Kinzler-Britton, and her culinary partner, Meryl Feinstein, have both worked.

“They are two of our favorite restaurants, but it can be really hard to get reservations so it was pretty amazing to have two of their chefs cooking right here in the building,” Ms. Sinick said.

“It wasn’t the only reason we decided to rent here, but it definitely made it more attractive.”

Ms. Sinick said the 10-person supper club and wine pairing she attended in Ms. Kinzler-Britton’s one-bedroom apartment had been “a great way to break the ice with some of our neighbors” and she is now planning to hire the chefs to cook for a dinner party in her own two-bedroom apartment.

Matthew Villetto, vice president of Douglas Elliman Development Marketing, which is leading the leasing of the property, said the chef program signals a major change for the property industry because “experiential programming is the next evolution of amenities.”

“Creating a unique culinary experience in an intimate setting that fosters a sense of community among our tenants is a true differentiator in the marketplace,” he said.

The Abama Resort in southwest Tenerife has started its own at-home dining program to provide owners with meals and wine pairings overseen by the Melvin restaurant of Martín Berasategui, the chef holding the most Michelin stars in Spain.

Another development that is hoping a culinary offering can inject life into its marketing program is the high-profile conversion into 82 luxury apartments of one of the first skyscrapers in London, the 33-story Centre Point tower, next to the Tottenham Court Road tube station.

Starting at £1.88 million for one-bedroom apartments, half the homes were sold before the rest were taken off the market last year because of low demand amid the Brexit-fueled slump in London’s top-end market.

They went back on sale through Knight Frank over the summer, alongside the opening of the ground-floor Arcade, which is billed as an all-day food theater.

It includes six kitchens, three bars and a “pop-up” mezzanine kitchen for new chefs, with open kitchen designs and counter seating to generate a sense of theater as diners watch the chefs and their teams do their work.

D.J. music sets and art installations are intended to add to the buzz of the space, where tower residents can dine “out” for three meals a day without stepping outside the building.

The Arcade chefs are not celebrities, but several are well-known, led by Selin Kiazim of the highly regarded Turkish restaurant Oklava, Charlie Carroll of the Flat Iron Workshop and Zijun Meng and Ana Gonçalves, who offer the Chinese-Portuguese fusion-themed TÓU by TA TA Eatery.