This may take the cake for the nastiest dessert ever.

An Australian woman was disgusted once she allegedly discovered that a bakery cake her family recently bought was full of green mold beneath its frosted surface, she claimed.

On Monday, Jamie Hogan shared the stomach-churning story to Facebook, where it has since gone viral with over 6,000 shares and hundreds of comments. Hogan alleged that her husband bought her the cake from the Picton location of Michel’s Patisserie in New South Wales on Friday, but said they didn’t dig into it until Sunday. However, the woman and her 11-month-old baby daughter admittedly ate some of the icing, unaware of the ghastly state beneath the surface. 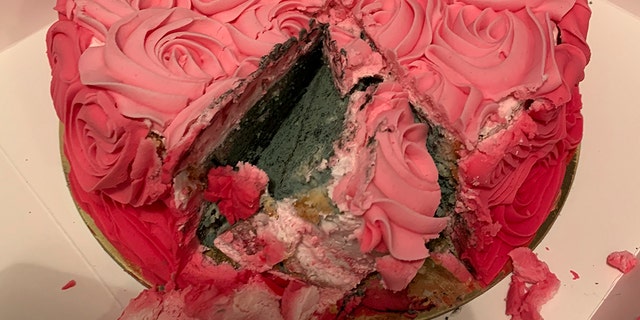 The woman and her 11-month-old baby daughter admittedly ate some of the icing, unaware of the ghastly state beneath the surface.
(Caters News Agency)

FAMILY SHAMED FOR LEAVING ‘DISGUSTING MESS’ AT RESTAURANT TABLE: ‘IT IS NOT OK’

“That green stuff you can see is mold, the inside of the cake was completely green,” Hogan explained, posting images of the now-bad vanilla sponge cake. “I nearly gagged when I placed it on my plate and dust came from it. This was refrigerated 20 mins after purchase… what [if] we served this to people at our house had I had a party [?]”

The mom said she ultimately received a refund from the bakery’s owner as well as a $50 voucher for the Michel’s Patisserie chain after complaining, but still felt upset.

“After going to bed I realized this could have been a child doing a cake smash,” Hogan said, referencing the trendy tradition where a baby “smashes” and eats a small cake on their first birthday for a picture-perfect moment.

Commenters described the “horrendous” sight as a “huge health risk” and speculated as to how the cake could have possibly gotten so nasty in the first place.

“Really sorry this had happened to you and hopefully you and your daughter are OK. What they did is not acceptable and I’m more amazed that they think a $50 voucher would solve it! That cake would be at least 3-4 weeks old to get to that state!!” one user said. 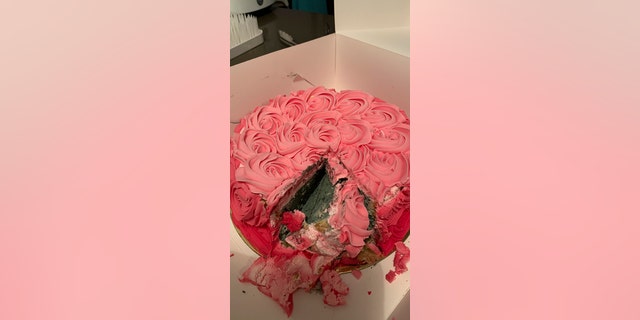 Commenters described the “horrendous” sight as a “huge health risk” and speculated as to how the cake could have possibly gotten so nasty in the first place.
(Caters News Agency)

“That cake would have had to be sitting there for weeks for it to be like that. Could it have been a display cake maybe?” another wondered.

“You and your daughter could have inhaled that mold dust,” another worried. “So dangerous and totally unacceptable.”

“That is terrible. It’s not about the money it’s about what could [have] happened,” one agreed.