Our vegan teenagers drive us bananas! Parents complain their kitchens have become a battlefield with separate ovens, pans, utensils and two dishes cooked for EVERY mealtime

By Helen Carroll for the Daily Mail

Preparing family meals can be tricky at the best of times. Spare a thought, then, for Gemma Hannan who, thanks to her ardently vegan and vegetarian daughters, not only cooks individual dinners for them, but has to use separate ovens and utensils for fear of contaminating their food with even the tiniest particle of meat, dairy or egg.

So committed to the cause are Charlotte, 15, and Courtney, 14, that they’ve issued their mother strict instructions to ensure that their diet is 100 per cent animal product-free.

Heaven forefend the slightest drop of meat juice from a sausage casserole end up in their bean sprout stew. 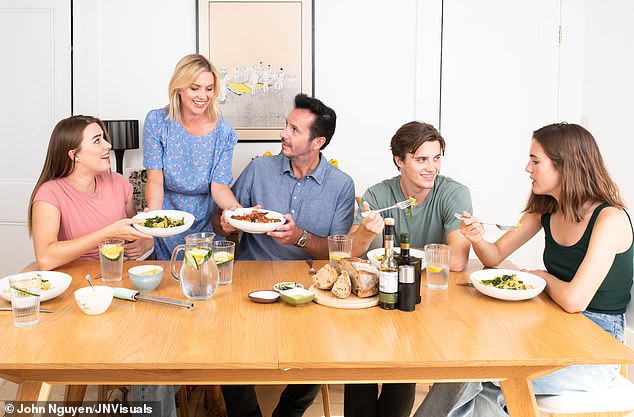 Juliet has to make three different meals for her family as her husband Simon eats meat, while his Juliet is vegetarian and their three, now grown-up, children (George, 21, Lydia (pink top), 20, and Ruby (green top),18, are vegan

Gemma, 37, is not the only parent enduring these daily kitchen battles. The number of vegans in Britain has quadrupled in four years to some 600,000, in part inspired by celebrity trendsetters such as singer Ariana Grande, as well as the growing eco-activism movement.

‘Meeting everyone’s dietary demands can be stressful,’ says Gemma, from Chesterfield, Derbyshire. ‘Luckily I have a double oven and enough pots and pans to ensure I follow all rules for avoiding cross-contamination.

‘In the early days, I’d buy vegetarian burgers, thinking they’d be all right for Courtney. Then she went through the bin to find the packaging. ’

Gemma continues: ‘Charlotte is a bit easier as she eats dairy, but Courtney won’t even make me a coffee because it involves pouring cow’s milk.

‘I end up cooking lots of curries and chillis, one version with meat and one with chickpeas. 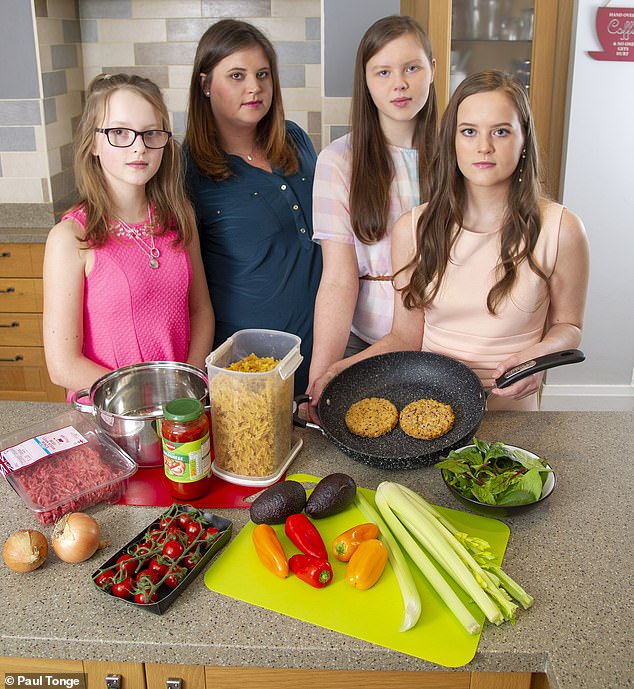 ‘Courtney insists I grate her cheese first. And rinsing the grater is not enough.’

Gemma should count her blessings, though. Some vegan children are so strident, according to Robbie Lockie of vegan website Plant Based News, they keep fridges in their bedrooms to avoid confronting the horror of raw meat in the family kitchen.

One unexpected benefit, however, is that Gemma’s daughters now also cook for themselves.

While leafy green vegetables help Gemma’s daughters meet their calcium and iron needs, Courtney has a deficiency in vitamin D — found in fish, cheese, eggs and milk — so takes a supplement. 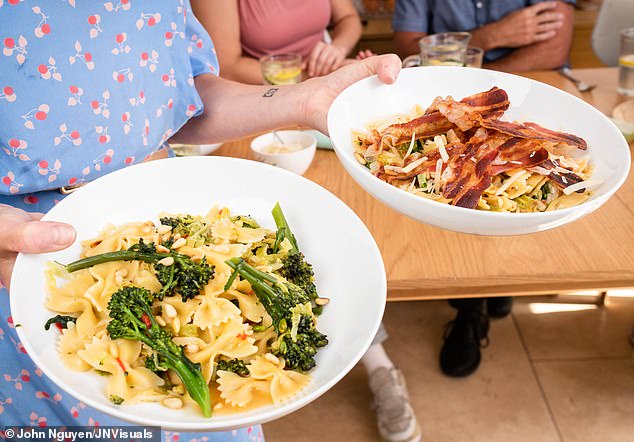 As Juliet and Simon Sear know well, even once children eventually leave home, they often boomerang right back again. She is pictured holding vegan and meat options

She doggedly insists it’s only a lack of sunshine that’s to blame. Gemma is less convinced.

Another unexpected silver lining is that Gemma, inspired by the pressure at home, has set up a new business, El Cafe Verde, selling plant-based, gluten and dairy-free foods, which opened in Chesterfield this year.

However, according to Courtney, being the only vegan in a house full of carnivores — which also includes younger sister Chloe, 12, stepdad Jonathan, 35, and his three children from a previous relationship — can be difficult.

‘Once, we were having spaghetti bolognese and there was no spoon in the pan mine was in, so I got cross with Mum, worrying she was stirring both versions with the same spoon.

‘Some of my family don’t understand, and when I say: “Think about the animals!”, they joke: “What about the poor plants?” If I ate meat I would feel guilty — we’ve got two dogs, a cat and five hens and I hate the thought of them being hurt. 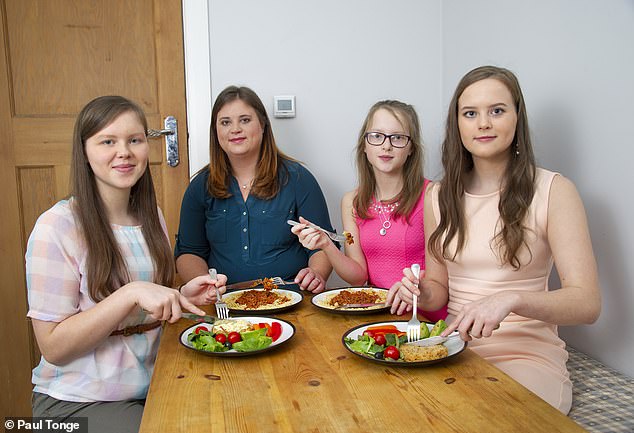 Gemma, inspired by the pressure at home, has set up a new business, El Cafe Verde, selling plant-based, gluten and dairy-free foods, which opened in Chesterfield this year

‘I follow vegan families on YouTube and have learnt how not eating animal products helps prevent climate change.’

Indeed, in this climate of youthful eco-activism, epitomised by 17-year-old Greta Thunberg, the environmental benefits of veganism have captured the hearts and minds of many youngsters, who often cite research to back their cause — such as that from Oxford University last year, which estimated that cutting out meat and dairy could reduce a person’s carbon footprint from food by 73 per cent.

To help them stay on the true vegan path, young people make heavy use of dedicated social media feeds and YouTube channels, and share the conflicts their veganism causes on websites such as Plant Based News. 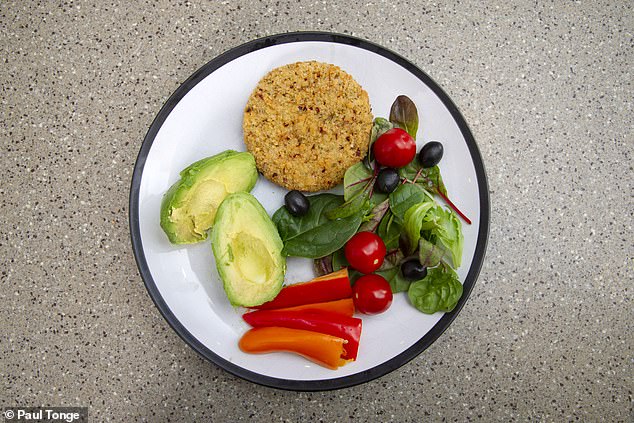 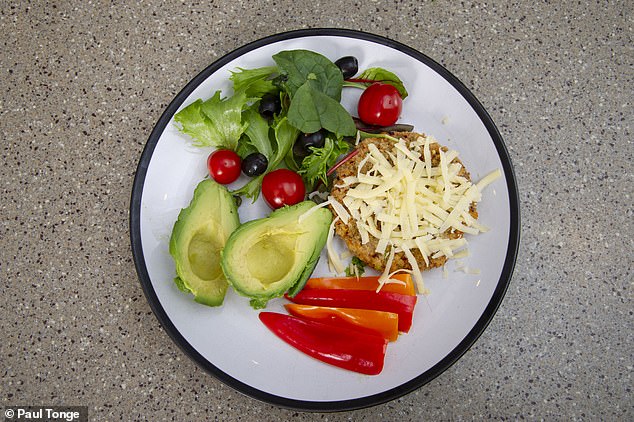 The same meal is served up for Charlotte, but grated cheese is added because she eats dairy 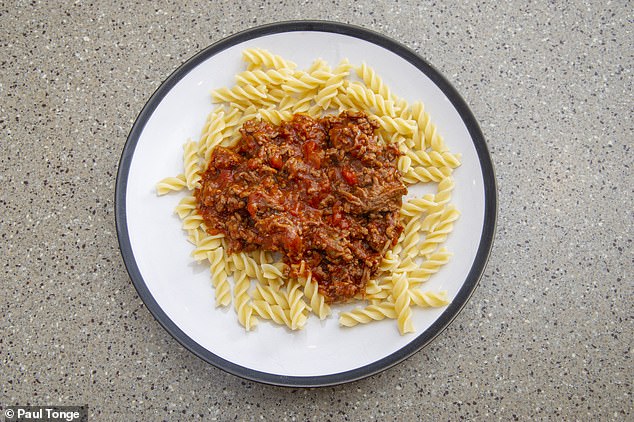 ‘Many come under pressure to abandon their vegan lifestyles,’ says co-founder Robbie. ‘Parents assume it’s about being fussy, or have concerns around eating disorders, but it’s about making an ethical choice.’

Robbie acknowledges part of the tension stems from meat-eaters feeling preached at.

‘When you’ve discovered a belief system that animals should not be killed for human pleasure, it can be very upsetting seeing your parents eating meat,’ he says.

‘But I advise young people to be patient. Their parents are putting a roof over their heads.’ 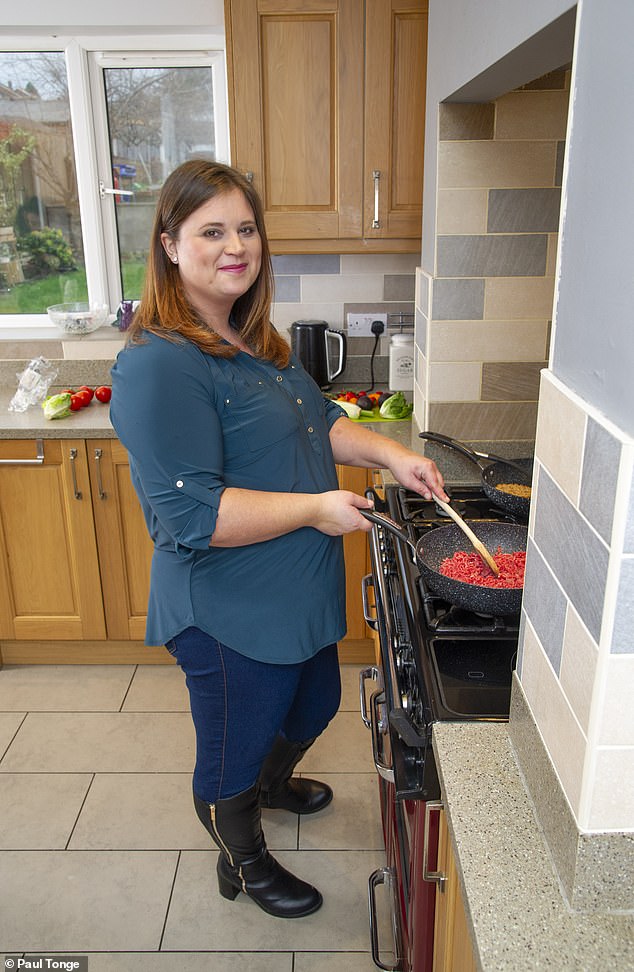 Gemma has to use separate ovens and utensils for fear of contaminating their food with even the tiniest particle of meat, dairy or egg

But, as Juliet and Simon Sear know well, even once children eventually leave home, they often boomerang right back again.

All three of theirs — George, 21, an actor who was also nominated for animal charity Peta’s 2018 UK’s Hottest Vegan; Lydia, 20, a graphic design student; and Ruby, 18, a model — follow strict meat-free and dairy-free regimes.

While Juliet is now vegetarian, Simon is still partial to the odd juicy steak or bacon sandwich.

While it’s generally enough to keep animal products separate from any vegan food in the fridge in their North London home, their children were so offended by the smell of cheese at Christmas that they insisted on it being kept outside. And Juliet gave in. 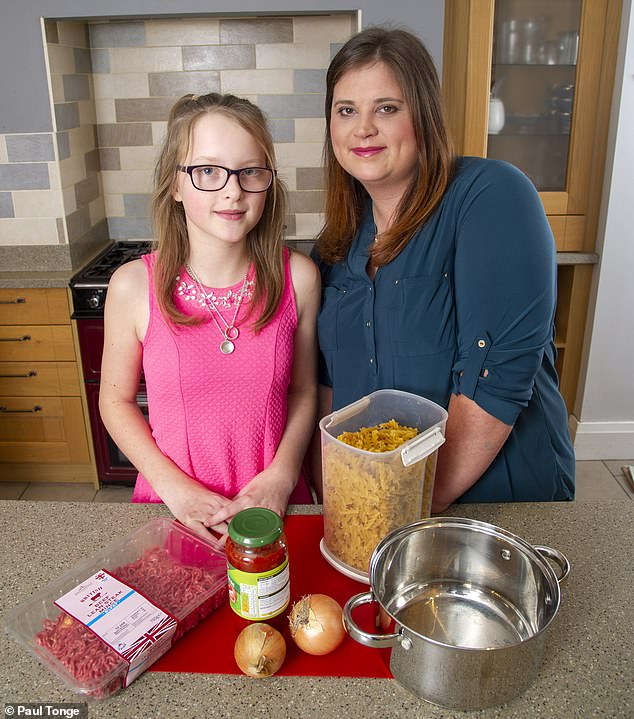 Chloe, stepdad Jonathan, 35, and his three children from a previous relationship all eat meat

‘When they first went vegan — George five years ago and the girls a couple of years later — they were very preachy, especially Ruby,’ says Juliet, a cookery author and food stylist.

‘The more they extolled the virtues of veganism to Simon, the more he ignored them. 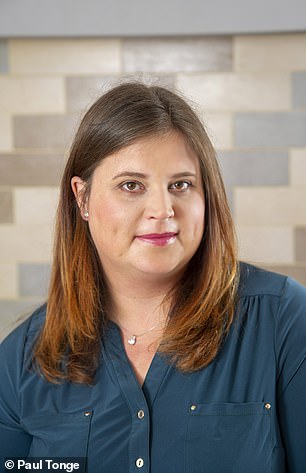 Gemma, 37, is not the only parent enduring these daily kitchen battles

‘We have group chats on Instagram and Ruby is always posting videos of pigs behaving like dogs.’

Juliet continues: ‘I like cooking a roast dinner and, while we have nut roast, I make Simon beef, which Ruby will look at with disgust.

‘Simon wouldn’t stand for them having their own shelf space or utensils — as long as they’ve been washed, what’s the harm?’

Interestingly, Simon, a technology company director, was himself vegetarian in his late teens and 20s, until a vitamin B12 deficiency caused pins and needles in his arms and led doctors to advise him either to take supplements or to go back to eating meat.

‘What worries me is the amount of processed foods many vegans eat, including meat substitutes, which could be worse for you than a fillet steak,’ he says.

But he admits he admires his children’s dedication.

‘They are thinking about the environment and are keen to bring about change.’ 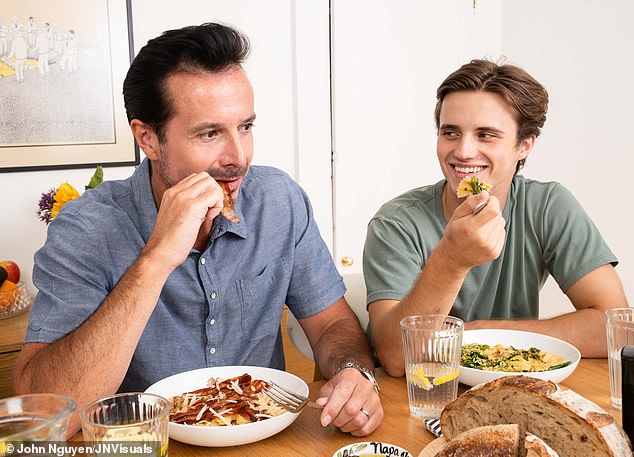 Simon (left), a technology company director, was himself vegetarian in his late teens and 20s

Livvy Rose, a psychotherapist, believes Simon is right not to allow his adult children to rule the roost in his own home.

Her vegan daughter, Amber, 24, is living with her while she saves money so she can do voluntary work with refugees.

‘If Amber tried to commandeer shelves in my fridge I would say: “Go and live somewhere else!” We want our children to have their values, but not to put boundaries on us,’ she says. 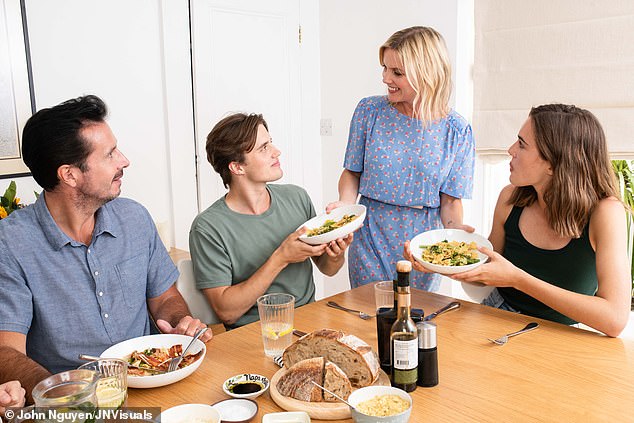 ‘Teens and twentysomethings can be arrogant, as I was, and believe they have all the answers while their parents know nothing.’

According to Livvy, it’s important for those living under the same roof to ‘agree to disagree’ on the need to follow a plant-based diet, as it is with any other points of tension.

She adds: ‘After all, it’s my home and if Amber feels that strongly she needs her own place.’