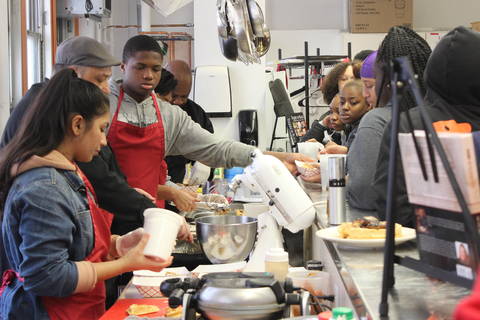 ROSELLE, NJ – Passion, opportunity and work – or POW – is the mantra that drives professional chef Jesse Jones to do his best each day.

Cooking saved “Chef Jesse” from a life on the streets. During his recent visit to Roselle’s Abraham Clark High School (ACHS), Jones explained to an attentive group of culinary students the difficulties he faced growing up without a father in the South and later in Newark.

Jones was invited to ACHS as part of the school’s Black History Month program to hold a live cooking demonstration and talk with students about his impressive culinary journey.

You have successfully signed up for the TAPinto Roselle/Roselle Park Newsletter.

As the culinary arts room filled with the delicious aroma of sweet potato waffles and maple syrup, Jones shared an inspiring story. He’s known across the country for his Southern-style cooking with a Country French twist, catering to celebrities such as Tyler Perry.

Jones began his career as a dishwasher. Growing up, he struggled with his passion for cooking because the kitchen was still viewed as a place for women.  “I’m a chef of color and that comes with a lot of challenges but I believe that the kitchen truly saved my life,” he said.

“Chef Jesse” attended Hudson Community Culinary Arts Program in Jersey City. But he inherited his passion for cooking from his mother, Mrs. Mildred Jones, and his grandmother, Mrs. Hannah Jones. He followed them around in their home kitchen in Snow Hill, N.C., honing his culinary vision and developing his flair for New Carolina Cuisine.

Over the years, Chef Jesse has authored two cookbooks, prepared meals for countless celebrities and is currently the private chef to Sunny Hostin of ABC’s “The View.”

With the help of his mother, Chef Jesse got his first job working at ARAMARK as a dishwasher. He quickly moved up the ranks in the back of the house. He blazed through salad bars, as third cook, as sous-chef and then was soon managing a staff of 60 at AT&T in Bedminster. Chef Jesse spent fifteen years at ARAMARK before leaving to receive a business certificate from Katherine Gibbs School for Business Management. While earning his degree, Chef Jesse worked a second job with Master Chef Dennis Foy at Town Square Restaurant in Chatham.

From there, he went everywhere. He appeared on VH1’s “Love & Hip Hop,” he writes reviews for TAPInto and the Star Ledger. He’s been featured on radio shows including 98.7 Kiss FM, Hot 97, two hungry women, The Ed Hitzel Show, and Basil with Chef Jennifer Booker.

“I’m excited to be here today because when I was younger, no one ever gave me a chance,” he explained to the students. “I’ve always been passionate about cooking but didn’t know what to do with that passion.”

Culinary arts teacher Jeff Wierzbicki selected three of his top students to assist Jones during his demonstrations. During the two sets, the students helped to prepare one of the chef’s favorite recipes: chicken and sweet potato waffles.

“It has been my honor to have my friend and fellow chef present his inspiring story to our students,” said Wierzbicki.

Several students from the school’s journalism and technology programs were also in attendance to create a video of the demonstration and document the experience.

“This demonstration has brought together students from different academic backgrounds to create a truly collaborative event for the students to enjoy,” said Evenide Fanfan Vilcean, Supervisor of Instructional Technology and CTE

“Our hope is that Chef Jesse’s visit has inspired some of our culinary students to go out and pursue their own dreams,” said Interim Superintendent Dr. James Baker.  “There is nothing stopping them, other than hard work and commitment.”

Jones lives in Irvington with his wife, two boys and “Zeus,” his Italian Mastif. He told the students he is happy to be a local. Perhaps they’ll see him enjoying a chili dog from Texas Weiner or John’s in Newark.

TAPintoRoselle.net is the official electronic news source for your town! To get your free daily Roselle or Roselle Park news, click on your town.

Report: Up to 85% of independent restaurants could close due to pandemic – Restaurant Business Online

This Dr Disrespect Cake Is An Absolute ‘Treat’ – EssentiallySports