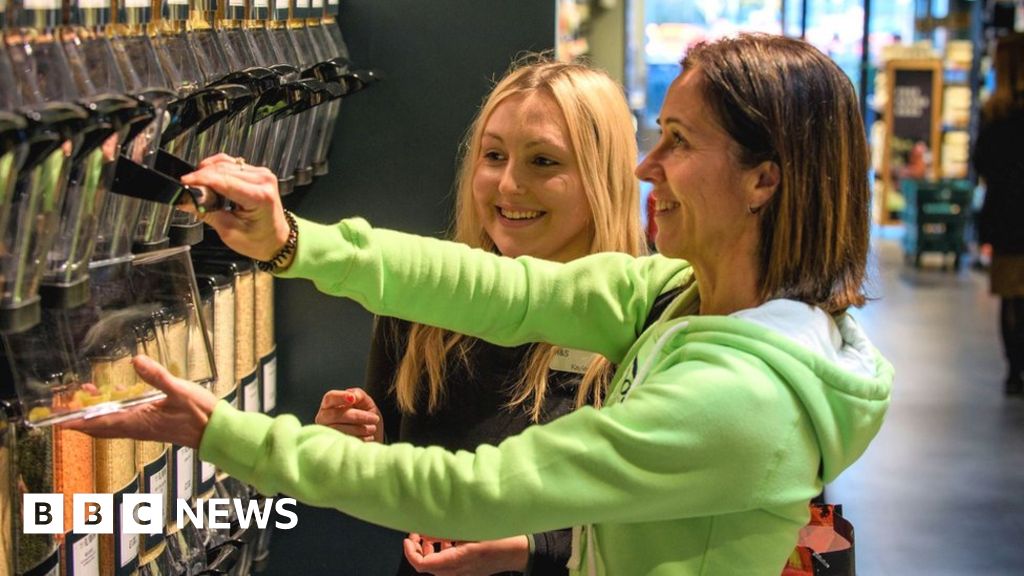 Marks & Spencer is to extend a trial of its refill scheme where shoppers can fill their own containers with food.

The trial will be extended at its Hedge End store in Southampton, and will be rolled out in Manchester this month.

A spokesperson said it was part of the supermarket’s “action to reduce plastic packaging”.

UK supermarkets are responsible for 58 billion pieces of plastic a year, according to Greenpeace.

The initial trial offered 44 plastic packaging-free products from coffee and cereal to sweets and pasta at the Hedge End retail park store. M&S said 25 of those products were now outselling packaged alternatives in the store.

The trial will also be extended to the firm’s Manchester city centre store, which will take part from March. The retailer said the success of the trial is down to the fact that consumers are trying to shop in a more environmentally-friendly way.

Three-quarters of consumers are trying to cut down on the amount of plastic they use, according to a survey of 2,200 adults carried out by YouGov for the supermarket. The research also suggested that customers struggled to find retailers that offered refill schemes, and also find carrying containers around inconvenient.

M&S’s director of food technology, Paul Willgoss, said: “Our ‘fill your own’ concept is one area we’re focusing on as part of our action to reduce plastic packaging and support our customers to reuse and recycle.

He added: “We’re keen to better understand refill across the entire store process from behind the scenes operations to working with our customers to encourage behaviour change.”

Previous research by the environmental charity Greenpeace suggested discount retailers like Aldi or Lidl might have further to go than other supermarkets such as M&S. It was ranked fourth out of the UK’s 10 biggest supermarkets for its plastic “footprint”.

M&S previously committed to introducing additional lines of loose produce and other alternatives to plastic across its UK shops.

Other pledges made by major UK retailers include:

Single-use plastic has become a major topic for discussion after the BBC’s Blue Planet II highlighted its effect on the oceans.

The BBC has also announced plans for a year-long series of programmes and coverage on climate change, as part of the Our Planet Matters project.

M&S’s environmental pledges come as the struggling company plans to shut more than 100 stores by 2022. But food sales remain a bright spot in its performance, offsetting weaker sales in clothing and homeware.

What does it mean for a wine to be ‘food-friendly’? Here’s what to look for. – The Washington Post