A clip of “News24” channel has gone viral on social media showing a maid’s bizarre act. The woman was caught on CCTV mixing her urine in the food that was to be served to her employer. Many social media users are posting the video with the claim that the maid is a Muslim, and employed by a Hindu. The claim says she was caught stealing once, for which her employer had installed CCTV in the house.

Facebook user “Drishtikone Bharat” posted the video with the claim, “Mr. Suri had employed a maid by the name Hasina. This Muslim woman was spitting, putting a glass under her clothes and peeing in it.. and mixing her pee in the food that she cooked for the family. She was caught in the act after CCTV was installed as she was nabbed stealing once. The family wanted to catch her in the act of stealing. Little realizing her special ingredient in the food she was serving therm. This is the level of hate!!”

As per the clip, the incident took place in Bhopal and the maid was working in the house of one Mukesh Suri. The viral clip does not include the details of the helper.

India Today Anti Fake News War Room (AFWA) has found the claim along with the video to be misleading. The video is nine years old and the maid was not a Muslim.

Till the filing of this story, the video was viewed more than 3,200 times and received over 250 shares. The archived version can be seen here.

With the help of related keywords, we found a news report by “TheTimes of India” on the incident. The report says that the name of the maid was Asha Kaushal.

Citing police interrogation, the report says Asha mentioned several reasons for the act, including her employer’s alleged undesirable behaviour towards her young daughter, for which she wanted to teach him a lesson.

We also found a report by “Jagran”, published on October 18, 2011, on the incident. This article too mentioned the maid’s name as Asha Kaushal.

AFWA also accessed the full video of the “News24” report. The full video carries the reporter’s version at the end. India Today reached out to the reporter, Praveen Dubey, for further verification. Dubey denied that the accused maid was a Muslim.

Therefore, it is clear that the viral post is misleading and the woman in the clip was not a Muslim. 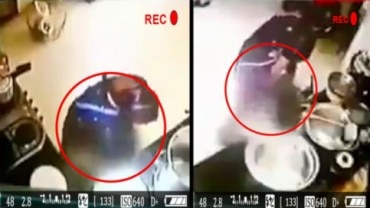 ClaimVideo is of Muslim maid mixing her urine in the food that was to be served to her Hindu employer.ConclusionThe incident is nine years old and the maid was not a Muslim.

The number of crows determines the intensity of the lie.

Want to send us something for verification?
Please share it on our at 73 7000 7000
You can also send us an email at [email protected]

Comfort and joy: 10 hearty, delicious vegan meals for an icy January – from lasagne to tiramisu – The Guardian