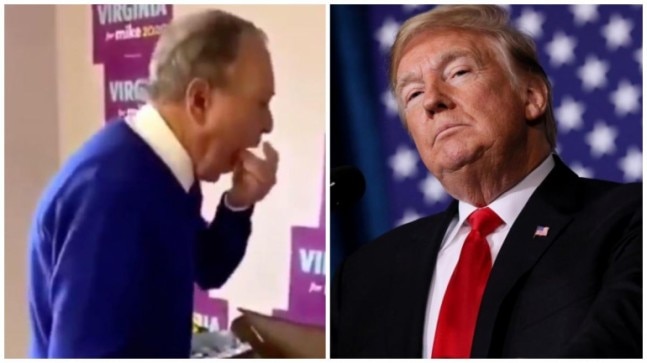 US President Donald Trump took a jibe at 2020 presidential candidate Mike Bloomberg today for licking his fingers after eating pizza amid the coronavirus outbreak.

Trump tweeted a Snapchat video of the former New York City mayor. In the clip, he can be seen eating crust of a pizza at a campaign stop. He then put the slice back into the box and licked his fingers.

Trump tweeted the video with the caption, “Mini Mike, don’t lick your dirty fingers. Both unsanitary and dangerous to others and yourself!” Take a look at the viral video:

Mini Mike, don’t lick your dirty fingers. Both unsanitary and dangerous to others and yourself! pic.twitter.com/LsKLZNeZL9

The undated video of Bloomberg eating the pizza also had a caption on it, which read, “When in doubt, rip the crust off.” After Trump posted the video it immediately went viral and garnered over 2.6 million views.

Ever since the worldwide outbreak of the virus, governments all around the world have been urging citizens to adopt hygienic measures like washing hands multiple times and avoiding physical contact.

Since Bloomberg was seen ripping the crust of the puzza and licking his fingers after eating it, people were left concerned. He also touched the cap of a coffee carton with the same hands. The video was immediately circulated on social media.

Here’s how people reacted to the video:

Mike Bloomberg, you forgot to lick your other hand before touching the coffee cap. #CoronavirusPatientZero

Talk to your veep pic.twitter.com/0L1H5E3S1A

Watching him makes me want to puke!

Gotta admit, if this video is real, that’s really gross for Mike Bloomberg to lick his fingers and then touch the coffee container that is shared with everyone else.

At the time of writing this article, the tweet already had over 32.4k retweets and 131.6k likes.

The coronavirus epidemic has till now infected tens of thousands of people in over 60 countries. In India, a total number of six confirmed cases were detected, with one case reported in the national capital Delhi.

ALSO READ: Coronavirus in India: 6 confirmed cases as Covid-19 outbreak knocks on Indian doors | All that has happened

ALSO WATCH | Coronavirus: From an epidemic to a global pandemic

5 Rules For The Best Tofu You’ve Ever Had, From Vegetarian Chefs – CBS San Francisco