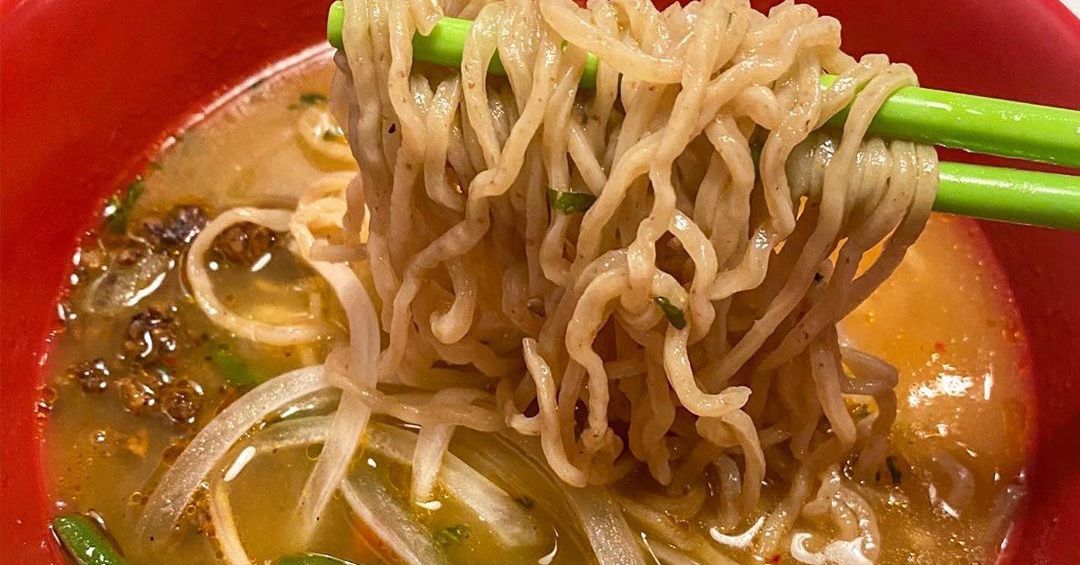 Vegans can choose between Persian-style ramen, almond-based mac and cheese, and mushrooms in vodka sauce at the new all-vegan food cart pod coming soon to Cully. Opening sometime this month, Shady Pines features six carts with indoor and outdoor dining areas, including a cheerful metal-sided building with turquoise walls, trinket shelves, and about 14 two-tops and four-tops. There’s even a legit bathroom with a changing station. Outside, diners can eat at picnic tables.

Last December, the owners announced that Shady Pines would open in January, but city permitting is holding things up, says Lukkah Churchill. He and his business partner, Ashley Butler, co-own Fatsquatch, a vegan fried food specialist cart formerly on SE Belmont. Butler also co-owns Arrow Coffeehouse and Bow & Arrow Coffeehouse, located in Portland and Damascus respectively. Churchill and Butler are responsible for founding Shady Pines, along with their wives, Christine Neary and Lindsey Butler — Lindsey lends her administrative and management background, while Neary has been working on Fatsquatch and Shady Pines from the start.

“I am so excited about this idea,” says Churchill. “Food cart pods are such a part of Portland culture… before Portland started knocking down all the bars to put in condos. To be able to go to one and have my choice of what I want to eat at every single cart, I’ve never had something like that.”

Below, find a breakdown of all Shady Pines’ food carts, from a mushroom main course through vegan soft serve.

Mushroom-obsessed chef makes guest appearance at Fatsquatch
Fatsquatch will be on hiatus through most of 2020, which allows chef Tom Fuller to experiment with a new concept: Instead of the cart’s usual vegan stoner food, Fuller will cook his own mushroom-focused recipes under the name Earth Tone. Diners can try vegan fish and chips made with oyster mushrooms, mushroom stroganoff, and spicy vodka sauce over mushrooms. Churchill may make guest appearances to whip up some Fatsquatch specialties like jalapeno poppers and hand-breaded “notzarella” sticks.

Mac and cheese, all dressed up and vegan
Taylor Solomon and Nathaniel Perales, owners of Avocadamama, have been traveling around Los Angeles recently doing pop ups. Now they’re expanding north to Portland to serve their almond milk-based mac and cheese at a new Shady Pines cart. “I had this vegan mac and cheese recipe for years that was super famous among my friend group,” says Solomon of her inspiration to start the biz. While the menu mainly riffs on mac and cheese by adding buffalo cauliflower or shredded barbecue jackfruit, Solomon and Perales will introduce new brunch items to their Portland cart, including a tofu-based eggs Benedict and breakfast nachos. Diners can also order a gluten-free version of Avocadamama’s original mac and cheese.

Japan, meet Iran
Armon Pakdel brings his Persian culture to this vegan ramen cart, while his partner Zoe Lichlyter brings her Japanese heritage. “The cliché is that Persian food is always a banquet, while Japanese food is minimal and compact,” says Pakdel. “What if you took Persian food flavors and decadent things and then compressed it into a Japanese minimalist format?” You’d get Safframen’s small menu of three vegan ramens, including a saffron-heavy Persian-inspired ramen modeled after the flavors of Pakdel’s favorite childhood dish, and the popular Konkatsu corn and potato ramen. Pakdel and Lichlyter have worked in restaurants for many years, but just started doing their pop-ups about a year ago, and are excited to have a stable home for Safframen at Shady Pines.

Sushi is more than fish food
Formerly a Sellwood favorite, Sushi Love will now split its time between a brick and mortar location in Oregon City and a food truck at Shady Pines. Even sans fish, these rolls can get complicated, such as the “full kitchen alchemist,” which features soyrizo, avocado, jicama, crushed tortilla chips, cilantro and sin queso sauce.

Vegan food from the South
Mother-and-son team Kim and Alkebulan Moroski are relocating from Mississippi (the state, not the street) to open Dirty Lettuce. When the state passed a law last year prohibiting the sale of plant-based meat substitutes (which was later revised to be far more flexible), the Moroskis decided it was time to transplant their Cajun and Creole vegan dishes to Portland. Diners can sample their vegan takes on jambalaya and fried chicken, shrimp étouffée, and even “catfish” made from seitan.

You can make ice cream from mushrooms and chocolate
Vegans love ice cream as much as anybody else. Ramblin’ Rose delivers the vegan soft serve in unusual flavors like jet black cold brew, nectarine saffron, and reishi mushroom with cacao. Visitors can choose toppings like rose petals, hibiscus syrup, or doug fir-infused sugar, all of which owner Mary Allen prepares herself. “I inherited this truck from a friend,” she said. “He passed away but he always wanted an ice cream machine in it.” Allen started her ice cream truck as a summer-only business in 2018.

Save when dining out with an amazing Restaurant.com deal – New York Post

How to Eat Vegan at Olive Garden: the Ultimate Guide – VegNews