A company affiliated with Kairoi Residential has filed preliminary plans for the project with the State of Texas.

The planned 8-story Lake Cliff Apartments would take up a big chunk of the block at 120 E. Colorado Boulevard in North Oak Cliff.

The El Fenix Restaurant – which dates to the 1940s – and other buildings on the block including the former Polar Bear Ice Cream store on Zang Boulevard – are all owned by a unit of Firebird Restaurant Group. 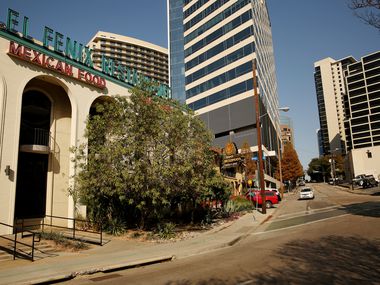 Firebird CEO Mike Karns confirmed the properties are under contract but have not yet sold. He would not discuss the buyer or potential sales date.

Even so, Kairoi Residential’s Fenix TX Owner LP filed plans with the state with details of its 352 unit, almost $30 million apartment project proposed for the site.

The more than half million square foot project would start in April and be finished in 2022.

The San Antonio-based real estate firm is one of the state’s top apartment builders, with one project already in the works in North Texas.

The developer is about to start construction on at 12-story, 146 unit apartment project on Maple Avenue in Uptown Dallas next door to the Crescent.

And Kairoi has another rental project in the works at the Legacy business park in West Plano.

Firebird Restaurant Group is also seeking a buyer for the landmark El Fenix Restaurant on the north edge of downtown Dallas.

The almost four acre site of the more than century old restaurant is at Field Street and Woodall Rodgers.