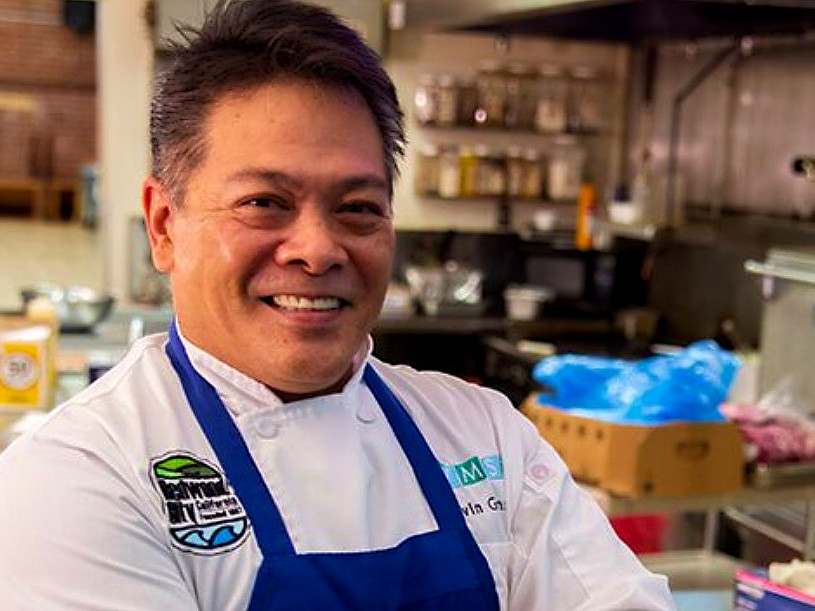 The road to becoming a professional chef can be a very long and rocky one, with multiple twists along the way. There is culinary school, then the slow slog through the hierarchy of kitchen staff to climb: porter, station chef, line chef, line cook, sous chef, head chef to the to the top—executive chef. Since those who choose this profession usually begin after completing college, Gavin Gonzado’s rise to executive chef is pretty impressive: He got his start as a dishwasher.

That’s the beginning of Gonzado’s most unusual journey through the cooking world. He’s a veteran of upscale restaurants in Hawaii and California, dishing up choice fare ranging from foie gras with Bing cherry compote to seared duck breasts and gooseberry jus. But over seven years ago, he opted for what some might consider a comedown in the cooking world’s pecking order: Gonzado is the chef at Redwood City’s Veterans Memorial Senior Center. Four days a week, he dishes up lunches of restaurant quality to his appreciative elderly clientele, and kicks it up a notch for special occasions.

“I serve other venues like a venture capital company in Palo Alto that keeps me in the industry trend where I can practice my skills,” Gonzado says. “Serving the senior center was a huge transition. I had to watch how I seasoned and cooked my meals. I consider that an important technical advancement in my culinary education.”

The 52-year-old Gonzado, whose identical twin brother Greg is also a chef, is a San Francisco native, one of seven siblings. His father was an oil-commodities broker whose territory included Hawaii. Traveling back and forth to the islands was so constant that the family decided to move there. By the time Gonzado was eight years old, he had traded his warm jacket for a flowered shirt and surfboard.

He first became interested in cooking at age 16 while working as a dishwasher at the Hard Rock Café in Honolulu. Learning by paying careful attention to the hectic activity of a professional kitchen, he slowly worked his way up to sous chef.

That is the person who makes sure everything gets done in the kitchen before the chef arrives. This includes managing other employees, from dishwashers to food safety/prep people. The sous chef essentially is the chef’s right-hand man. The chef handles day-to-day menu planning, as well as for events and of course, creates and prepares recipes. Gonzado continued to grow within the industry. Working at various high-end restaurants in Honolulu, he managed to connect with many of the top chefs.

“I was lucky and met up with the right people in the hospitality business, executive chefs from the big hotels in Hawaii,” he says. The most important was William Trask, president of the Hawaiian chapter of the American Culinary Association, a professional organization for chefs founded in 1929 in New York City; who took him under his wing. Trask saw something special in the hard-working youngster and helped the young man advance in a career in the food industry. Unlike many chefs who attended culinary school, Gonzado learned on the job as an apprentice.

From the Hard Rock Café to the Ilikai Hotel with chef Trask, Gonzado paid his dues in pursuit of the prized position as a chef. Gonzado worked in various upscale restaurant kitchens in pursuit of his goal to become a chef. Finally, after 10 years he got that job at the Lobster and Crab House in Honolulu.

In 2000, Gonzado returned to California, “I’ve always considered California my home and wanted to come back,” he says. Settling first in Pleasant Hill, he worked at the Pepper Mill restaurant. He finally made his way to Redwood City in 2006, where he met his wife, Gail. They married and now have a 13-year-old daughter Marissa, who attends Kennedy Middle School.

One might think he’d arrived at the end of his career journey, since he had made it as a bona fide chef. But the man who had gotten that far without formal training decided it was time for culinary school and attended the Auguste Escoffier School of Culinary Arts in Boulder, Colorado. “I felt it was very important for me to further my education to be the best chef I could be,” he explains.

Fortune was still with Gonzado. One day in Redwood City he was walking down Theatre Way and saw construction going on at a new restaurant called the Portobello Grill. Popping his head in, he asked the first person he met if they were seeking a chef. That person happened to be owner Kamran Mahrouzadeh, who replied in the affirmative. Gonzado explained his background and offered to prove his worth.

After his shift at another restaurant, he went home and designed a menu, then made a beeline to Whole Foods, returning the next day to the Portobello Grill to prepare a “tasting”—essentially an entire menu of dishes, including entrées, salads and main dishes—while Mahrouzadeh observed how he moved about the kitchen, prepped, cooked and plated each dish.

Mahrouzadeh was impressed enough to hire Gonzado on the spot. “We opened in July of 2007 and it was crazy,” Gonzado says. “Watching the transformation of Theatre Way was overwhelming.” It was the beginning of high-end restaurants in Redwood City and the Portobello Grill’s popularity was immediate.

“We have a small kitchen and Gavin worked very well in that environment,” Mahrouzadeh says.  “A lot of chefs need large kitchens and lots of tools, but Gavin was adept at making everything happen with what was available. He relied more on himself and his abilities. It was awesome working with Gavin—he was very talented and easy to work with.”

But a seven-day diet of hectic restaurant work can take its toll. “Seven years is a lot of time at a restaurant,” says Gonzado. “It can be chaotic in a small kitchen, and on the weekends, I could have a staff of six working in there.”

Bruce Utecht, Redwood City Community Services Recreation Manager, was a frequent customer of the Portobello Grill. He got to know Gonzado casually and eventually invited him to join a group of his friends who enjoyed fishing at the Port of Redwood City during the summer. Utecht would bring along his barbecue and the friends would cook up their catch right there and have a feast.

One day Gonzado asked Utecht what he did for a living. Upon learning about the lunch program at the Veterans Memorial Senior Center, Gonzado offered to volunteer as a cook. “He wanted to give back to the community and seniors had a special place in his heart,” Utecht recalls. He thanked him but at the same time was happy to offer a paying gig, as the position of lunch and special event chef had just opened.

Within a couple of months, Gonzado had left the Portobello Grill to cook for the senior center, at the same time getting himself established to offer similar services to other senior clients. That was six and a half years ago. “The seniors love him and they love his food,” says Utecht.

The new job in a senior center kitchen provided Gonzado with the pace he was looking for.  Meals were much simpler and the preparation less intensive. The kitchen at the senior center located on Madison Avenue is larger than a typical restaurant’s.

Arriving at 8 a.m., he spends the next four hours prepping dishes featuring homestyle comfort food found in restaurants, such as bistro and hangar steak, salmon, shrimp scampi, lobster rolls and salads. For Valentine’s Day, he served tiger prawns over thin spaghetti.  The meals for St. Patrick’s Day and Thanksgiving are traditional: corned beef and cabbage on March 17 and roast turkey, green bean casserole and pumpkin pie in November.  Meals that could cost well over $18 in a restaurant are just $10 at the senior center because the program is subsidized by grants.

His staff of eight to 10 people (up to 20 for special events) is all volunteer, but Gonzado sees them as employees. He smiles when he talks about why they’re so enjoyable to work with: “They don’t give you a funny look when you ask them to do something.”

Retiree Pat Jones, who was a nurse at Sequoia Hospital for 40 years, is one of chef Gavin’s volunteers. “I always enjoy working here,” Jones says. “The food is very good and Gavin is an excellent manager. He is strict, in the areas where he should be, but is kind in correcting me when I make a mistake. And I do make mistakes.”

“Gavin, don’t you dare leave us,” says Jodi Walsh, who eats lunch at the senior center every Tuesday and Friday. His volunteers feel the same way.

“Usually we would have chefs last around here for about two years before they were off to something else,” says Utecht, “but the seniors here would be pretty upset if Gavin were to leave.”

“I kind of miss the madness of being in a restaurant kitchen,” says Gonzado. “It’s a kind of a sickness every cook or chef has. The energy, sounds of pots and pans clanging, voices calling out orders. It’s a fun environment and rewarding.”

The last 15 minutes before serving begins is what gets Gonzado’s heart pumping. “When we are laying out the food,” he says, “it is go time.”

This story was originally published in the March print edition of Climate Magazine.

Calorie count on restaurant menu cards to be made mandatory by 2022 : FSSAI – BusinessLine