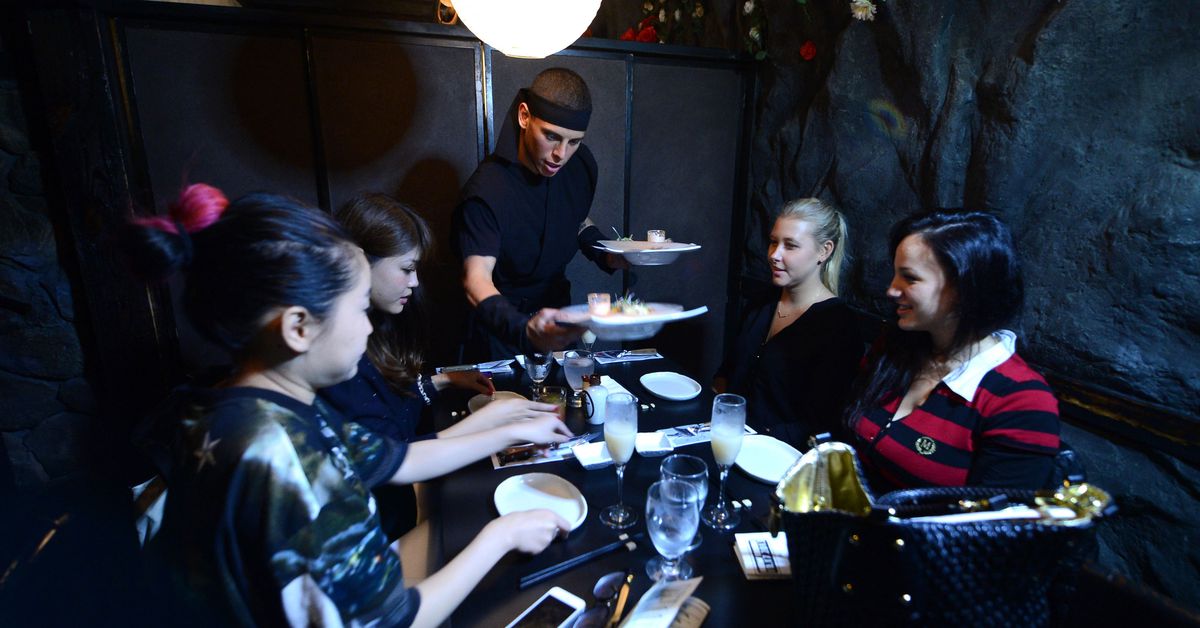 The beloved yet critically panned Ninja — the wacky, theatrical Tribeca Japanese restaurant where servers dressed up as, yes, ninjas — has closed after 15 years, Tribeca Citizen reports. A sign posted at the entrance, at 25 Hudson Street, near Duane Street, informed customers of the seemingly abrupt closure, but a message on the restaurant’s website indicates that the subterranean sushi haunt lost its lease. Eater has reached out for comment.

Ninja opened after a $3.5 million buildout in 2005, fitting the underground space with fake stone walls, fake torches, and pagoda-like dining booths that seemed to resemble prison cells. Soon after its opening, one brutal reviewed followed the next. New York Times critic Frank Bruni was first on the scene writing that “Ninja acts like a Disney ride — Space Mountain under a hailstorm of run-of-the-mill or unappealing sushi — but charges like Le Bernardin.” Eater declared it an off-the-rails shitshow restaurant.

Indeed, meals at Ninja could easily cost upward of $100 per person, but dishes like creme brulee topped with steamed veal and foie gras, a soup with clam and pork, and crab served on grapefruit only evinced a shrug from critics.

But the theatrics at the restaurant, an offshoot of a similar establishment in Tokyo, generated the greatest interest from diners — and were the focal point of most of the derision. Waiters dressed in black outfits would dart out of nowhere to surprise diners, sometimes even slipping a fake blade into a dining booth through a set of bars. Some dishes resembled towering infernos before they were dropped on to the table, while others required diners to hack into a thin, crackly sheet that broke into shards of croutons into a salad placed below it.

Still, the restaurant’s popularity endured, and diners kept packing the underground booths. In a 2008 revisit to Ninja, Eater begrudgingly admitted that tolerable food meant it was no longer a shitshow. The inexplicable, overpriced extravagance endeared it to many — a stream of the most recent four and five star reviews on Yelp are one indication — and is a reminder of the continued popularity of themed restaurants in New York City, perhaps most notably and similarly Greenwich Village’s Jekyll and Hyde Club.