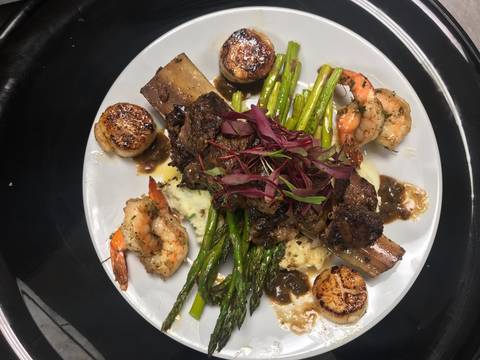 (EAST ORANGE) – In East Orange, the children in the public school district are eating food inspired by the same chef who cooked for celebrities and athletes such as, Cicely Tyson and Tom Brady. Now lucky students and their families will have an opportunity to experience upscale meals prepared by the Chef himself, who organized a program to teach the art of fine dining.

His culinary journey began when he opened “Byron’s Famous Fish House” in Irvington. News of his delicious food spread and Chef Byron began to gain momentum that spilled over into the world of the rich and famous.

Invited on Power 105.1 “Star and Buck-Wild” morning radio show to feature his cuisine, he was introduced to four million syndicated listeners. This new level of popularity enabled him to begin growing his brand and business by expanding into mobile food trucks.

Chef Byron was originally a self-taught chef when he began to cook for celebrities. Although not lacking in skill, he desired to formally train in the culinary arts. In 2010, Chef Byron graduated from FSTA Culinary School and then furthered his studies at Stella Culinary Academy in California.

While still operating food trucks in New Jersey, he became an Executive Sous Chef in Manhattan and then was quickly promoted to Senior Executive Chef, preparing food from all over the world.

Word again spread and Chef Byron was requested to cook for NFL teams such as the Green Bay Packers, Jacksonville Jaguars, Seattle Seahawks, Dallas Cowboys, and the New England Patriots. The NHL caught word of his delicious creations, followed by NCAA Basketball teams, and the 2019 USA Men’s National Soccer Team. “Not many chefs can tell you how Tom Brady likes his eggs,” said Chef Byron.

Being on the grand stage of fine dining also allowed him to be a part of the Corporate Hilton Hotel and Spa (the only hotel awarded the “Black Diamond Hotel Award”) sponsored by Forum Hotel and Spa Paris France.

Chef Byron has hosted and catered upscale events for Ms. Kiki Haynes, an actress on “For Better or Worse,” an American tv sitcom created, written and produced by Tyler Perry, and all vegan cuisines for the iconic, multi-talented, award-winning actress, Ms. Cicely Tyson.

In 2017, the opportunity to come back home to where he was raised and to bring great healthy food with him presented itself. Hired as the East Orange School District’s Executive Chef, he created a program called “Dining with Chef Byron.” The event kicked off on February 28, 2020, ironically at Cicely Tyson School of Performing and Fine Arts. It was there that the student of the month and her family won a contest resulting in a feast of gourmet foods prepared by Chef Byron himself.

“The goal of this program was to teach the student dining etiquette, how to set the table, proper utensil usage and dining sequence in an upscale white table cloth environment,” said Chef Byron.  The meal consisted of a five-course dinner and an upscale carte du jour.

Ecstatic and pleased, providing rave reviews, the family also had an opportunity to participate in a short cooking class at the end of dinner.

“I would like to thank Cicely Tyson School of Performing and Fine Arts Administrators that helped this vision come true, Principle and Assistant Principle Mr. English and Mr. Williamson and Sodexo Staff: Yolanda Shivers, Denzel Turner, Karrena Jefferson, and Tracy Jones. I am completely grateful for their support of this successful event,” said Chef Byron. “This was just the first time we are doing this, but it will not be the last.”

TAPinto East Orange/Orange is an online newspaper serving East Orange and Orange. We are a locally owned news organization accredited by the New Jersey Press and Association. We take pride in providing the community with objective news, fact finding reporting, while featuring positive stories and awareness campaigns daily.

Got a news tip or opinion? Interested in advertising? Looking to write a column or to provide freelance reporting? Email us at [email protected]