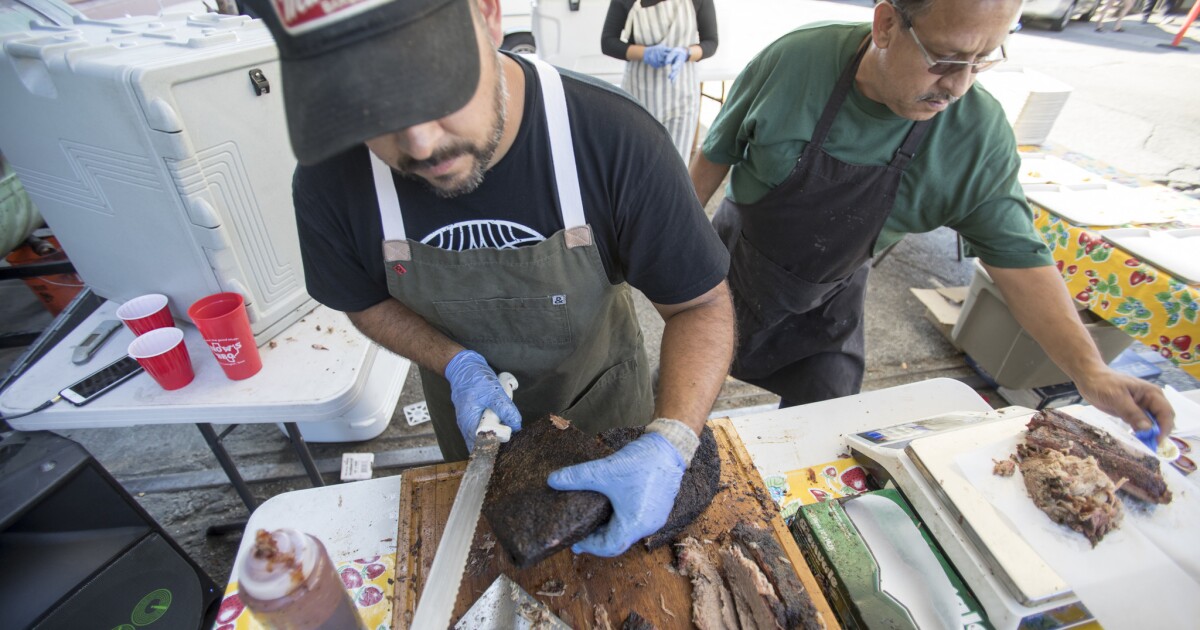 But there was one problem: Muñoz is the chef and owner of Moo’s. As far as he knew, Moo’s had never fulfilled a delivery order during its three years in business. And there was no way delivery was available each day from 10 a.m. to 5 p.m., as the website promised; Moo’s only sold barbecue on Sundays at the Smorgsburg food festival and during events at local breweries.

“I was surprised that [the Grubhub page] had a full menu, pretty accurate pricing, and what seemed to be recent photos of our sausage, brisket, ribs, sides, more than half the menu. It made me wonder who set it up,” Muñoz said. “My initial concern was someone was selling out of another restaurant and using our name to deceive customers.”

Then, the story got weirder. Muñoz placed an order through Grubhub app for his own barbecue, set to be delivered to the commissary kitchen where he prepares food for Moo’s.

Almost immediately he was able to track the delivery driver through the app, noticing that the car seemed to circle ROW DTLA — the shopping complex adjacent to Smorgasburg — before canceling the delivery. The order was then passed to another driver who went through a similar loop-de-loop and eventually marked the food delivered, despite no ribs changing hands.

After attempting to contact the driver, Muñoz said he reached out to Grubhub support to receive a refund. He also expressed concern that his business wasn’t being legitimately represented on the company’s website.

“My worry was that if I didn’t see this, someone would have gone through the same process I did and then blame Moo’s for their experience.”

Muñoz isn’t the only chef expressing concerns over online ordering services offering delivery from restaurants without their permission. In January, Pim Techamuanvivit received a call from a customer inquiring about an order made from her San Francisco restaurant Kin Khao through the Grubhub-owned platform Seamless, despite the restaurant explicitly not offering delivery.

“They can’t totally fake a restaurant that doesn’t do delivery and go pick up food from, I don’t know, some rat-infested warehouse somewhere and deliver to my guests,” Techamuanvivit told the San Francisco Chronicle.

According to Grubhub, a majority of orders the company processes in the 2,700 cities where it operates are from restaurants with which it has an explicit partnership. But restaurants deemed to be in high demand are occasionally added without such a partnership; in those situations the company tasks the driver with ordering food ahead of time or at the restaurant before delivery.

Muñoz said that a representative from Grubhub sent him an online form to have his business removed from the site, but added that he was told the process would take 48 to 72 hours before the listing was deactivated. “It’s a little frustrating because I have to go through this process when I didn’t even consent to put it on the platform to begin with.”

Muñoz also said that after he posted about the ordeal on Instagram, many of his followers reached out to share experiences where they had seen Grubhub delivery from restaurants that didn’t offer takeout or weren’t open for business during listed hours.

If passed, the legislation — sponsored by California State Assemblywoman Lorena Gonzalez (D-San Diego), who previously introduced the AB5 bill regulating gig economy workers — would prohibit restaurants from being featured on delivery apps without a prior agreement in place.

“We need to level the playing field for mom-and-pop restaurants that are being taken advantage of by big tech,” Gonzalez said in a statement. “Restaurants shouldn’t fear losing their customers when they don’t agree to the conditions of some multi-million dollar food delivery app.”

Muñoz said that although he isn’t opposed to delivery apps — he often uses Postmates to order sushi for his kids after getting home from work, he said — he feels the arrangement doesn’t make sense for Moo’s, a limited supply pop-up whose loyal fans often wait over an hour for its brisket and ribs.

“If they want you to be on their app they should at least speak with you first, instead of going behind your back,” he said. “It just becomes one more thing you have to worry about as a business owner.”

As of Tuesday afternoon, the Grubhub delivery page for Moo’s Craft Barbecue was still active.