The Texas Rangers’ concessions company has won the prize every year for the most outrageous new foods at a sporting event in Dallas-Fort Worth. These ballpark bombs sometimes rival the State Fair of Texas’ fried foods, even.

For the Rangers’ 2020 season at the new Globe Life Field, Delaware North Sportservice chose not to debut any new 24-inch-long foods. Those had previously been a tradition at Globe Life Park since the debut of the 2-foot-long hot dog called the Boomstick in 2012.

The Boomstick will be sold at the Rangers’ new, air-conditioned stadium.

For 2020, the Rangers’ new foods seem to be more focused on crowd-pleasers with a twist. There’s the foot-long hot dog topped with jalapeño-cheese grits. And the nacho stack that measures 6 inches high, with crispy tortillas the size of dinner plates. Baseball fans will also find a new sausage roll made with, surprise!, rattlesnake meat.

The new ballpark will have 47 concession stands, 20 bars and 11 kitchens.

We’ll update this story if the threat of coronavirus causes changes for Opening Day at Globe Life Field. For now, we know that the Texas Rangers’ opening series with the Seattle Mariners will not take place in Seattle from March 26-29.

The Rangers’ Opening Day is scheduled for March 31 at the new Globe Life Field in Arlington. 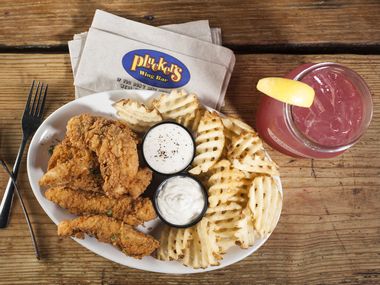 We’re not sure how to eat this tall tower of meat and cheese; that’s for you to figure out. The Stack is essentially a nacho plate built on a tier of tostadas, stacked 6 inches high. In between crunchy layers, fans will find pulled pork, Rico’s nacho cheese sauce, jalapeños and chili. They say it’s perfect for sharing, but how? Challenge accepted.

It’s explained as “a new way to look at a nacho,” says Casey Rapp, general manager of the concessions group Delaware North Sportservice.

Available inside the ballpark at the State Fare Midway and Turnpike Tex Mex Stand.

The Texas Rangers’ concessions team started adding vegan items to ballpark stands in 2016, and it’s become a yearly tradition. The meat-free effort earned Globe Life Park the title of most vegan-friendly ballpark in the country, according to PETA, in 2017. This year, the notable meat- and dairy-free dish is vegan mac and cheese. The cheese has a cashew base, a common ingredient used in vegan cheese. The stadium has two vegan stands.

Available inside the ballpark at the Visiting Vegan Cart near section 16. 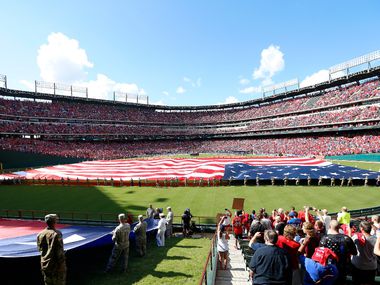 Of course the ballpark is serving a hearty sausage plate, but this one will make some noise: The Rattler is made with rattlesnake sausage. Yes, from snakes. It comes served on a hoagie bun, topped with “venom sauce.”

Of all the new items, Rapp says The Rattler is his favorite.

Available inside the ballpark at Abner Doubledogs in section 121 and on the main concourse.

In lieu of a new 24-inch hot dog in 2020, Delaware North Sportservice opted for a foot-long hot dog called The Grit Dog. It comes loaded with jalapeño cheese grits, chili, nacho cheese and pico de gallo. This ‘dog, like many at the stadium, is made with Nolan Ryan Beef.

Available inside the ballpark at Barrel Up Bars in the lower, main and upper concourses.

You can thank a Rangers fan for this new addition. After a Twitter contest, one fan’s recipe for brisket egg rolls was chosen to go on Globe Life Field’s permanent menu. They’re made with a bundle of smoked brisket, rolled up and deep fried. The dish comes with sides of fried rice and Sweet Baby Ray’s barbecue sauce.

Available inside the ballpark at State Fare Midway in section 29.

While the items above seem to be the most newsworthy, the ballpark is selling several other new concessions. Those include crispy chicken tenders on top of biscuits, smothered in gravy; funnel cakes; and Blue Bell ice cream sandwiches where customers choose their own ice cream flavor, served smushed between two cookies.