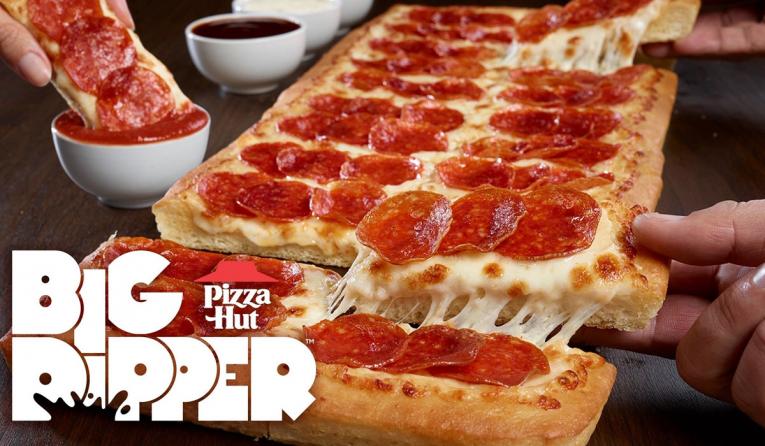 In celebration of decades of culinary feats, and with a renewed focus on abundant, classic pizza creations in 2020, an original Pizza Hut masterpiece is returning to menus nationwide. Now for a limited time, the Big Dipper Pizza is back.

The Big Dipper serves up 24 pieces of cheesy goodness alongside four epic dipping sauces (two marinara, one ranch and one honey BBQ)—a huge value for just $12.99. The Big Dipper is available in cheese or pepperoni (or half cheese, half pepperoni).

The return of the Big Dipper marks the first of several Only from Pizza Hut classics – as well as all-new pizzas– expected to grace Pizza Hut menus this year. Fans can look forward to more limited-time comebacks of the most famous hot from the Hut favorites throughout the year, as well as an even greater focus on making everyday menu pizzas better than ever.

“The Big Dipper is a Pizza Hut fan favorite. With 24 pieces of pizza and four dipping sauces, it’s a craveable pizza packed with flavor and fun,” says David Graves, chief brand officer, Pizza Hut. “Pizza Hut was built on providing the best tasting and most innovative pizzas in the industry. The Big Dipper is no exception. It’s a Pizza Hut classic, reimagined to deliver an unbeatable taste that customers can only get from Pizza Hut.”

The Big Dipper can be delivered straight to your door and is here just in time for March Madness watch parties nationwide. As Pizza Hut is the Official Pizza Partner of the NCAA, your game time pizza for the entire squad is in good hands, ready to be delivered hot and fast. And when we say the Big Dipper is BIG—and the perfect pizza for your March Madness watch parties—we have the math to prove it:

Pizza Hut will be on-site in Atlanta during the Final Four to fuel fans closer to the action. Throughout the tournament, Pizza Hut will hit the streets of Atlanta via the Pizza Hut delivery fleet to hand out over 8,000 slices of free pizza. Look out for the fleet at iconic Atlanta spots including Krog Street Market, the College Football Hall of Fame, Vine City Station and more. Fans can also stop by the Pizza Hut™ Fan Zone at the Final Four Fan Fest presented by Capital One for even more ‘za and the chance to win one-of-a-kind prizes.

The Big Dipper is available now for a limited time for delivery, carryout or dine-in at Pizza Hut locations across the country, starting at just $12.99. Product availability, prices, participation, delivery areas and charges and minimum purchase required for delivery may vary. Delivery charge is not a driver tip.

News and information presented in this release has not been corroborated by QSR, Food News Media, or Journalistic, Inc.