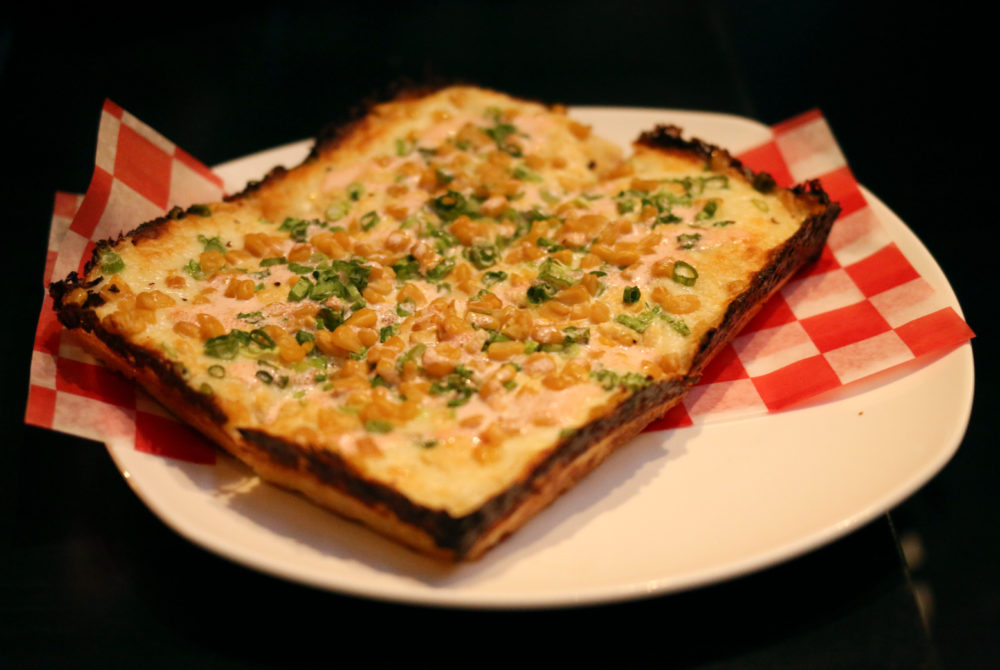 Wafu-Italian cuisine, the combination of Japanese and Italian tastes, has been popular in Japan for decades. But you can find it close to campus at Tonari, a new restaurant in Chinatown.

Tonari’s storefront at 707 6th St. NW is sleek with an all-black facade, aside from two bright white decals of a small Japanese lantern and sign that read “Tonari” in bold, black font. Inside, the restaurant keeps the same sleek and monochromatic wood and black aesthetic.

The first, smaller floor of the restaurant features bar-style seating and a couple of wooden booths. The upstairs area, which is larger and can accommodate more diners, has both traditional restaurant seating with booths and tables and horigotatsu-style seating – a type of Japanese table that is close to the floor with a depression underneath, allowing diners to stretch out their legs.

The white brick walls and black wood floors, tables and chairs allow the diners’ eyes to be drawn to the vibrant green moss garden – another homage to Japan – in the center of the dining area.

Tonari’s menu is straightforward and divided into three sections: antipasti, pasta and pizza all made with a Japanese twist. You can start off your meal with a small plate like cold tofu ($8) accompanied by anchovy, extra virgin olive oil, shoyu – Japanese-style soy sauce – and scallion or ricotta ($8) topped off with snow peas, edamame, yuzu vinaigrette and black pepper.

The restaurant highlights its pastas and pizza, which combine flavor profiles in a way I had never seen before in the District. Opt for the uni pasta ($17), which is based with bigoli – a long and thick strand pasta typically made with buckwheat or whole wheat – and topped with uni, soy, Japanese rice wine, butter, sake, soup stock and dried seaweed. For a simpler dish, try the kinoko pappardelle ($17) with Japanese mushrooms, garlic, shoyu, shisito peppers and butter that’s seasoned with garlic, green onion and seaweed.

The pizza options drew my attention the most. All the pizza dough is made with imported flour from Sapparo, Japan before being cooked in a square pan coated in rice oil, which gives the crust an extra crunch. Pizza options range from clam ($16) with oregano, garlic, pecorino romano cheese, seaweed, miso and brick cheese – a type of popular Wisconsin cheese – to pepperoni ($16) with brick cheese, tomato sauce and shoyu-jalapeno pickles.

I chose the mentaiko and corn pizza ($16) topped off with brick cheese, scallions, a corn puree mixed with Japanese Kewpie mayonnaise and mentaiko cream, which is made with the roe – or fish eggs – of pollock or cod. The dough was by far the standout of the dish,  with a dense and thick interior and a crispy, crunchy crust.

I’ve never had corn or scallions on pizza before and had never even tried mentaiko cream, so I was slightly hesitant about the combination of flavors. The sweet corn and flavor-packed scallions paired nicely together in a sweet oniony combination, especially with the gooey and thick layer of brick cheese.

But I wasn’t super sold on the addition of the mentaiko cream. Although it fit with the Wafu theme, the cream was a little too fishy and salty for my palette and next time, I would probably ask for it on the side.

On your next venture to Chinatown, opt for the mix of Italian and Japanese flavors at Tonari.

This article appeared in the March 12, 2020 issue of the Hatchet.