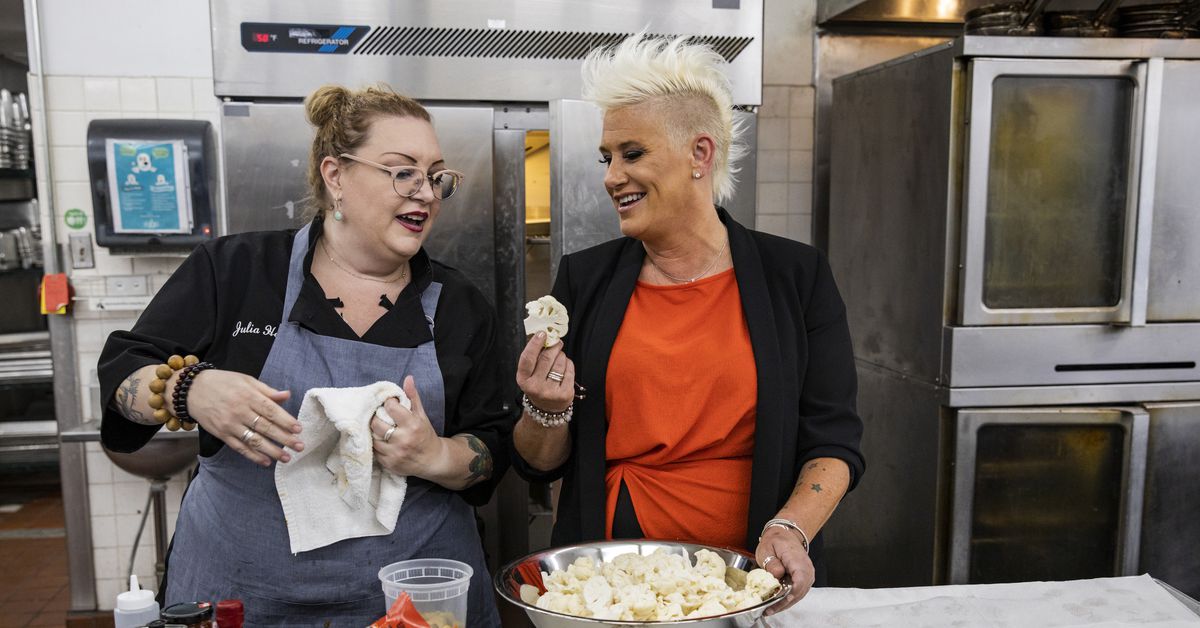 Julia Helton’s time on Food Network’s Vegas Chef Prizefight is over. Helton (Angelo’s Wine Bar, Village Tap) was eliminated on the second week of the reality TV show which aired Thursday. Helton started on rocky terrain after judges called her out in the show’s first episode and warned her she needed to improve. On Thursday, her pork fajitas were dry thanks to an oven mishap. Helton would reveal that she is a cancer survivor and that the disease was in remission: “I’m upset i just got cut, I didn’t want to go home. I’m very tenacious and I know that. I mean cancer came for me and it didn’t take me.” She resolved to return to Chicago. A second Chicago chef, Lamar Moore (Swill Inn, Currency Exchange Cafe), continued to cruise. He made an open-faced burger with a fried macaroni and cheese bun. Guy Fieri’s son, Hunter, was a guest judge and said he wanted more Mexican flavor so it could be served at Guy Fieri’s El Burro Borracho. Judge Anne Burrell said the dish needed a complement, cringingly asking Moore to plate the dish with “an amigo.”

Last week, Fifty/50 Restaurant Group, which includes Utopian Tailgate, Roots Pizza, and Steadfast, took over operations at VU Rooftop Bar near McCormick Place. Fifty/50, which started as a Wicker Park sports bar, now has four rooftop spots (Apogee, Utopian Tailgate, Homestead on the Roof). The group will add another when Roots opens a new location in July at 744 S. Dearborn Street in South Loop. Fifty/50 took over operations at VU on March 9 and have retained most of the employees from previous management. In the future, customers will see menu changes: “In the short term, expect light renovations before the summer season fully kicks off for VU and its rooftop patio,” a statement from Fifty/50 co-owners Greg Mohr and Scott Weiner read.

Art of Dosa has launched breakfast inside Revival Food Hall

South Indian food stall Art of Dosa is now open in the mornings serving breakfast at Revival Food Hall in the Loop. Indian breakfast is seldom seen in downtown Chicago and the menu includes dosa wraps using vegan ingredients such as a mung bean scramble with black gunpowder. Customers could add Beyond beef crumble. There’s also a traditional rava dosa with sambar. Owner Ravi Nagubadi hopes to drum up morning business and introduce Chicagoans to the restaurant’s breakfast options. It’s served from 8 a.m. to 11 a.m. on weekdays.