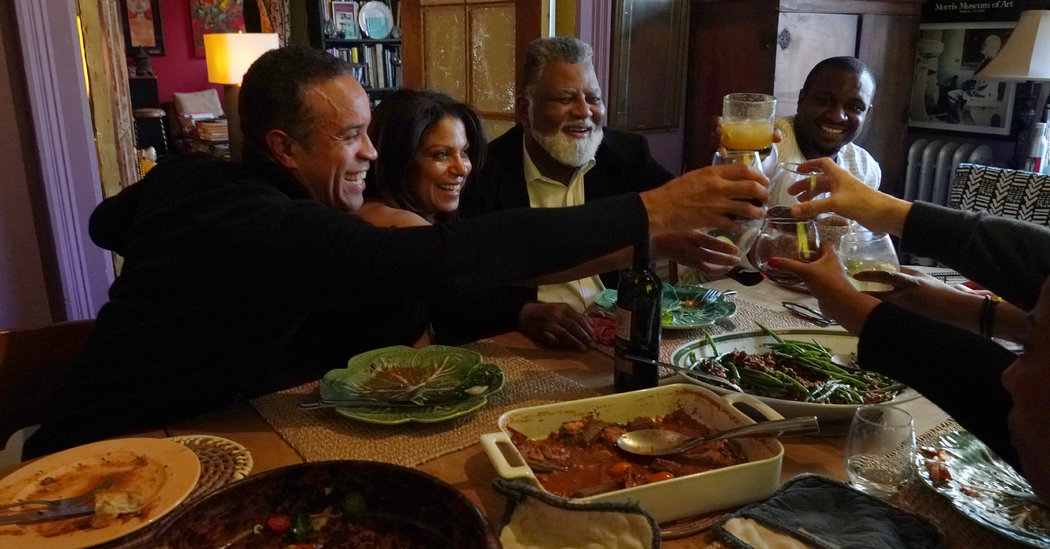 Alexander Smalls, who introduced New Yorkers to Afro-Asian-American cuisine when he opened the Cecil in 2013, has always loved Sunday. “I give myself permission to do anything and everything and nothing,” he said.

Cooking is a second act for Mr. Smalls. Before he opened Café Beulah, his first restaurant, which featured South Carolina Lowcountry fare, in 1994, he was a professional opera singer. In 1990, after starring in “Porgy and Bess” at the Houston Grand Opera, Mr. Smalls reluctantly left the stage. “An operatic career was my dream,” he said, “but I was not able to break that glass ceiling as an African-American male.”

He reinvented himself as a chef and restaurateur and cookbook author, most recently winning a James Beard Award for “Between Harlem and Heaven” in 2018. His latest offering, “Meals, Music and Muses: Recipes From My African American Kitchen,” a tribute to his South Carolina heritage and the music that inspired him, was published last month. Mr. Smalls, 67, lives in Harlem.

TEA FOR ONE I get up at 5 no matter what day it is. I don’t know why I do. It’s bizarre. But I have my ritual: The first thing I do is make a nice pot of Earl Grey tea. The tea is called Akbar, which is an odd name, but they religiously keep it in stock at one of my Sunday haunts, the Russian market. What I like in it is the bergamot. Most Earl Grey teas have a hint of bergamot, but I want it strong.

WRITE IT DOWN I have a morning of writing. Writing for me is meditation. I do a lot of fantastic riffs. Sometimes it’s motivational, sometimes it’s just the ramblings of a creative old man who has something to say. I keep tablets of my poems and things. I’m a professional, full-time dreamer. I have been all my life.

Since I was a very young child, the morning was the time I would sit with my thoughts and muse and imagine and fantasize. I was singing classical music and studying John Donne and Shakespeare and listening to recordings of Langston Hughes on the big LPs, and that started the dramatic part of my life, which continues to this day.

BEFORE ERRANDS, A SHOW I watch “CBS Sunday Morning.” It’s my most favorite show. Generally after that and my writing and having my four cups of hot tea — by the fourth one I’ve changed to jasmine green or chai — this wonderful guy who drives me, Gustavo, picks me up. We start food shopping. It just relaxes me.

DOGS In Washington Heights is Moscow on the Hudson. I buy my Russian ravioli there, and they have smoked chicken that’s double-smoked. They bring in from Chicago my favorite hot dog. I’m a hot dog freak. It’s a jumbo veal hot dog. I live for my Chicago hot dogs. So I get those and my tea and my smoked fish. Then we drive a few blocks to La Rosa Fine Foods. It’s like the Dean & DeLuca of Washington Heights. It’s teeny as can be, but they have the most amazing stuff up in there. One thing I love is the way they have this wonderful grated cabbage. It’s grated so fine. It’s perfect for my hot dog slaw.

CHINATOWN From there we hit the West Side Highway. This adventure may lead all the way down to Chinatown. Things I like to pick up in Chinatown include my duck. I’ll get one or two precooked ducks and some pork bellies. I go to a little place to buy dumplings and I get various rices, like black rice or green rice or jasmine rice or sticky rice. I go to the fish market to get fish. Sometimes I’ll stop for a quick little lunch at Nom Wah Tea Parlor in Chinatown.

ACCOUTERMENTS I’ll swing over to First Avenue to this Filipino market for spices and oils. I know it’s crazy. Sometimes they have interesting rices. Coming from the Lowcountry, there had to be a bowl of rice three times a day. My father would get up from the table if there was no rice, do you hear me?

CARRYING ON We get on the east side highway and head back uptown through Harlem. I’ll stop — like I haven’t carried on enough, but it’s an obsession — at a market for bread on 116th Street. La Marqueta it’s called. I like to give them a little bit of money. The bread is made by these women who are in a kind of bread cooperative.

When I was running Cecil’s we used to get our roti from them. That’s in Spanish Harlem. In Harlem is Little Africa. I go there because I love creating the food of the African diaspora. Also in Harlem is Lee Lee’s Baked Goods, and Mr. Lee, who does the best carrot cake in the world. I go in there and chat with him because he’s from Charleston, same as my daddy. We talk about stuff like that.

THREE FRIDGES I make my way back home. I put stuff away in my three refrigerators. It takes forever. I live alone but my friends don’t let me be lonely. I’ll have anywhere from four to 12 friends over for an early dinner. I love one-pot dishes. I love to pull out my big pot and set it in the middle of the table. One of my specialties is herbed cornbread stuffed with big chunks of Brie. I cook it in the biggest cast iron skillet you’ve ever seen. It’s divine. Folk fall in and we carry on. Sometimes it’s Maurice DuBois and his wife, or Jason Moran and his wife and their set of twins.

HEAD TO THE OFFICE If I’ve not had too much vino, I’ll read or watch a little TV. Another friend might pop by to see if there’s leftover pecan pie. Then I’ll go to bed, which is my office. I have two laptops and my iPad and my phone and my books there. Bedtime could be anytime.