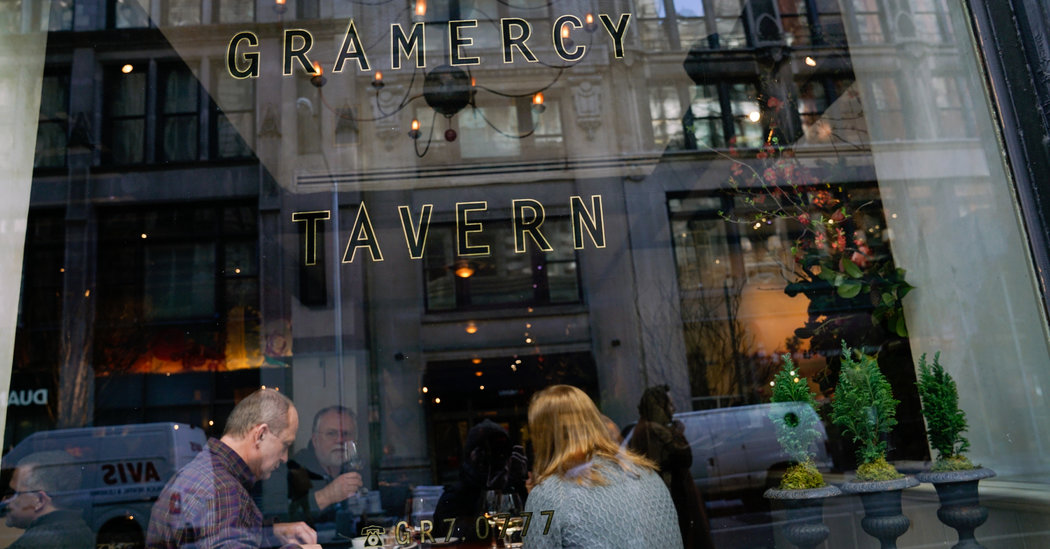 Some of New York City’s leading restaurants, including Le Bernardin and Daniel, announced Friday that they would close indefinitely after dinner that night. All 19 of the Union Square Hospitality Group’s restaurants in New York City closed after lunch on Friday and will remain closed until further notice, said Danny Meyer, the group’s founder and chief executive.

The group’s move temporarily shutters some of the city’s most popular and enduring restaurants, like Gramercy Tavern and Union Square Cafe.

“With all that we now know about federal, state and citywide mandates, as well as the science that has provided evidence urging everyone to reduce nonessential social contact, we have made the difficult, but for us, obvious decision to temporarily close our restaurants in New York City,” Mr. Meyer said in a statement. “I feel it is necessary that U.S.H.G. do our part to prevent the spread of this pandemic.”

The chef Daniel Boulud, who has restaurants around the globe, decided to indefinitely close Daniel and Café Boulud on the Upper East Side, Bar Boulud and Boulud Sud on the Upper West Side, and four other locations in New York.

“Restaurants are where people go to lift their spirits, so we tried to say open, but it has become a matter of public safety,” Mr. Boulud said. His closings, and the others, included a hiatus on all catering and events.

One of the city’s most enduring fine-dining restaurants, Gotham Bar & Grill, announced that it would close permanently after dinner on Saturday, after 36 years in business and less than a year after it hired a new chef, Victoria Blamey. The restaurant notified friends in an email that gave no reason, but said, “We now look forward to doing what we can to assist our industry and help New York City recover.” A partner, Jerome Kretchmer, and Ms. Blamey did not immediately respond to messages seeking comment.

As of Friday afternoon, the vast majority of the city’s restaurants remained open for business. They had barely begun to prepare for closings that many owners said were seeming increasingly inevitable, at least temporarily.

A day earlier, chefs were worrying about social distancing, after Gov. Andrew M. Cuomo ordered all restaurants that seated 500 customers or fewer to halve their capacity and make more space between tables. Now they are worrying about survival.

The city’s restaurants have been through emergencies before, and stayed open. Many fed first responders on Sept. 11, 2001 and ran generators after Hurricane Sandy, acting as hubs for not only food but also community news, phone charging and even showers.

“We are used to cooking our way out of crisis situations,” said Alex Raij, co-owner of four small restaurants in Brooklyn and Manhattan, including Saint Julivert Fisherie in Cobble Hill, Brooklyn. “But this is just a big unknown.”

The Union Square group said it would pay affected employees at least through the end of the current pay cycle. The company also plans to cover coronavirus-related medical costs for employees not covered by insurance, but very few restaurants are in a position to do that.

To save cash in advance of the mass closings that many see as inevitable, part-time employees have been let go, full-time employee shifts have been cut and salaried managers are working double shifts.

“I think most restaurants will not survive this,” said Shuna Lydon, the pastry chef at Worthwild, in Chelsea, who was told to stay home from work Friday. She said that if New Yorkers want their favorite places to weather this storm, they should visit them now — but that conflicting information about the health risks of dining out was making that a difficult decision.

“You don’t know if you should be scared about getting sick, or scared about the business surviving,” said Fabián von Hauske Valtierra, a chef and co-owner of Wildair and Contra in the East Village, on Thursday.

Many restaurateurs were in crisis-planning mode on Thursday when they heard that as of Friday night, the state would require them to operate at no more than 50 percent capacity for the foreseeable future.

Today, they said — with black humor — that 50 percent of normal traffic would be a gift, and planning seemed increasingly pointless.

The chef Eric Ripert said his Midtown seafood temple Le Bernardin was currently operating at a loss. He, like many peers, said this may be the point at which the national lack of support systems for restaurants will have real consequences in the future. “I have no relationship with government at any level, so there is no information,” he said.

There is no dedicated agency or point person for restaurants in city government, and few resources specifically for restaurants within the federal Small Business Administration. On Monday, Mayor Bill de Blasio promised that some interest-free loans would be available through the city’s office of Small Business Services, but did not specify how many would be made or how the decisions would be made.

“We cannot overstate how many restaurants are facing a dire future right now,” said Melissa Fleischut, chief executive of the New York State Restaurant Association, in a letter requesting tax relief, payment extensions and other forms of economic relief sent to Governor Cuomo on Thursday. Restaurateurs were taken by surprise by the mandatory capacity reductions, and a few restaurants with a capacity of more than 500 guests had to close entirely, including the banquet hall Jing Fong in Chinatown.

“New Yorkers realize what restaurants mean to them,” Ms. Raij said. “But the government doesn’t realize what an important part of the small business economy we are.”

“If I were to name one thing which we really need from the city, it is certainty,” said Carlos Suarez, an owner of the West Village restaurants Rosemary’s, Claudette and Roey’s.

And, of course, in the uncertain future they will need tax relief, no-interest loans and rent forgiveness. The vast majority of New York restaurants have no significant cash reserves or credit lines, and cannot sustain the loss of business for more than a few weeks, let alone months.

“I am concerned about the impact this will have on the whole food chain,” said Dan Kluger, the chef and co-owner of Loring Place in Greenwich Village, referring to restaurant workers, purveyors, farmers and everyone whose work touches food. “It’s scary to think about so many that will lose their livelihoods because of this.”

Food safety is here to stay in 2021-ANI – BW Businessworld

Coronavirus: no evidence that food is a source or transmission route – EFSA news