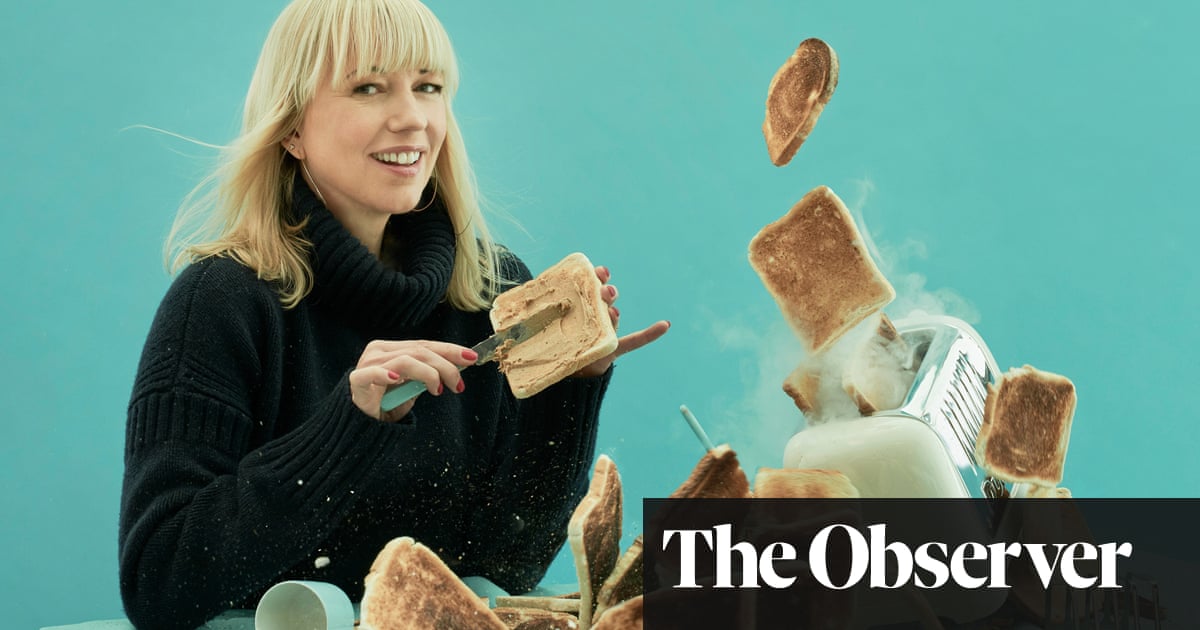 From our farm’s kitchen window you could see the coal bunker where my brothers bred rabbits and mice to sell to the pet shop. And the little shed where Dad used to do the turkeys at Christmas. He’d stand there freezing in a big white blood-splattered rubber apron and I’d take him out a brew. He’d have a big tin bucket of turkey heads, feet and innards, their eyes staring up at me.

The farm life, the space, the muck, I absolutely loved it – it was like having your own kingdom. And I loved playing in the barn.When my parents split up and I lived with my mum, who eventually ran a pub with my stepdad, I’d still go to the farm and ride my horse. Dad’s a decent vintage nowadays, but when I phone him up, he’s still out on the tractor in all weathers, because there’s no staying under his duvet when it’s tipping down outside.

I used to get taken around the fish and fruit markets in Bolton, where I lived. I was seven or eight and with my mum, who was 4ft 11, and we’d be in this battle of the matriarchs. There’d be a bustle and surge, quite chaotic and loud, with stall owners shouting: “Caulis, two for 50!” All quite overwhelming, especially in the smelly fish market. I’d be given little “crab sticks” in a polythene bag as a treat, although I don’t think any real crab would have been within 100 yards of them.

In the 80s, mum used to make a beautiful beef in red wine sauce, which I thought very exotic. And an incredible chilli con carne, with baked beans so it wasn’t too spicy for us. Later, when I asked for the recipes, she said: “I don’t know – they were Colman’s or Schwartz’s packet mixes.” It completely ruined it for me. I thought she’d hand down some secret list of herbs and spices from around the world. But she’s got a good touch, my mother – I don’t know if it’s the temperature or the salt, but I can always tell her food.

I love a jar of cockles. I love anything in vinegar – beetroot, little silverskin onions, cornichons – I’m forever grazing on stuff like that, fingers in a jar. My fondness for cockles probably came from trips to the seaside – Blackpool or Morecambe where they’d serve them in polystyrene trays with a cocktail stick.

When I was a teenager I managed to be a vegetarian for a few days but my heart wasn’t in it. My dad roasted a leg of lamb and I caved.

I moved to London when I was 21 [to be a model]and I’d go for a brunch at a cool pub on Portobello Road and hang out, have eggs benedict, a coffee and a Bloody Mary and my hangover would go in 16 minutes.

There’s not a lot of food eaten by models. I didn’t really eat. You’re surrounded by size six, size eight girls the whole time and I smoked back then so it was just lots of Marlboro Lights and slimming soups. Although I did eat some amazing food in South Korea. I was given a Korean kimchi beef dish with a lot of stringy things and glistening onions and I absolutely loved that. But we’d go off to model and stay away the night and were given a sort of fish soup for breakfast. It had tiny spider-sized crabs in it. So, often I had the fried rice with a fried egg on top.

When you eat you naturally produce saliva so when you’re presenting a radio show you don’t want to be sounding like that dribbling Spitting Image puppet of Roy Hattersley. But I might have almonds knocking around.I’ll tell you what I really love – liquorice pipes. I’ve got a box of them and I often offer them to other DJs. It’s said that too much liquorice increases hyper-tension, which I have. When I told a friend who’s a GP, she replied: “You’d have to eat a skip full to have that effect.”

For Back In Time, the series, we did Back In Time For Tea. It was set in 1910 or whatevers and I inflated a pig’s bladder for a boy to kick around and I tried tripe for the first time, which I wasn’t wild on itself, but it was in bread crumbs and deep-fried. If you put bread crumbs into a deep fried flip-flop it would taste ok.

I just got my first deep-fat fryer. I feel like I’m going back in time a bit by buying that. I’ve cooked chips in it twice so far and they were lovely. My nana used to cook chips which were soft and cooked in the middle, but still pale outside. With fried egg. And you can’t get any better than that. I think it’ll have to be my last meal – fried egg and chips. At my funeral I’d like them to play the music from the Hovis ad.

I don’t know if it’s because I’d been running around a camp site and beach all day as a kid, absolutely famished, but I ate freshly fished mackerel one day and I’ve been on a mackerel pilgrimage ever since.

Wine. I’ve got that Vivino app. It’s lethal if you like wine because if you have a nice bottle in a restaurant and take a photo of the label, when you’re in the taxi on the way homeyou end up buying a case of six.

I just think northern food is just more substantial and sturdier. So a good potato pie. With a meat pie, just in case. Or I make a veg curry or fish pie. I once did it like a cheese-board, with alternative bits of sweet potato and normal potato which looks disgusting but is a bit healthier.

Till the Cows Come Home: a Lancashire Memoir is out now in paperback (Coronet, £9.99)

Pasta: Delicious instant options that are apt for your evening snacks – Times of India