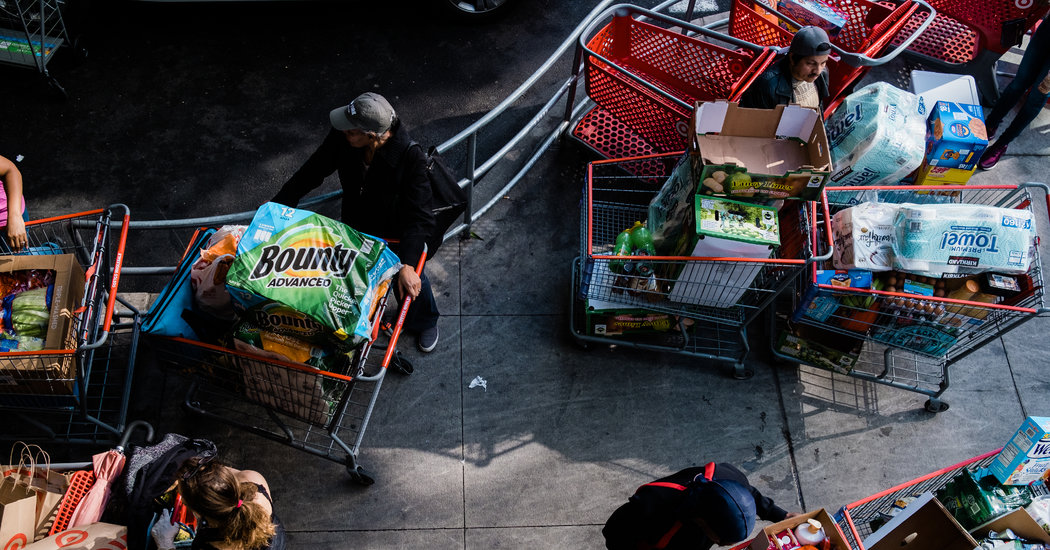 The aisles and aisles of empty store shelves give the appearance that the United States, improbably and alarmingly, is running out of food.

But the nation’s biggest retailers, dairy farmers and meat producers say that isn’t so. The food supply chain, they say, remains intact and has been ramping up to meet the unprecedented stockpiling brought on by the coronavirus pandemic.

Even so, shoppers can most likely expect to see empty shelves intermittently, as the nation’s network of food producers, distributors and retailers are stretched as never before. Industries that are calibrated to supply consumers with just enough of what they need on a given day cannot keep up with a nationwide surge of relentless shopping fueled in large part by fear.

Food suppliers and retailers are now not only struggling to satiate crushing demand for canned soup and oat milk, they are battling a perception that the scary scenes at the grocery store reflect a fundamental breakdown.

“There is food being produced. There is food in warehouses,” said Julie Anna Potts, chief executive of the North American Meat Institute, a trade group for beef, pork and turkey packers and producers. “There is plenty of food in the country.”

“Our stores are getting stocked every day,” Ron Vachris, chief operating officer of Costco, said in an interview on Saturday. “Transportation is functioning, our suppliers are working around the clock and the flow of goods is strong.”

The National Chicken Council said it was not seeing any disruptions in production and noted that there were “ample surplus supplies of chicken in cold storage” — totaling more than 950 million pounds, according to government data.

Still, the fear is palpable. The more empty shelves people see, the more panic-buying ensues, the more food is out of stock.

The panicky buying is testing the food system’s capacity in the near term. Over the past few weeks, sales of rice have increased more than 50 percent, according to data from the research firm Nielsen. Canned meat is up more than 40 percent. And sales of other essentials like beans, pasta, peanut butter and bottled water have also risen substantially, with a sharp spike this month. Kroger told its suppliers that demand had surged 30 percent across all categories in recent days. (For comparison, the company’s sales for all of last year rose about 2 percent.)

Orders for hot dogs at Walmart and Costco increased by as much as 300 percent, meat suppliers say. In response, some hot dog plants have added Saturday and Sunday shifts and have started shipping packages they were storing for Memorial Day cookouts. And hot dog makers say they have a year’s supply of spices like garlic.

Another strategy that is helping ease the strain: Some food supply is being diverted to grocery stores from the restaurants, school cafeterias and college campuses that have closed.

“The food is there. It’s just going into different spots,” said David McInerney, the chief executive of FreshDirect. “Cruise ships are not using up all of the avocados. We have a giant surge of avocados.”

Retailers say the frenzy started about two weeks ago, when customers could not find hand sanitizers and wipes, which were actually in short supply. But that set off a wave of panic buying that spread in recent days to include bread, canned goods, milk and frozen food.

These items are moving through the supply chain, but cannot reach the stores quickly enough so retailers have asked suppliers to produce more.

But even as farmers and slaughterhouses ramp up, producing food takes time. In the poultry industry, it takes 10 days for a chicken egg to incubate and hatch, and then five to six weeks for the bird to grow to maturity. For some chicken suppliers, the process takes even longer, depending on the type of bird.

Across the industry, “you’re talking about 50 days to get to a customer,” said Matthew Wadiak, who runs Cooks Venture, a chicken supplier based in Arkansas and Oklahoma. “Fifty days ago, we didn’t know this was even on the horizon. There was essentially no way to plan for it.”

Mr. Wadiak said some of Cooks Venture’s customers — like the Berkeley Bowl grocery stores in California — had quadrupled their orders in recent days.

“People are very short today. Retailers are short on products,” Mr. Wadiak said. “So we’re helping out where we can, and I know that we’re not meeting the full demand.”

It’s clear that the modern supply chain, for all its efficiency and speed, is not equipped to deal with this kind of surge.

Algorithms, perfected by Amazon, can pinpoint exactly how much inventory a warehouse or particular store must keep on hand during a typical week, right down to the soup can. But no algorithm could predict this extraordinary moment, leading to widespread out-of-stocks of hundreds of household necessities.

“When the shelf is emptied in the course of 24 hours and the safety stock was built intent upon protecting a week or two of demand, you get this tremendous dislocation,” said Mark Cohen, director of retail studies at Columbia Business School.

“The trouble is that the hoarding hasn’t abated. We’re just seeing the very beginning of this kind of behavior,” he added. “The question is: How long will it take for industry to catch up?”

If the illnesses surge, of course, there could be a slowdown in production and distribution, food industry official say. But the extent of any problems could vary across the food chain. Slaughterhouse workers tend to work side by side, possibly making them at a higher risk of spreading the virus. But many dairy farmers operate in sparsely populated rural areas, improving their chances of staying healthy.

Still, industries are starting to make contingency plans in case large numbers of workers producing and delivering food are incapacitated by the virus or roads are shut down as part of the effort to control the pandemic. Representatives for companies that deliver food in refrigerated trucks, for example, are working with local and state officials to make sure they can still make deliveries during quarantines. Some refrigerated warehouse workers could rotate in 14 day shifts to make sure there is backup.

On Friday, officials from every part of the food chain — from fresh produce suppliers to refrigerated warehouses — met outside Washington, D.C., to discuss responses to the pandemic, including ideas for how to bolster parts of the system against disruptions.

For now, the most pressing issue is getting more food on the shelves, while the supply chain is largely unaffected by illness.

“Will there potentially be some hiccups, and might you go to the store and not see everything every time?” said Lowell Randel, vice president for government and legal affairs at the Global Cold Chain Alliance, a trade group representing the refrigerated warehouse and delivery industry. “Yeah. But that’s a short-term disruption and not an indicator that the overall supply chain is not functioning.”

As this cycle continues, however, there is less chance suppliers can catch up with demand, stressing retail workers, who are already vulnerable to contracting the virus because of their constant interaction with the public.

Starting on Monday, the grocery chain Stop & Shop will reduce its hours in stores to give employees more time to restock shelves, but also to allow the workers to get more rest and stay healthy, a spokeswoman said.

Many Walmart stores will also no longer be open all night. The company said it was reducing hours at its stores, starting Sunday, to “help ensure associates are able to stock the products our customers are looking for and to perform cleaning and sanitizing.”

Even if these efforts help slow down the current frenzy, retailers are expecting that the panic buying could come in waves, as the illnesses spike.

“Shopping for food is something that makes you feel in control,” said Blake Waltrip, chief executive of the a2 Milk Company’s United States operations, which has increased production in recent days. “Even when everything else feels totally out of control.”

Panera is adding pizza to the menu, as chains like Domino’s and Papa John’s sales explode during the pandemic – Business Insider India

Would you try this flourless mug cake? – The Indian Express