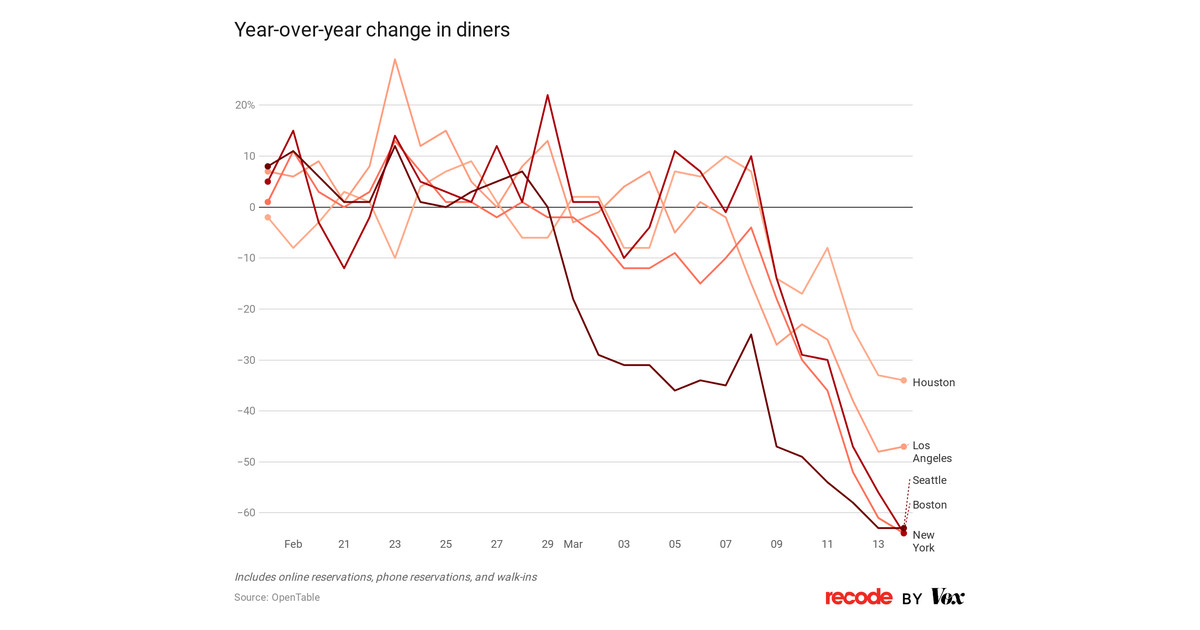 In addition to its severe cost to human life, the novel coronavirus has wreaked havoc on a number of industries including airlines, cruises, and conferences. As people and governments and public health experts stress the importance of social distancing as a way to stem the spread of the contagion, restaurants are seeing major declines in patronage. Meanwhile, newly announced city-wide closures of restaurants stand to make the trend more severe.

We used data from restaurant reservation system OpenTable to look at the year-over-year change in restaurant diner numbers on three consecutive Saturdays in February and March. You can see in the chart below the abrupt change in the number of seated diners. In New York City and Boston, patronage was down 64 percent on Saturday, March 14, compared with the same night a year earlier. Indeed, every major city appears to have felt a severe drop:

On Sunday, governments in Los Angeles, Chicago, Boston, New York, and Washington state officially announced bars and restaurants would be closed to sit-down diners and limited to takeout orders and delivery. When new data becomes available, the declines will likely look even worse. Other cities, such as Washington, DC, have placed restrictions on bars and restaurants. Among the various restrictions are mandates asking that these places only fill to half capacity or that tables and booths be separated by at least six feet so that diners are not too tightly packed. Many restaurants had already closed on their own accord, before these measures.

Here’s what the decline in patronage looks like for a select few large cities over a longer period of time:

It remains to be seen how allowing takeout or delivery could help mitigate sales losses for restaurants in cities with restrictions.

More than 5 million people work in foodservice or related jobs in the US, and the foodservice industry is under particular strain from these closures, as many of its employees don’t have paid sick leave or other ways to compensate them for declining business.

After facing criticism, Darden, the parent company behind restaurant chains like Olive Garden, recently instated a sick leave for its workers. There are still growing concerns that many smaller, independently owned bars and restaurants might not be able to do so.

When it released its data set, OpenTable provided some advice to diners — albeit advice that could benefit its business. “Please support your local restaurants during this turbulent time, as they are a vital part of our communities. Many operate on thin margins and fear staff layoffs and shut downs,” the company said. “Home delivery through the OpenTable app is a good alternative to dining out. Another option is to buy restaurant gift cards for future use.”

Other industries like travel and retail will have to find their own solutions for dealing with loss of business from coronavirus. The timeline for dealing with the pandemic, including through social distancing, remains unclear, and it could be years before we comprehend the long-term economic impact of this crisis.