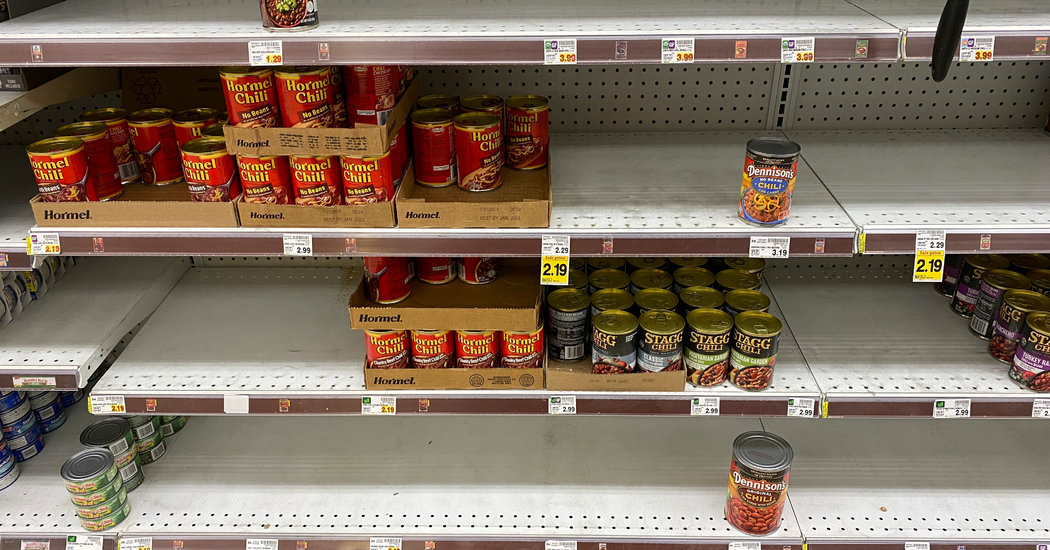 The white-tablecloth restaurants and the dive bars are closed. The ample buffets that feed America’s tech work force and Las Vegas gamblers have been shut down, along with millions of school cafeterias. On Monday, McDonald’s joined other fast-food companies and closed its restaurants except for delivery and drive-through.

Almost overnight, Americans have had to rethink one of the most elemental parts of their daily lives: food.

It’s painful but not impossible to forgo some pleasures, routines and duties for now: playing a soccer game, going to a movie, visiting a sick friend. But eating is a cultural ritual that is also a necessity.

Mealtimes arrive three times a day. How do you feed yourself and your family when restaurants are shuttered and store shelves emptying? And how do you take care of a community in crisis when caregiving meals like Sabbath suppers, pancake breakfasts, casseroles for new parents and funeral food are off limits?

Catherine Powell, 58, a lawyer in Crested Butte, Colo., is like millions of other people who suddenly have to figure out how, and what, to cook in the age of the coronavirus.

She sat in her car outside a grocery store on Sunday, struggling to pull up recipes her husband had sent to her phone. “I’m a recipe follower,” she said, not a practiced cook who can whip up a meal from a random assortment of pantry ingredients.

In the end, it didn’t matter that she couldn’t download the recipes. The store was out of pasta and canned vegetables. There was no chicken, but plenty of pork, which she doesn’t eat.

“I don’t know if I’m going to be able to become a different kind of cook,” she said. “But I’m going to have to try.”

All at once, it seems, many Americans are scrambling to learn how to cook. A week ago, Google searches for cooking videos hit Thanksgiving-level highs, and traffic to cooking websites is skyrocketing.

Cooking teachers and chefs who don’t have kitchens to run are offering tips on social media for cooking from pantry ingredients and making dishes that can be stretched into several meals. Families and friends are teaching one another to bake sourdough and cook beans on FaceTime and Zoom.

“If I’m having to think about this, and I am a culinary professional who can basically make dinner out of a jar of mustard, then what does that mean for the normal person?” said Virginia Willis, 53, a cooking teacher and author in Atlanta.

Get an informed guide to the global outbreak with our daily coronavirus
newsletter.

At the same time, a world where everyone is forced to eat at home has turbocharged the nation’s already competitive online delivery services. GrubHub has been adding restaurants to its platforms at a daily rate that’s three times its previous peak, Matt Maloney, the founder and chief executive, said Tuesday.

As countries like Italy and Spain were shutting down restaurants completely, Mr. Maloney said his company — which includes Seamless and Yelp delivery services, and has the largest network of restaurant clients in the country — had lobbied state and local officials to allow restaurants to keep their kitchens open for takeout and delivery, even as dining rooms are closed. (The company also announced that payments from the restaurants — anywhere from 15 to 30 percent of each order — will be deferred but not reduced, which angered many restaurateurs.)

In the Bay Area, where six counties went into lockdown on Tuesday, restaurant deliveries have been deemed an essential service that can continue — for now.

The California restaurateur Alice Waters was sequestered in her Berkeley home on Monday while Chez Panisse, the restaurant she opened in 1971, pivoted to selling boxes of produce from farmers and preparing to offer complete meals of hearth-cooked beans, greens and cornbread for online ordering.

K.C. Hysmith, 30, a doctoral candidate at the University of North Carolina studying food history, said her family was trying to order from local restaurants as much as possible.

During World War II, Americans tended victory gardens, needing both fresh food and a sense of participating in a national cause. In the last few days, Ms. Hysmith said, a similar urge has set in: Diners are using apps to order from favorite local restaurants in an effort to save them, knowing that places without financial safety nets may never reopen.

“We ordered Chinese takeout last night, knowing they could shutter at any moment,” she said. “It’s almost as if our victory gardens are how we are using our digital expertise to feed ourselves and help others.”

But delivery is expensive. It’s not readily available in many parts of the country, and even those averse to cooking can’t rely on it forever.

Dan Nguyen, 34, a data scientist with Airbnb in San Francisco, hasn’t cooked since he began working in the tech industry five years ago. He would eat two meals a day, and occasionally dinner, at work. Anything else was delivered to his apartment in the Mission district.

“When you get three meals a day, you just stop cooking altogether,” Mr. Nguyen said. He plans to transition back into cooking at least some of his own food, while also relying on deliveries — for as long as they remain available.

The return to the kitchen has underscored the differences among America’s cooks. City dwellers with small kitchens who are used to regular shopping at a weekly farmers’ market or who cook only when the urge to make an interesting new recipe strikes have vastly different skills than Americans used to cooking from a large pantry that is kept stocked with monthly runs to a big-box store.

Hi‘ilei Hobart, 38, an assistant professor of anthropology at the University of Texas, pointed out that many Americans, especially in rural communities, already know how to stock and cook every day from a pantry of shelf-stable ingredients.

“They have knowledge that a lot more people had in the early 20th century,” she said. “That’s not to say modern urban dwellers are dumb, but they have a different knowledge set and skill set that is appropriate for their everyday lives.”

In Weatherford, Okla., a college town of about 15,000, people are used to driving a half-hour or more to a grocery store and stocking up for a week or two. So far, the shelves haven’t been stripped. And there are other sources of food.

“A lot of people here slaughter a beef, and a lot of people have a ton of meat in their freezer,” said Garrett King, 34, who was home from his job at Southwest Oklahoma State University, helping tend his two preschool-age children. “There is no one in rural Oklahoma that doesn’t have more than one freezer.”

Still, concern about provisions is setting in, particularly among the many there who farm for a living and know that any disruption in government certifications or inspections for grain or cattle could mean empty store shelves later on.

Even in communities where preserving and storing food is already a habit, life under social distancing is proving a challenge.

Christy Spackman, 42, of Tempe, Ariz., grew up in Utah, and remains deeply involved with the Church of Jesus Christ of Latter-day Saints, which recommends that members stock a year’s worth of food. She and her friends have joked about the boxes of bulk ingredients that Mormon brides receive, wondering if large cans of powdered milk, dried apples and pinto beans can be used as home décor.

Suddenly, the jokes don’t seem so funny anymore. The reality of what not sharing food can mean to communities connected by food rituals is starting to sink in.

Her grandfather’s funeral will be held in Idaho on Wednesday. The community of Mormon women who regularly provide food for funerals said it will be the last one they will service until the threat from the coronavirus is over.

“It’s shocking in a way to realize this thing that is so central to how we communicate is dangerous,” said Dr. Spackman, a professor at the School for the Future of Innovation in Society at Arizona State University. “You say to yourself, even though I trust this sisterhood of believers, how do I trust that they are not a carrier?”

Cooking may provide a sense of control, but today even the first step — shopping for ingredients — can seem risky.

Rather than visit stores, many who can afford it are using shopping services like Postmates and Instacart. Grocery delivery services and restaurants offering takeout and delivery have told consumers that extra sanitation practices have been put in place. (Federal health officials say the virus is spread mainly through respiratory droplets and to a lesser degree by touching surfaces that might hold it. There is no evidence, according to the Centers for Disease Control, that the virus has been transmitted through food.)

Safety aside, a trip to the grocery store can be a somber exercise. At the Whole Foods Market in Glendale, Calif., all of the chicken — from breasts to wings to thighs — had been snatched up before noon on Monday. Workers hustled carts through half-empty aisles, trying to meet a surge in delivery orders.

Valerie Aguilar, 19, a student at California State University-Northridge who works as a part-time shopper at Whole Foods, looked at a new order on her phone and shook her head. “There’s no more Cheerios,” she said grimly. “No more beans, no more spaghetti.”

When selection is limited and many people can’t go shopping, even the most adept cook can be challenged. And when you get the groceries home, the joy of preparing food for yourself and others can be fraught, especially if family members have special dietary requirements or eating schedules.

Tina Gupta Patel, 51, lives in Nashville with her husband and two children, one in high school and the other in college. Both are home now, and everyone seems to eat on a different timetable.

“It has been really tough to corral everyone and say, ‘Let’s sit down and eat family dinner the way we used to,’ ” she said. So she makes dishes like pot roast that can be eaten as is or shredded into tortillas throughout the day, and pushes the fruit and vegetables, which so far are in abundant supply at the local supermarket.

Unlike some cooks who are embracing the time to cook at home, preparing food is not cathartic or pleasurable for her at the moment. “It takes energy for me to want to cook, and I don’t have a lot of energy right now.”

Even those eager to turn to the kitchen as balm and social connection are stymied.

“It’s a super-strange time,” said Ms. Powell, the lawyer in Colorado. “In our community we often take meals to other people or drop off dinner for our friends. We have some friends who have babies right now. But I don’t want to freak people out with a COVID Stroganoff.”