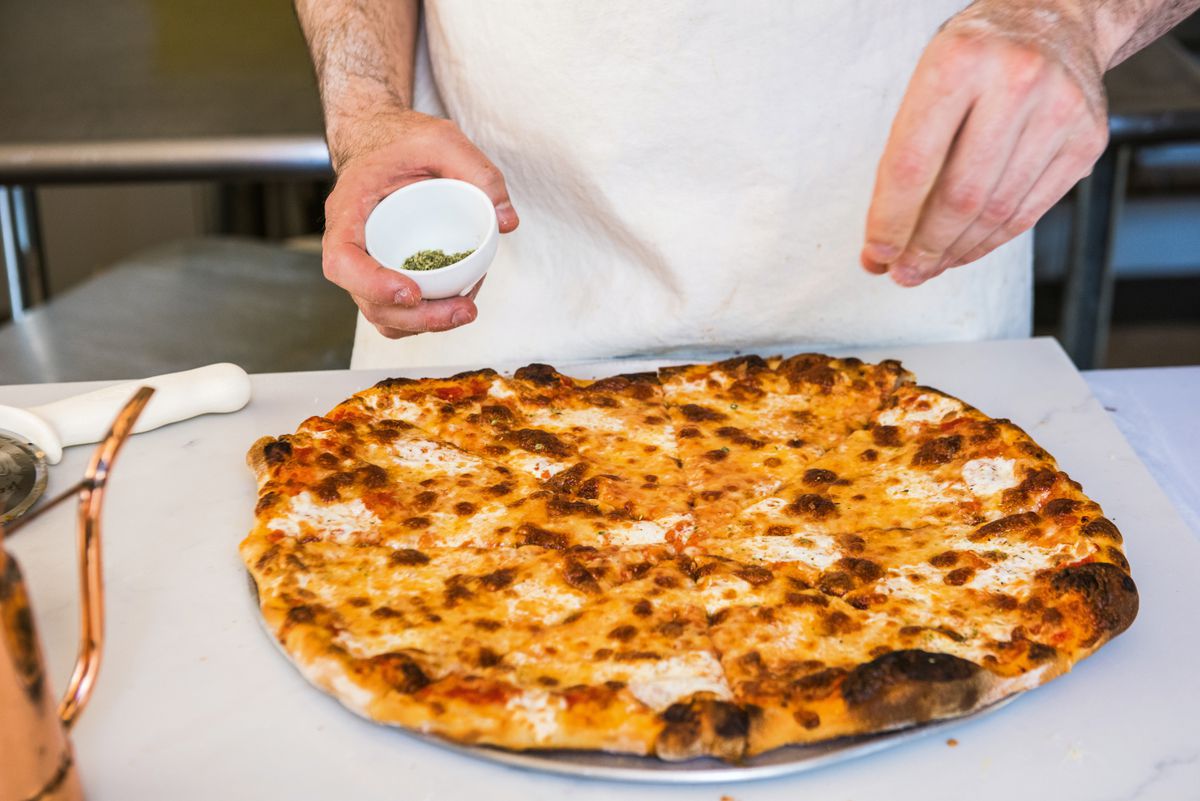 Whisk the water with the sugar and yeast in a large stainless-steel bowl. Mix in the olive oil. Then mix in the flour with a large, strong spoon, your hands, or a stand mixer with a dough hook attachment. Mix for about 5 minutes on slow speed, until everything is just incorporated. After everything is mixed and there aren’t any dry parts, scrape any remaining dough down the sides and cover the bowl with plastic wrap. Let it rest for 30 minutes.

Next, knead the salt into the dough until the dough is smooth and salt is fully incorporated, using wet hands (this makes handling it easier) or a dough scraper. Gently fold the dough over onto itself. One the salt is incorporated, cover the bowl with plastic wrap and put it in the fridge for 24 hours for a slow, long fermentation.

After the dough has chilled for 24 hours, take it out of the fridge and scrape it out onto a well-floured, clean counter. Shape the entire thing into one big ball. With well-floured hands, grab either end of the dough mass and pull them up to meet the middle. Rotate the dough one quarter turn and repeat, incorporating the dough into itself to form one smooth, round, floured ball. Flip the whole thing over, then, using a knife or bench scraper, cut the dough in half.

With well-floured hands, take one half of the dough and fold it over on itself, essentially repeating the same shaping technique with each half until you have a rounds, smooth-surfaced ball. Set it on a floured surface and let it sit, covered with a kitchen towel, until it doubles in size. It should take approximately three to four hours. It should feel smooth at this point, and it should rise back slowly when you press it with your finger, and is ready to use. At this point, you can also put the dough back in the fridge in a sealed container for up to 24 hours.

Dump the crushed tomatoes into a nonreactive container, just large enough to store them. Trim off any hard parts of the garlic; if there are green sprouts leave them in. Push the garlic through a garlic press directly onto the tomatoes. Add the salt and olive oil and mix thoroughly. Let it sit in the refrigerator for a few hours before using. It can be covered tightly and stored in the refrigerator for up to one week.

To make and bake

Place a pizza stone on the lowest shelf of your oven, then turn oven to its highest temperature. Most ovens go to 500°F. Heat your stone for at least one hour before baking. While oven is heating, focus on the dough. If stored in the fridge, give it about 15 minutes to warm up a bit. Next, set up your “pizza station.” Get your utensils ready: sauce ladle, dough scraper and pizza cutter. Prepare the additional toppings of your choice. You’ll also need a medium to large bowl with a couple cups of flour in it to act as a dunk tank for your dough and for flouring your work space. You’ll also want a cup with a few ounces of semolina flour for dusting your pizza peel.

Lightly flour your counter and your hands. Lift the dough from its surface and flip into the four bowl so the top side of the dough ball gets dusted first. Flip once more, completely coating the dough, then place it on the floured countertop. Pressing your fingers firmly into the dough, start by flattening the center and work your way out toward the edge to make it wider, until it’s about 7-9 inches wide. Pushing down on the dough will release some of the gas and actually begin opening up the dough. Be careful not to disturb the outermost lip. This will eventually become your crust.

The next step is tricky. Your goal is to stretch this disc of dough to about 14-16 inches without tearing it. I pick it up with floured hands and begin to gently stretch it over my fists, letting gravity do most of the work. Once you’ve stretched it enough, put the dough back on the counter, making sure there is a generous dusting of flour underneath. Take a few generous pinches of semolina flour and dust your pizza peel. Lift and transfer your dough to the peel. When dressing pizzas, do not leave the dough on the peel for longer than five minutes, or it may stick. To dress the pie, take approximately 3/4 cup (180 ml) of sauce and spread it over the dough, all the way to the edges. Add your fresh mozzarella, adding little clumps evenly all over the pizza. Be careful not to crowd the middle. Add a generous covering of shredded low-moisture mozzarella.

With a firm and steady hand, take the peel and insert it into the oven at a slight downward angle, touching the tip of the peel to the back edge of the stone. This takes practice. Give the peel a short jerk forward so that the dough begins to slide off the peel. Once you have the front end of the dough safely on the stone, gently pull the peel out and close the oven. Let it go for 4 minutes. The crust will rise significantly. Then change the oven setting from bake to broil, cooking the pizza until the crust begins to blister. It should take up to 10 minutes total for the pizzas to be well done. Just keep checking so you don’t burn it. It may blacken in spots, and that’s okay. When pizza is finished, slide your peel underneath quickly so the pizza is sitting directly on top of the peel. Take it out of oven and place on the cutting board. Drizzle the pie with olive oil, grate your hard cheese over top, finish with a pinch of oregano and serve. — Adapted from Pizza Camp by Joe Beddia