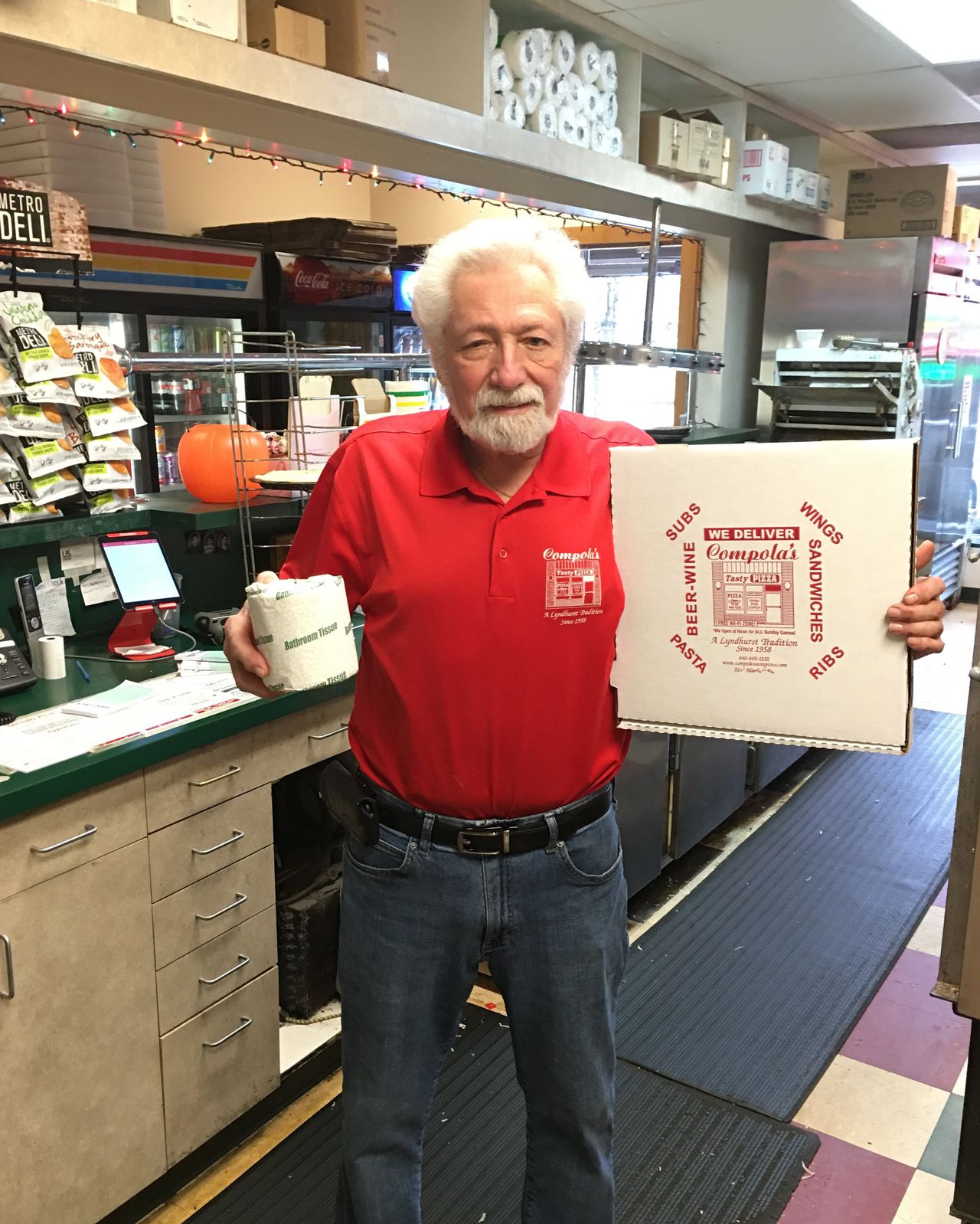 LYNDHURST, Ohio — It’s been well reported that as people have been advised to self-quarantine to help stop the spread of the caronavirus, finding a roll of toilet paper on a store shelf is akin to winning the lottery.

One local business is helping its customers win that toilet paper lottery. Compola’s Tasty Pizza, 5101 Mayfield Road, is offering a free roll of toilet paper with the purchase of one extra large pizza. But, that’s not all. Owner Joe Woytovich will also throw in one free large, plain pizza. If customers want to add toppings to that plain pizza, they’ll pay only for the toppings.

“What an ingenious idea,” said Lyndhurst resident and longtime Tasty Pizza customer Mark Dottore of the toilet paper giveaway. “What a great place and what a great innovation.

“I was in the store and bought a pizza and I already had toilet paper, so I gave mine to a lady who just got one (with an extra large pizza purchase) because she was so excited by getting the roll she got,” added Dottore, who is 61 and said he has been a Tasty Pizza customer since he was 15 and living in Cleveland Heights.

“I wanted to do something to help my customers out,” Woytovich explained when asked about the special. “So many of them have been with us a long time. Some of them have been laid off (because of coronavirus’ effects on the economy), and I wanted to help them out since they’ve been so good to us.”

Compola’s Tasty Pizza has been in business since 1958, founded by the late Joe Compola, the father of Woytovich’s wife, Jackie. Over the past 62 years, generations of families have made Tasty Pizza their go-to pizza shop.

Wotovich put his promotion into action March 17, and said the response has been great.

“I started with 96 (rolls) and I’m down to seven,” he said on Thursday evening (March 19). “I’m expecting to get another shipment and, hopefully it will come on time because I’m expecting that we’re going to have a busy weekend.”

How does a pizza shop owner have access to something that’s harder to find in public than a blue-eyed ground dove?

“When I buy my pizza boxes for takeouts, the people I buy from sell other paper products,” Woytovich said. “So I order from them.

“People are loving it,” he said. “I gave a roll to one customer and she said, ‘It’s the greatest gift I’ve ever got.’ The way things are going these days, it’s nice to see people smile. And, we’re giving them something they’re going to use.”

Earlier this week, Gov. Mike DeWine closed sit-down restaurants, leaving carryout as the only option for those wanting to order food.

Becasue Woytovich can no longer serve customers at tables inside Tasty Pizza, he said he has seen sales of beer, wine and salads go down. The workers who served and cleaned tables aren’t now needed, but he said those employees will be put to work on weekends, when things get busier and when he expects to sell more salads with to-go orders. As for business in general, Woytovich said he has been quite busy keeping up with the demand for takeout pizza.

Woytovich isn’t stopping with the toilet paper-extra-pizza offer. Tasty Pizza also has a buy-one-get-one-free deal on its homestyle carryout pasta dinners. Available are spaghetti, rigatoni and cavatelli dinners, each with salad and roll, for $10.99 per dinner.

As for the toilet paper offer, Woytovich said, “I just wanted to give people something they can’t get and that I could — and to put a smile on their faces.”