First she was a competitor, then a defending champion of Diamond Chef Arkansas. After judging the competition last year, Mary Beth Ringgold is co-chairing this year’s Diamond Chef with Lorri Hambuchen.

Originally slated for April 23, the popular, fast-paced fundraiser for University of Arkansas Pulaski Technical College was recently rescheduled to Oct. 15.

Vying for the 2020 title along with Davis will be Bonner Cameron, Matias de Matthaeis, Joseph Salgueiro, Brian Townley, David Utley and Geovanney Villagran.

Ringgold is the only woman to win the event and was surprised when Todd Gold, associate dean of the Department of Culinary Arts and Hospitality, asked her to participate. Ringgold owns Little Rock restaurant Capers.

“What I do for a living is push paper,” she explains about her hesitation.

“But, I am soup to nuts,” she says, explaining that having worked as a restaurant manager for years, she’s had to know every part of the operation from doing the dishes to preparing the food. However, she didn’t think she’d be fast like the other competitors.

“And he [Todd Gold] said, ‘No, you’re gonna be great’,” she says. “I just have a hard time saying no to people — my No. 1 worst problem. I figured he needs either diversity or he needs some comic relief.”

She did consider that since she also did catering she might be able to adapt. “You really do adapt to be very fast on your feet and in thinking because you are off site,” she said. “And you don’t have all your own accouterments. You just have what you have, and you make it work.”

So she said, “I’m gonna do it, and hopefully it will not be an embarrassment to my team.”

Each year, for the competition, the chefs are presented with a surprise ingredient and that year it was live freshwater bass which they had to scoop out of the tank and process.

The winning dish was freshwater bass served over wild mushrooms and spinach and roasted vegetable couscous, on a leaf of swiss chard and garnished with crispy sweet potato spirals and a shaving of fresh truffle.

The next year, she defended her title, and the secret ingredient was revealed as live rabbits in a cage. Of course, her family was there to support her. “I’m looking at the judges like, are you kidding me? My granddaughter had just bought a new rabbit, his name was Midnight and had a bunny hutch and all this and I thought this is going to be a disaster.” But it turns out the live rabbits were just for drama. The chefs did not have to deal with the live rabbits but were given rabbits that were already dressed.

For her winning dish, Ringgold presented to the judges “a leg of rabbit, pan seared and finished in a hot oven, served on parmesan flan with a bit of truffle oil, topped with a sauteed spinach and wild mushroom ragout. Rounding out the dish was fresh basil and thyme goat cheese-filled zucchini and squash medallions finished with a blackberry-brandy reduction.

As a back-to-back, two-time winner, Ringgold was retired as a competitor and moved to the Chef Hall of Fame. So the next year, she served as a judge.

Chefs in the competition are judged on a point system. “Some of it is walking around and watching how they keep their area clean and sanitized, so that’s a piece of the puzzle, and you watch technique a little bit, but primarily, you want to make sure it’s a balanced plate. I think one of the mistakes people make is just too much stuff, too many things together. So I was looking for clarity.”

“You can just overthink something,” she explains. “So you’re primarily wanting just the true essence of putting a beautiful meal together and things should work together well.”

Now, helping to oversee the event with co-chair Lorri Hambuchen, who writes the wine column Uncorked for the Arkansas Democrat-Gazette, she has different responsibilities.

“We want to get the word out about what a great event it is and how much good the school does,” she says. “That, for me, is a primary thing, just letting people know, hey, this is a great school. Everybody that I’ve worked with over there has just been fantastic, totally committed to it.”

Another thing the co-chairwomen are doing is getting sponsors. “We want to get corporations that are not just on the periphery of the food business, but just anybody who understands we have to raise a workforce. Let’s treat them well and let’s help them. Some of this money goes toward scholarships. It goes into a variety of different things, but let’s build it up and make a powerful event that raises money for the school, the whole school.”

In addition to the chef competition, the event includes heavy hors d’oeuvres, specialty cocktails, live and silent auctions, and a variety of activities for guests. Tickets are $150. For more information visit www.uaptc.edu/diamondchef or contact Adora Curry at (501) 812-2771 or [email protected] 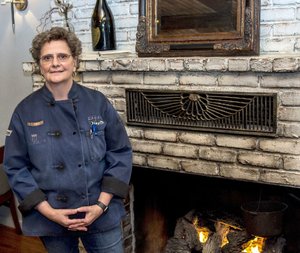 “When you work in food every day, you develop a love for food and food trends. And then you travel and you try different things and you just try to always up your game,” says Mary Beth Ringgold, former Diamond Chef Arkansas winner who is now serving as co-chairwoman of the event.
(Arkansas Democrat-Gazette/Cary Jenkins)

A bakery in Rock Falls is making a different kind of pie – WHBF – OurQuadCities.com