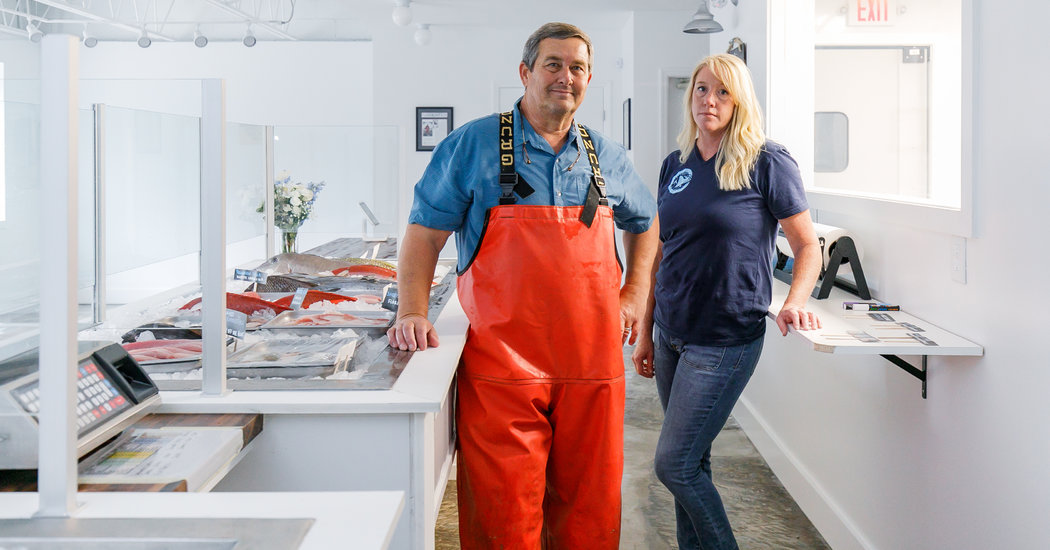 Mark and Kerry Marhefka were feeling optimistic about the future of their 15-year-old business, Abundant Seafood, when they opened their first processing plant this month in North Charleston, S.C.

Mr. Marhefka catches vermilion snapper, triggerfish, banded runnerfish and several kinds of grouper on two-hook lines he drops into the Atlantic from the side of his 39-foot boat. He and his wife, Kerry, sell those fish directly to some of the most acclaimed restaurants in the Southeast — Husk, Fig and the Ordinary in Charleston, for instance, and the Grey in Savannah, Ga.

The fish are sold whole. This has held back their company’s growth because few restaurants have a cook who knows how to clean and cut fish. The new plant, built with money the Marhefkas had put aside over the years, was going to change that. They hired eight people to carve fillets, clean whole fish that could go straight on the grill, pack seafood orders or to work in a small retail shop out front. Their first day was March 15.

Two days later, Gov. Henry McMaster shut down all restaurants and bars in the state except for takeout and delivery. Orders from restaurants, normally 80 percent of the Marhefkas’ sales, stopped almost entirely.

“There are some restaurants trying the takeaway thing, so they are buying a little,” Ms. Marhefka said Friday. “We had two orders go out to restaurants this morning. I would never think there would be a time when I would be excited about two orders.”

As dining rooms in 15 states and some individual counties and cities have gone dark, the first to feel the impact were restaurant employees and owners. In a letter to the president and congressional leaders asking for financial and tax relief, the National Restaurant Association said it expected five to seven million restaurant jobs would be lost because of the coronavirus pandemic.

But the pain is also radiating out to the thousands of small companies across the country that, like Abundant Seafood, rely on restaurants for most or all of their sales. The size of this indirect economy is unknown, but independent restaurants can spend anywhere from just under 20 percent to more than 30 percent of their revenue on food, alcohol and other goods.

Some businesses that serve restaurants have already laid off workers, driving a nationwide surge in new unemployment claims that labor experts predict will total between 1 million and 2.25 million for last week alone. Others are scrambling and improvising, trying to convert wholesale businesses into retail shops overnight.

A few have closed for now, wondering how long it will be before it is safe again for people to eat and drink together. As local and federal governments debate measures to help the economy, they are watching to see when relief will come, what form it might take and whether any of it will reach them.

Orwashers Bakery, one of the handful of independently owned bakeries in New York City that sells fresh bread to restaurants, has already laid off 20 of its 110 employees. Wholesale revenue, most of it from restaurants and the distributors that supply them, “was the economic engine of the whole company,” Keith Cohen, the owner, said. Since early March, he said, “it has been in a progressive downward spiral.”

In any other week, Orwashers would have been making daily deliveries of its tender but sturdy hamburger buns to restaurants like Upland, Superiority Burger and the Dutch. Its Rustica and Campagna loaves, familiar by sight if not by name to many New Yorkers, would have been waiting at restaurant doors in the morning.

A few fast-casual lunch spots, including By Chloe, Chopt and Fresh&co, are still serving some Orwashers bread to their pickup and delivery customers. Many of their locations, though, cater heavily to office workers who have now been ordered to stay at home.

For many vendors, the closings could not have come at a worse time of year. January and February are two of the slowest months for eating out. New spending lags, and old invoices aren’t paid even at the end of the 30-day terms that most restaurants demand.

“It’s the nature of the beast,” Mr. Cohen said. “So as a small wholesaler, you get killed.”

Outside the wholesale business, Orwashers sells bread at local farmers’ markets and in stores, including two of its own. Mr. Cohen is throwing all his energy into retail now, like many others who deal in edible products.

So is Jason Salvo, who grows vegetables on 15 acres of Snoqualmie River Valley farmland east of Seattle, in Duvall, Wash.

Last year about 100 Seattle restaurants bought produce from his farm, Local Roots. With almost all them closed for now, the arugula, radishes, spinach and other plants that he seeded in the ground on Sunday will probably end up in the boxes he sends out each week to summer members of his C.S.A. (for community supported agriculture). Already he is overwhelmed by subscription requests from people who are cooking more than they ever have before.

On a far larger scale, wholesale vendors at Eastern Market in Detroit are storing case after case of unsold vegetables. They are fresh now, but won’t stay that way for long. Daniel S. Carmody, the president of the nonprofit group that runs the market, said that one vendor held a total produce inventory at the end of last week worth $850,000, which was almost the same as at the start of the week. Another is sitting on 20,000 pounds of broccoli.

On Tuesday, the market held a drive-through sale, which Mr. Carmody called “the first of a set of experiments to make it easier to get food without human contact.” Retail shoppers could select cases of produce from a form. Boxes filled with 20 pounds of avocados, two dozen heads of lettuce, 50 pounds of potatoes, among other things, were loaded into car trunks and payments were taken by a mobile credit-card-processing unit.

“Part of the challenge is how to get the supply where it’s needed, because it’s shifted so dramatically,” he said.

Harry Root, a wine distributor in South Carolina and Alabama, usually makes about 60 percent of his sales to restaurants, but said he has begun getting exploratory calls from large supermarkets that have never done business with him before.

The wines he champions tend to be made by small producers. About half are shipped from France and Italy. Almost none have any marketing presence in the United States. They are wines, in other words, that don’t move unless a sommelier pushes them. But they may start moving now that restaurant drinking is prohibited.

The standard supermarket wine section in those states, Mr. Root said, “will have 1,500 wines and six of them are from France. Not a great ratio. But people obviously drink French wine because we sell a lot of it. If you’ve got people coming into your grocery asking, ‘Where’s the French wine?’, you’ve got to call the guy that has the French wine.”

A week ago, the Brooklyn seafood wholesaler Pierless Fish began making home deliveries of Ora King salmon from New Zealand, wild halibut from Nova Scotia and other fish that had been mainstays on local menus. Robert DeMasco, the owner, said he knew his business was in trouble even before the bans on public dining, when Danny Meyer and other veteran restaurateurs closed their establishments voluntarily.

“I honestly felt like I’d been kicked off a cliff by a donkey,” he said.

Many East Coast fishing boats stayed at the docks last week, Mr. DeMasco said, because distributors like him had nowhere to sell the fish. If he and other wholesalers successfully become retailers, he said, fishing crews will get back on the ocean again. “There’s only so much chicken you can eat,” he said.

But retail business may be out of reach for vendors that provide highly tailored services to restaurants, like linen services and florists.

“Now that there’s a shelter-in-place, we were going to put something on social media,” said Heather Shouse, whose company, Bottle & Branch, designs and installs flower arrangements, planter boxes and outdoor landscaping for hotels and restaurants in downtown Chicago and the West Loop.

As she fielded the phone calls and emails canceling orders that equaled 95 percent of her business, she imagined the sales pitches she could make to people now working from home.

“ ‘Treat yourself to flowers,’ ‘White glove delivery,’ where it just gets dropped on your front step,” she said. “Or plant delivery: ‘Turn your brown thumb into a green thumb.’ ”

Almost as soon as that hope occurred to her, it collapsed. “No one is going to want these things in this time,” Ms. Shouse said.

In any another year, Bottle & Branch would have hired 10 or so seasonal workers last week to get ready for “patio season.” Instead she laid off all 10 year-round employees. She said that Chicago’s two wholesale flower markets, where the salespeople work on commission, had been brought to a virtual standstill when the restaurant trade died.

“We went from spending $4,000 a week with one salesperson to nothing,” she said, “so that’s food right out of his mouth.”

Certain restaurant vendors are as busy as ever this month, not that they’re happy about the circumstances.

Most chefs and restaurateurs ask him about the same few issues. “The number one concern is, can I take care of my people?” Mr. Hanley said. “And unfortunately, the answer is, no, you can’t. That was the first few horrible days. A couple of people are trying to give it a go with takeout and delivery with limited success, or no success at all.”

Jasmine Moy, an attorney in Manhattan who specializes in hospitality law, said in an email that she, too, had received “a barrage of inquiries” about layoffs. Her clients also had questions about paid sick leave and visas for workers from other countries.

Fielding these calls filled some of the time that used to be taken up in negotiating new restaurant deals. Last week and the week before, she said, about half of those deals “basically died on the spot.”

Ms. Moy said that once the urgent employee issues had been handled, she expected to spend the next few months in one of two ways. For restaurants that are reopening, she said, she will try to get rent abatements or deferrals. For the restaurants that go out of business for good, her job will be “the assignment of lease and sale of assets,” she said.

“I don’t have any idea at this point how many will fall into that bucket,” Ms. Moy added. “But hopefully they will be few and far between.”