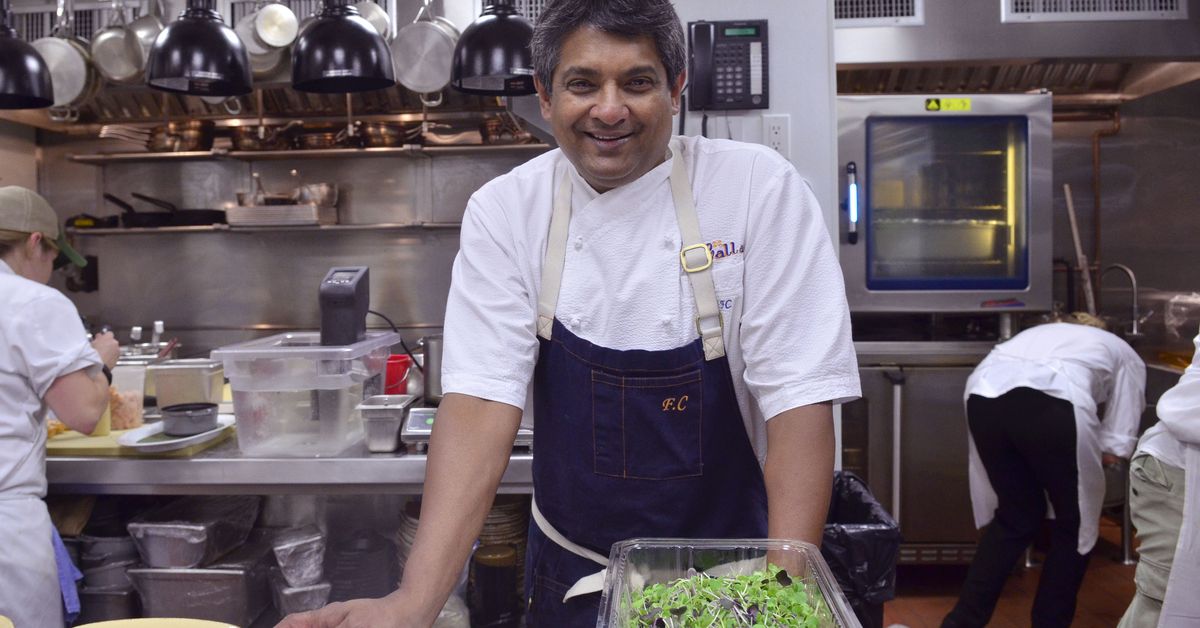 The culinary world mourned the sudden death of groundbreaking chef Floyd Cardoz, who reportedly died from complications relating to COVID-19. Cardoz had checked himself into a hospital in New York City shortly after his return from India on March 8 with fever-like symptoms. His family confirmed the news of his death to Indian publication Scroll.in.

Chefs, restaurateurs, and food writers praised his kindness and generosity, and many others wrote about his pioneering efforts to expand the understanding of Indian cuisine in the U.S. The chef and his New York City restaurant Tabla, which opened in the late ’90s, also had influence far beyond the city and Indian cuisine — many say he paved the way for other South Asians in the food industry.

Below are reactions and memories shared by people who worked with him, were mentored by him, and dined at his restaurants. Eater will continue to update this post with more reactions as they come in.

From restaurateur Will Guidara:

Floyd was my first chef after I graduated college. He was the only person in my entire life that I ever only called “chef” [instead of using their name]. When you started at Tabla, even as a manager, you had to work in the kitchen for a week. It was day two and I was chopping onions for an entire day, and he was just standing behind me picking up every onion and telling me why I fucked it up. I started out scared shitless of this guy, but by the time I left that restaurant two years later, he really was like a second dad to me. And his wife, Barkha, has always been a second mom to me — literally, she called me son and I called her mom.

A second dad that is the most unreasonable, relentlessly difficult man on the planet, stubborn beyond belief. And obviously brilliant. Cheese kulcha, tomato kalanji, avocado salad — that combination was one of the greatest things ever. His saag paneer, his chicken tikka. He was one of those guys that made me hopeful about our industry. As relentless, stubborn, and unreasonable as he was on the surface, once you got just a little below the surface, he just had the most beautiful heart. You look at the people who worked at Tabla back in the day, and we are all to this day like family. To this day we all stay in touch. And it was because at the top there was someone that you not only respected but that you love.

Few people have done more than Floyd to impact an entire industry, the career trajectories of more cooks, or the palates of more restaurant goers. He was beyond talented as a cook. He was a super-taster, big-hearted, stubborn as the day is long, and the most loyal friend, husband, and dad you could imagine. My heart is just broken. His life and career was full of triumph and adversity. We opened and closed two restaurants together and in that time he never once lost his sense of love for those he’d worked with, mentored, and mattered to. He made monumental contributions to our industry and to my organization, and his passing leaves us with a gaping hole.

Floyd set a constant tone of being the type of chef everyone aspired to be: kind, technical, generous, risk taking with flavors, but always so woven to the culture and food of his personal place. He also was ALWAYS talking about his family and he beamed with happiness when he did. He was just a good human. And a seminally important chef.

From chef Chintan Pandya of Adda and Rahi:

I have met him few times and was privileged to speak with him. He is the one who spearheaded and got Indian food on the map in NYC. Also he was someone who would help and assist you anytime he was an amazing mentor. He always would be the chef people will talk about when they mention Indian food in NYC.

Rarely is there such a clear inflection point, a distinct before and after moment, as there is in the impact of chef Cardoz on Indian cuisine in the U.S. He literally laid the groundwork for legitimizing the space that chefs of Indian origin now occupy on industry “best of” and awards lists around the world. And as if that wasn’t enough, he then redefined what an Indian restaurant could look like with Bombay Canteen and O Pedro in Mumbai. Modern Indian cuisine is what it is because of him, and his legacy as a trailblazer should never be forgotten by future generations of brown chefs — we owe that to him.

From chef Dwayne Motley of Washington, D.C.’s Truno, who was once Cardoz’s sous chef at Tabla:

My time with him changed my career. The lessons I learned under him made me the chef I am today and I wouldn’t be here without him. It’s a shame I will never get to tell him that. I didn’t know about flavor or spices until I walked into his kitchen, and I admired his discipline and his pursuit of excellence every single day. I don’t know a single person who worked at Tabla who wouldn’t walk through a brick wall for him. My heart breaks for his wife Barkha and their two sons. He was classy, a class act, and just a really good guy.

From restaurateur Roni Mazumdar of Adda and Rahi:

Floyd Cardoz has helped put Indian food on the map in America at a time (in the 90’s) when no one remotely understood our cuisine. He was one of the avant-garde chefs in the country who inspired a whole new generation of chefs and restaurateurs around the world. Today, we can aspire to be in the mainstream conversations due to his early contributions to Indian cuisine. In some form, we are all standing on his shoulders. He was a true stalwart! Most importantly, he was an incredible human being who treated everyone with grace and humility. I’ll forever cherish the precious moments we got to spend and our heart to heart conversations. I’m at a loss of words to describe the hollowness and sudden tragedy of this moment. My heart goes out to his wonderful family.

I just woke up to this news. It’s so fucking sad. Chef Cardoz has been one of the most influential chefs in NYC in the last few decades. He has been a leader for Indian-American chefs. I have often snarked, like poking at your older uncle, that the media (most recently in Ugly Delicious) acted like he was the only Indian chef in America but alas he was that guy. He has been at [this] since many of us Indian-American chefs were still just getting started. We all looked up to him, wanted to eat at his restaurants, and see what he was doing next. Honestly, I’m gutted. Did not expect this. Heard that he had it through the grapevine, never imagined he wouldn’t pull through.

From Vishwesh Bhatt, executive chef of Snackbar in Oxford, Mississippi:

We all know that he was a brilliant chef. In my opinion he was the greatest American chef of our generation! I know of no one else who could so effortlessly move through different cuisines, someone who knew but was always willing to learn. Floyd was a mentor, a friend, and a trailblazer who I hope gets all the accolades he should have gotten. There was no one more caring, more dedicated to the craft, and someone who was more principled. It is a terrible loss to America and a devastating one for his family. All our efforts should be geared towards helping them now.

From Dan Kluger, chef and owner of Loring Place:

I met Floyd when I was working at Union Square Cafe and he was developing the menu for Tabla in their kitchen. We immediately hit it off and I was enamored by his food. I went to work with him as part of the opening team and worked my way up the ranks to chef de cuisine. We traveled together, ate out together, and ultimately he became my most important mentor but also an incredible friend. I loved my time with him and learned more than I can put into words. He could tell where my head was at and would push me to challenge myself day in and day out. He was an incredible teacher and raised so many talented chefs.

When I moved on he was always the one I turned to, either for help or inspiration. Unfortunately we let life get in the way and didn’t spend as much time together as we should have.

Besides incredible memories I take away two pieces of advice from him that I live by.

Always cook from the heart. If your heart isn’t in it, don’t do it. I loved when he would say that to me.

Always find the gold in everything. I remember telling him how miserable I was with a new job. He kept pushing me to make the best of it and learn something from every situation that arose. And I did and it ended up being an incredible experience.

He was a truly amazing person and my heart is broken, it will be hard to think of this world without him. He touched so many ppl and has done so much for the food world.

Thank you for reaching out. My wife and I are in absolute shock at the moment. We met at Tabla. We fell in love there.

Floyd was my hero. He cared so deeply for every cook in his kitchen. He pushed us harder than any chef I’ve ever worked for. We learned discipline and respect. Respect for food. Respect for our art. Respect for each other.

Floyd took great pride in lifting up his people. Always standing by the mantra that all ships rise with high tide. He was more concerned at times with my career than he was with his own. He was selfless. He was the true definition of a mentor.

I’m not sure I have much else to give at this point. I’m happy to give more when the tears subside. For today though I’m going to drink great wine and put the tongs in my kitchen away. He would have yelled at me if he saw them.

Deeply upset to hear this news. It was an honor to know Floyd. He was a kind, ground breaking chef who paved the way for so many South Asians. I remember saving up money to eat at Tabla in college. I will miss his fierce passion and determination. https://t.co/ToBCLceFiW

Floyd did so much to advance the cause of Indian food and Indian people in America. He was generous, funny, and warm, and I’ve always wished I could turn back time and eat at Tabla. Sending love to his family. https://t.co/nLMm9ALwmW

I feel so terrible for his family and his two sons. All the cooks and managers that worked under him. Easily one of the most beloved people in the business. He was criminally under appreciated, introduced so many new flavors and techniques to America. Tabla forever ❤️ #riceflakes

@floydcardoz RIP
A pioneer & brilliant chef who showcased Indian food to the world.
shocked to say the least & my heart goes out to his family.
The heavens are fortunate & I can only imagine the wonderful feast he would make there
U will always be the ‘Modern Indian Chef’ for me pic.twitter.com/oqqRgdYrns

Bhumi Pednekar baked a pizza from scratch! – Times of India