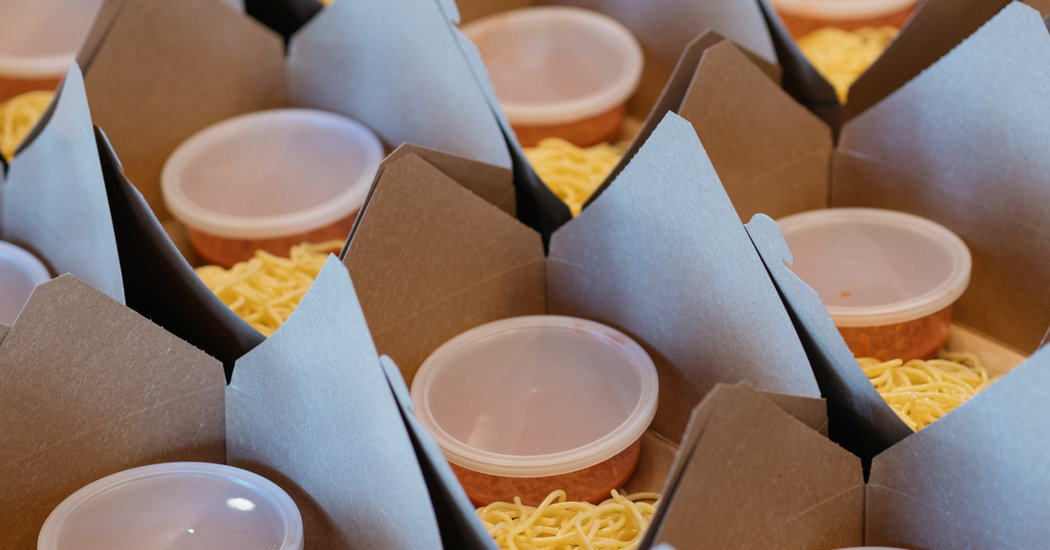 Quillian Fennessy is used to feeding other people. She made about $700 a week waiting tables at Seattle’s oldest vegetarian restaurant and at a friendly Italian place in the city’s Ravenna neighborhood whose menu includes a section titled “pastabilities.” It was enough to pay rent on a shared house and allow her to pursue her musical career with a psychedelic pop band called Fruit Juice.

But this week, she’ll get only a small fraction of the money — the last restaurant paychecks she will see until the threat from the coronavirus is gone.

On Tuesday, the number of states that had temporarily banned or limited dine-in service at restaurants and bars numbered 26. Dozens more cities have done the same. Ms. Fennessy, 32, is one of millions put out of work by the closings.

“I don’t think reality has quite set in yet,” she said. “There’s an ominous undertone, for sure.”

So on Monday, she walked to Salare restaurant for something no one could have imagined a few weeks ago: a soup kitchen of sorts for restaurant workers, set up by the restaurant. For the first time, an industry built on caring for other people is struggling to figure out how to care for its own.

Around the country, restaurant customers and owners have mounted efforts, large and small, to raise money for workers, including at least 6,000 online efforts at gofundme.com to help the cooks and waiters at their favorite spots. The Jean-Georges restaurant group has raised more than $100,000 on the site. In Marquette, Mich., residents have collected about $13,000. The need in the town was so great that organizers had to limit the first round of giving to the first 200 workers who signed up.

In Seattle, Ms. Fennessy was one of about 40 laid-off restaurant workers who showed up at Salare to get a spaghetti-and-meatball dinner, and a bagel and hard-boiled egg for the next day’s breakfast. The chef and owner, Edouardo Jordan, hopes to give away 200 meals a day.

Mr. Jordan used $10,000 in grant money from the LEE Initiative, a small foundation that the chef Edward Lee in Louisville, Ky., set up years ago to train the next generation of women chefs and young hospitality workers. With that seed money, Mr. Lee was able to create what is fast becoming a chain of restaurant-based relief centers.

Mr. Jordan’s operation is one of 13 that the LEE Initiative is financing at restaurants around the nation to feed unemployed hospitality workers. Feeding centers are about to open in cities including Atlanta, Denver and, on Thursday, Brooklyn, at the restaurants Gertie and Olmsted.

The efforts are part of the Restaurant Workers Relief Program, which Mr. Lee started with financial help from the Kentucky bourbon distillery Maker’s Mark a week ago, after Kentucky’s governor closed that state’s dining rooms. Mr. Lee realized that he and other restaurateurs in Louisville had refrigerators packed with perishable food, no customers and an unemployed work force that would no longer receive daily staff meals or paychecks.

The first night he served 250 people. The lines kept growing. In two days, he was serving 400 people an hour.

“They are in a state of shock and panic and they are desperate,” Mr. Lee said. “We had grown men crying. Families with disabled children. They don’t have a safety net. We are literally trying to hold society together.”

Mr. Lee began calling fellow chefs like Nancy Silverton, in Los Angeles, who jumped right in. On Thursday, she began feeding workers in front of Mozza2Go.

“It’s like a little glimmer of hope at the end of the day for people,” she said. “You can see it their eyes.”

Like Ms. Silverton, Mr. Jordan welcomed a chance to hire back a few employees he had laid off to run the kitchens, which offer two meals and a few pantry items like toilet paper, diapers and tampons to anyone who shows up with proof they are in the restaurant business.

More traditional aid efforts are also underway. The James Beard Foundation quickly assembled a Food and Beverage Industry Relief Fund. There’s a Bartender Emergency Assistance Program, and a fund created by the Restaurant Workers’ Community Foundation to raise money for workers, and provide interest-free loans to restaurants that will need help reopening once it is safe to do so.

Because many restaurants, especially independent ones, rely on the labor of undocumented immigrants who wash dishes, bus tables and cook meals, Restaurant Opportunities Centers United is trying to raise $500,000 for an emergency relief fund in part to help them.

Luis López Reséndiz, 26, got his last paycheck on Friday from his part-time job as a buser in an Italian restaurant in downtown Los Angeles. A legal resident under the Deferred Action for Childhood Arrivals program, he has a second job that he does from home. Many of the busboys he worked with aren’t documented and live off tips, he said.

Even for workers with legal standing and plenty of experience, the options are few. Amazon and most grocery stores have jobs; Domino’s Pizza is hiring 10,000 people nationally. But work could limit unemployment benefits and expose employees to the virus.

Even applying for unemployment money is a struggle. Justin Alexander, 38, who worked for six years as a line cook at the Highland Bakery in Atlanta, is trying to finish the last pages of the application, which requires forms he doesn’t have on hand. If he is approved, he figures he might get $600 a month. His expenses, which include $1,100 in rent, a car payment and child support for his three children, total about $2,500 a month.

He plans to dig into his small savings and see if can continue doing side work installing home electronics and security systems. But that doesn’t seem promising. “Nobody wants me in their homes right now,” he said.

In Columbus, Ohio, Matt Grinstead-Mayle, 40, and his husband, Dale, 37, are making similar calculations. On Monday, Matt Grinstead-Mayle was staring at his last paycheck from the Pearl, where as a waiter he made about $1,000 a week, including tips. The check was for $25.01.

His husband is a barber who recently started his own shop, Goodfellow’s. It closed, too. They have an 18-month-old son, a little in savings and a refrigerator full of food the restaurant group let employees have when the doors shut.

Amazon and Kroger offered Matt Grinstead-Mayle night work, but another job doesn’t make sense right now. “I don’t feel the risk is worth exposing my family,” he said.

The shock is starting to wear off, and they are formulating a survival plan. Once the government website stops crashing, Mr. Grinstead-Mayle hopes to submit an application for unemployment benefits. The couple’s insurance premiums have been waived for the time being, and they plan to apply for a small-business loan to save the barber shop.

In Anchorage, Alaska, José Flores Isaza, 31, just lost his job as a bartender at the busy Spenard Roadhouse. He has been in the business for 16 years, and makes $10.75 an hour. With tips during a good shift, he might make $45 an hour.

The city closed down dine-in service at restaurants and bars on March 16. “It was wild,” Mr. Flores said. “A week ago, I had no idea I was going to get laid off and hoping to get something from unemployment.”

His immediate problem was his $450 car payment and his rent, which is twice that. He called the bank, which allowed him to delay the car payment. Then he went to Costco with money he had in his account and bought food he could live on for a while: potatoes, tuna, frozen chicken, rice, spinach. He applied for unemployment and took some work helping an older woman around the house. He would have normally done it free.

Then something unexpected happened. A friend who had heard about the layoff sent him $450 and asked nothing in return. Mr. Flores teared up as he described the gift.

“I’m sorry for getting emotional,” he said. “I just felt like somebody had my back, you know?”

It was a reminder of how kind people can be, even in terrible circumstances.

“We have to be like that,” he said. “That’s all we’ve got. Nothing else matters.”