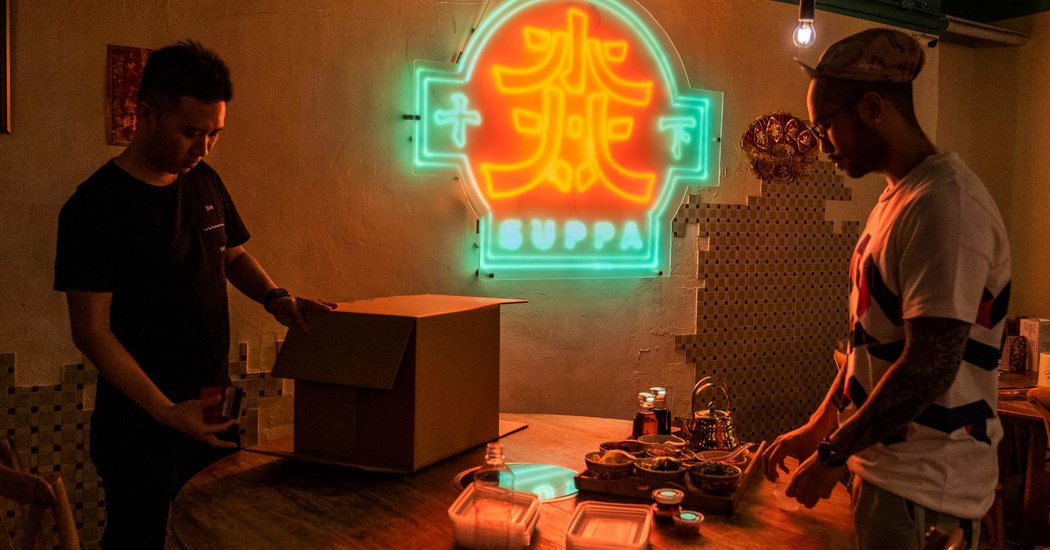 HONG KONG — What began as a classic Lunar New Year celebration ended with nearly a dozen members of a family sickened and a city of 7 million on edge.

Nineteen members of an extended family gathered in January for hot pot — a traditional Chinese meal in which diners dip raw meat, seafood and vegetables into a shared caldron of simmering broth.

By the end of the meal, 11 people had unwittingly contracted the new coronavirus, the largest single cluster of cases to date in Hong Kong. Reports about the family, later known in the local news media as the “hot pot clan,” alarmed many in this semiautonomous Chinese city, spurring restaurants to action and leading residents to avoid large banquet-style meals, as well as hot pot.

As restaurants around the world close or retool in an effort to enforce social distancing, Hong Kong’s hot pot restaurants offer both a cautionary tale and some good advice about how to continue to serve customers amid an epidemic.

Soon after the cases were confirmed, and just weeks after a lockdown was imposed in Wuhan, the central Chinese city where the epidemic started, the party venue where the family had eaten closed its doors for good.

Other hot pot restaurants saw trade drop off rapidly. Spots famous for the dish pulled it from their menus.

One restaurant, Suppa, said business was down as much as 96 percent after news of the family spread across the city. For two days, it had no customers at all.

“The hardest part is to restore people’s confidence,” said Bong Kwok, 34, one of the restaurant’s founders, who opened Suppa in 2017. “This happened too fast.”

The outbreak was the latest in a string of recent troubles for the restaurant and the city.

Jason Ho, 33, the restaurant’s other founder, described the past few months as “a roller coaster.”

After weeks of recording new cases in the single digits, Hong Kong is experiencing a resurgence in coronavirus cases, linked to travelers and overseas residents from Europe who returned to the city as the pandemic marched across the globe.

The new wave of infections prompted the government on Monday to announce a ban on alcohol sales at bars and restaurants in an effort to encourage social distancing, dealing another blow to the industry.

Mr. Kwok and Mr. Ho have been savvy about how to best continue to serve customers amid heightened tensions and changing rules. Their methods for coping could serve as a useful model for restaurateurs in other cities dealing with similar issues.

Suppa, a homonym for “give it a blanch” in Cantonese, rolled out delivery services for the first time in February, a move welcomed by loyal patrons who wanted to enjoy hot pot away from the crowds.

Those who choose to dine-in are met by an employee with a thermometer who checks their temperature at the door and asks about their travel history.

At another restaurant managed by the pair, a customer was turned away because his body temperature reached 99.7 degrees Fahrenheit, or 37.6 degrees Celsius, the low range of a fever.

In the days since the “hot pot clan” fell ill, the local news media, doctors and even local legislators have debated the relative safety of eating hot pot and other family-style meals.

Early on, one physician speculated that steam from the boiling soup carried by air currents made hot pots a particularly dangerous activity. Others have since refuted that claim, noting that any shared meal in proximity to others risks exposure.

“There isn’t sufficient evidence to show that this novel coronavirus can be transmitted through activities such as hot pots and saunas,” said Sophia Chan, Hong Kong’s secretary for health.

Benjamin Cowling, a professor of epidemiology at the University of Hong Kong, said transmission more likely “occurred with prolonged close contact in a room with poor ventilation” than as a result of any particular method of cooking.

Mr. Kwok, the restaurant owner, faulted something altogether different. He argued that it was not people’s actual diet but their media diet that had caused problems.

He blamed the unfair maligning of hot pots on the rapid spread of panic and misinformation during a crisis.

“People may not think it’s real,” he said of news shared online and among friends, “but they will share it anyway.”