All of the strawberries on her fledgling, four-acre urban farm, Common Roots Farm, ripened at once. There were more berries than she could possibly sell at her farm stand, or through her CSA, and more, even, than she could give to her volunteers or feed to her chickens. “The clock was ticking,” says Cartan. “It was bearing down on me that these were going to go bad.”

Then, by a stroke of luck, she was connected with a chef named Tabitha Stroup, who turns farmers’ unsellable produce into jams and other products. Stroup provides this service to two dozen growers—and counting—through her year-old endeavor, Terroir in a Jar, which rescued 35,000 pounds of produce from the waste stream in its first six months. This year, Stroup expects to do 300,000.

Common Roots Farm—a nonprofit designed to be accessible for disabled staff and helpers, and founded by 10 families with grown disabled children—called upon its volunteer bank, and together they harvested 120 pounds of strawberries in one morning. Cartan cranked up the AC in her son’s wheelchair-accessible van, packed it full of fruit-stuffed tote bags and rushed to Stroup’s commercial kitchen across town.

A week later, Common Roots Farm bought that surplus back in the form of syrups, shrubs and marmalades at wholesale distribution cost and went on to sell them at a 100-percent markup. “That’s the kind of thing that makes the difference between a small farm staying alive financially and not,” says Cartan. 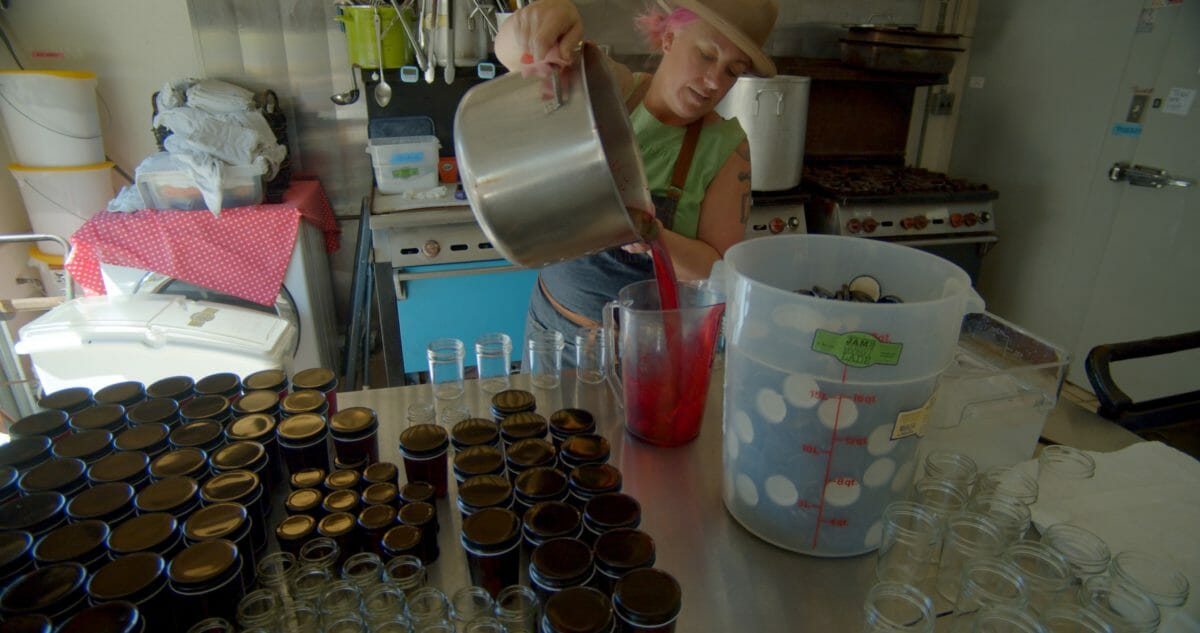 Terroir in a Jar is part of an explosion of efforts trying to put a dent in the global food waste problem—a big task, given that nearly 50 percent of produce goes unused. But, amidst a boom in the “ugly produce” marketplace, Stroup says she is pursuing a unique angle: saving the “funky monkeys,” in her words—those unsellable, bruised, bumpy, overripe, overly juicy and excess fruits and veggies—from going to waste, while giving small, struggling farmers a much-needed fiscal boost.

“[Small farmers] are struggling, but they’re doing it because they love it,” says Stroup. “And they deserve the opportunity to make more money.”

Stroup tailors each farm’s creations to evoke a unique sense of place, or terroir. For example, when the 45-acre organic Everett Family Farm had strawberries in need of saving, Stroup strolled through its lush fields and noted how herbaceous and earthy it smelled. “You can smell the tarragon when the sun is on it,” she says. With this in mind, she made a strawberry tarragon shrub and a culinary vinegar.

The chef’s “a-ha” moment came over a year ago when she was purchasing produce for her artisanal jam company, Friend in Cheeses. “I had this one farmer—gosh, I love them—a small, sweet family [with] a few acres, and they had an overabundance of peppers,” she says. “I was getting them for $.50/pound at the end of the season and I was like ‘that’s fucked up.’ I mean—great for me, but that’s a loss for them. So, how can I turn this around? How can I grab that same produce, turn it into magic for these farmers and sell it back to them at wholesale distribution?”

She tossed the idea out to her network and has been inundated ever since. “Farmers are clamoring at us,” she says. The demand is more than Stroup can handle in her lively 600-square-foot kitchen, where her team of three can whip up a thousand jars in one day. (Notably, she hires women only, from the Homeless Garden Project and other programs that are “helping women rise above poverty and addiction.”) Their speed is critical: During strawberry season, one of the larger growers they work with was dropping off 500 pounds of strawberries a week. On a recent morning, the staff was staring down 300 pounds of Meyer lemons that needed peeling and juicing.

“There’s too much food. I feel like Indiana Jones with the boulder behind me,” says Stroup. She is searching for an angel investor to help the business scale, and she has plans to pollinate the Terroir in a Jar model to agricultural areas across the country. “I don’t want this for myself,” she says. “This is something I’m trying to build so every community could have an outpost.”

Food trucks need prep to roll in Delhi: Get set for meals on wheels – Hindustan Times