The fate of the restaurant industry is uncertain as the coronavirus outbreak keeps customers home and forces the closure of thousands of locations.

The impact has already been devastating across the industry.

If these figures are applied to the more than one million restaurants that the NRA estimates exist across America, that would mean 30,000 restaurants are already gone. Roughly 110,000 more are expected to go the same way within the month, based on these calculations.

During the first 22 days of March, the restaurant industry lost an estimated $25 billion in sales and more than three million jobs, according to the same survey.

“Any pundit who thinks that they’re going to use a recent history — and by recent history, I mean the last 100 years, including the Depression — as a template for what is going to go on here? They’re kidding themselves,” Lipton told Business Insider on Monday. 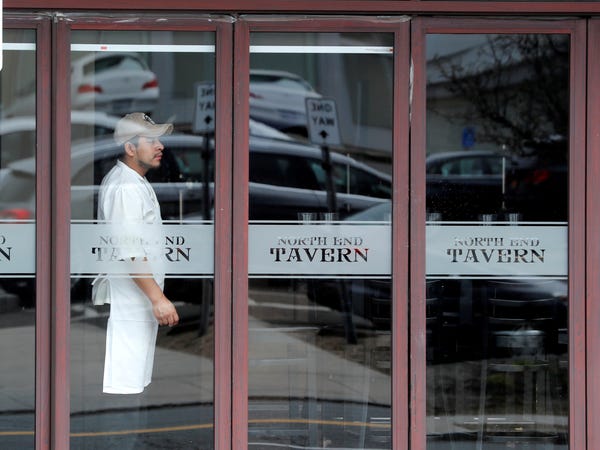 A worker looks out of a nearly empty restaurant in New Rochelle, New York on March 11, 2020.

Total restaurant transactions were down 36% in the week ending March 22, compared to the same week last year, according to The NPD Group. At full-service restaurants — which are less equipped for drive-thru and delivery orders — transactions fell a whopping 71%.

In a report last week, Cowen analyst Andrew Charles forecast “a steady, double-digit decline in same-store sales that began on March 16th and persists through the end of July.”

Cowen cited a call with Jordan Thaeler, founder of foot traffic tracking company WhatsBusy, who said that fine dining sales had dropped by more than 90%. Casual dining was down 75%, fast causal dropped 65%, and quick service or fast food dropped by roughly 50%.

This extreme financial downturn would be enough to inspire panic on its own. Now, Lipton says, this financial stress is being coupled with photos of body bags outside of hospitals.

Restaurants are already laying off millions of workers

The layoffs and pay cuts have already started across the industry, especially at sit-down-centric restaurants and chains that are less prepared to transition to takeout, delivery, and drive-thru.

The Cheesecake Factory furloughed 41,000 hourly workers. Ruth’s Chris furloughed the majority of its employees who worked in restaurants, including managers at the chain’s 23 locations where carry-out and delivery was not viable. Chuy’s closed nine of its 101 locations, as well as placing roughly 40% of its corporate and administrative staff on furlough.

Punch Bowl Social has laid off more than 1,000 employees as it closes locations around the US, according to states’ WARN notices. A representative for the trendy arcade chain said that the closures would be temporary.

Industry CEOs including executives at Texas Roadhouse, Olive Garden parent company Darden Restaurants, and Yum Brands, which owns Taco Bell, KFC, and Pizza Hut, have said they will not accept a salary at this time.

It is hard to predict which restaurants will reopen and which will stay shut forever, while loans, rent, and governments’ reactions remain in flux. Lipton predicts that many struggling restaurant chains won’t consider filing for bankruptcy until early winter, in part simply because their lawyers will have been overstretched and working from home for the prior months.

In 2021, the restaurant industry will be functioning with an entirely new set of rules, Lipton says. The $2 trillion coronavirus relief bill will provide a massive cash infusion. Lipton predicts a period of reckoning for major franchisors, many of which are already heavily indebted and will have to deal with an abrupt loss of royalties from struggling franchisees. Venture capitalists still have billions of dollars that they could invest in struggling concepts.

At this point, it is impossible to say which chains will survive the restaurant apocalypse. The period of disruption will likely last months or years, as opposed to weeks.

“The good news is people have to eat,” Lipton said. “Some companies are going to figure it out. And others, for one reason or another, won’t be able to.”