You have run out of free articles. You can support our newsroom by joining at our lowest rate!

Thanks for being a subscriber.

Thanks for visiting!
Please sign up or log in to view more. No credit card required.
{{featured_button_text}} 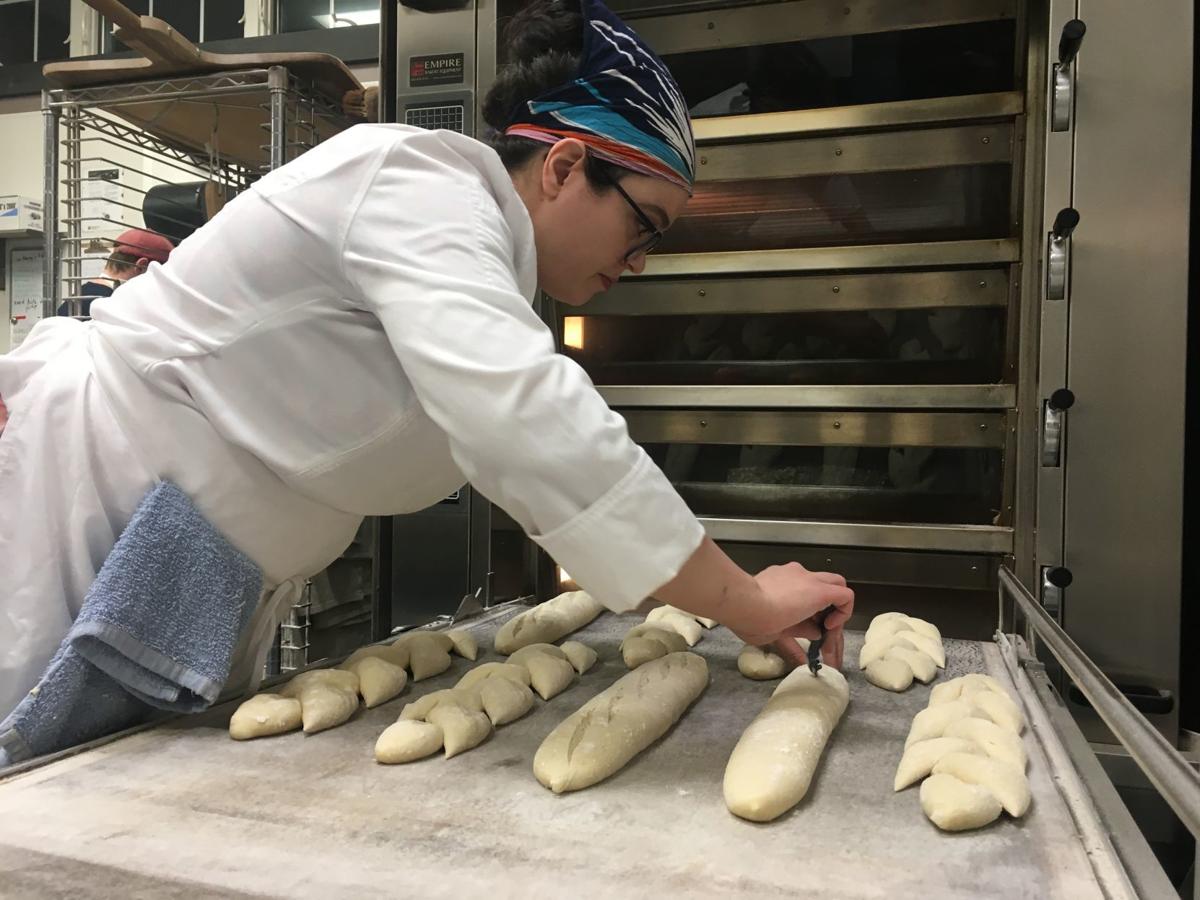 Ana Tapsieva, head baker at Batch Bakehouse, scores raw loaves of baguettes before they are slid into a 500-degree steam-injected deck oven. Tapsieva, a former soil scientist, enjoyed baking bread at home before making the jump to professional baking. She typically arrives at the bakery on Williamson Street around 1 a.m. and begins baking at about 3 a.m. 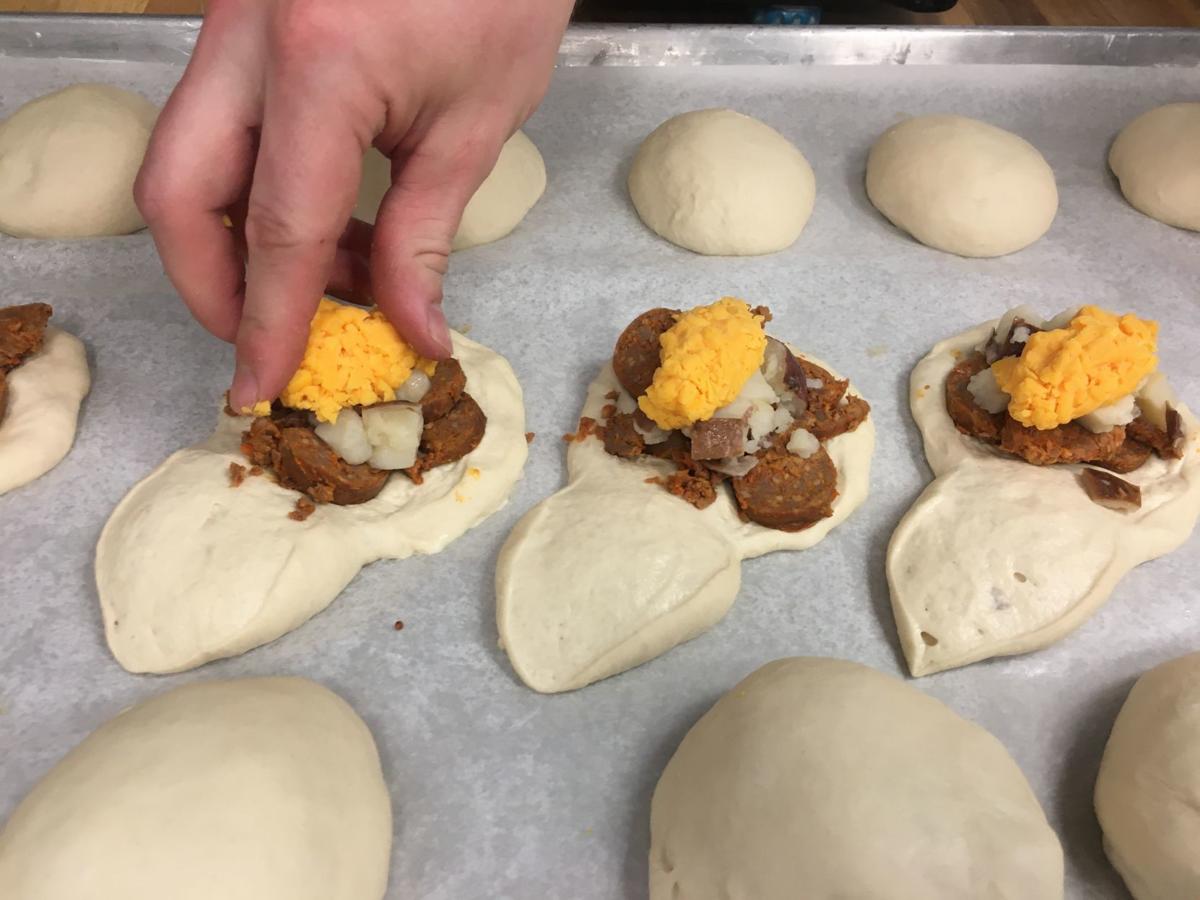 A variety of fillings can go into these small rounds of dough at Batch Bakehouse. These filled rolls include cheese, potato and chorizo sausage and are then baked to create a convenient grab-and-go snack. 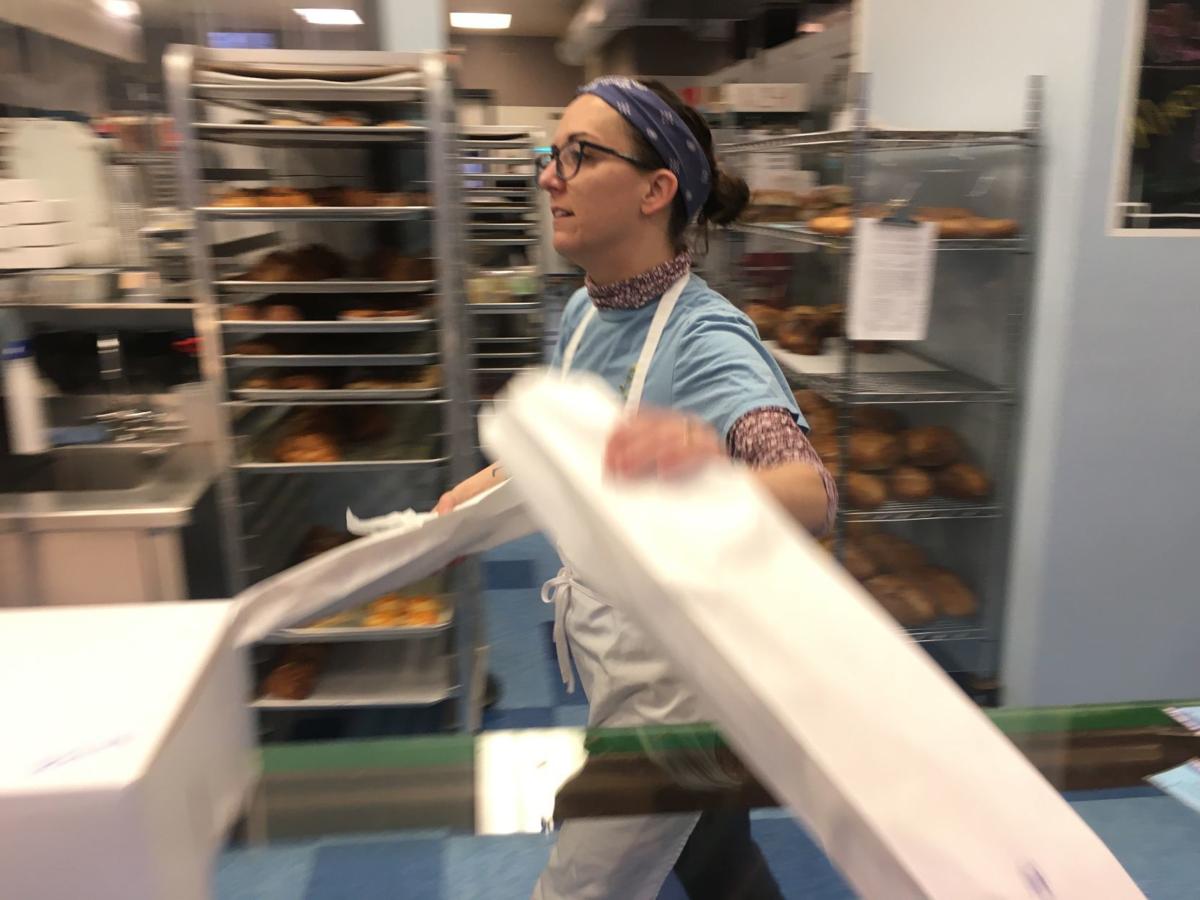 Jaycee Haas, retail manager at Batch Bakehouse, moves quickly in the morning as the rush begins at the Willy Street bakery. It’s unclear when the retail operation will resume in light of the pandemic. 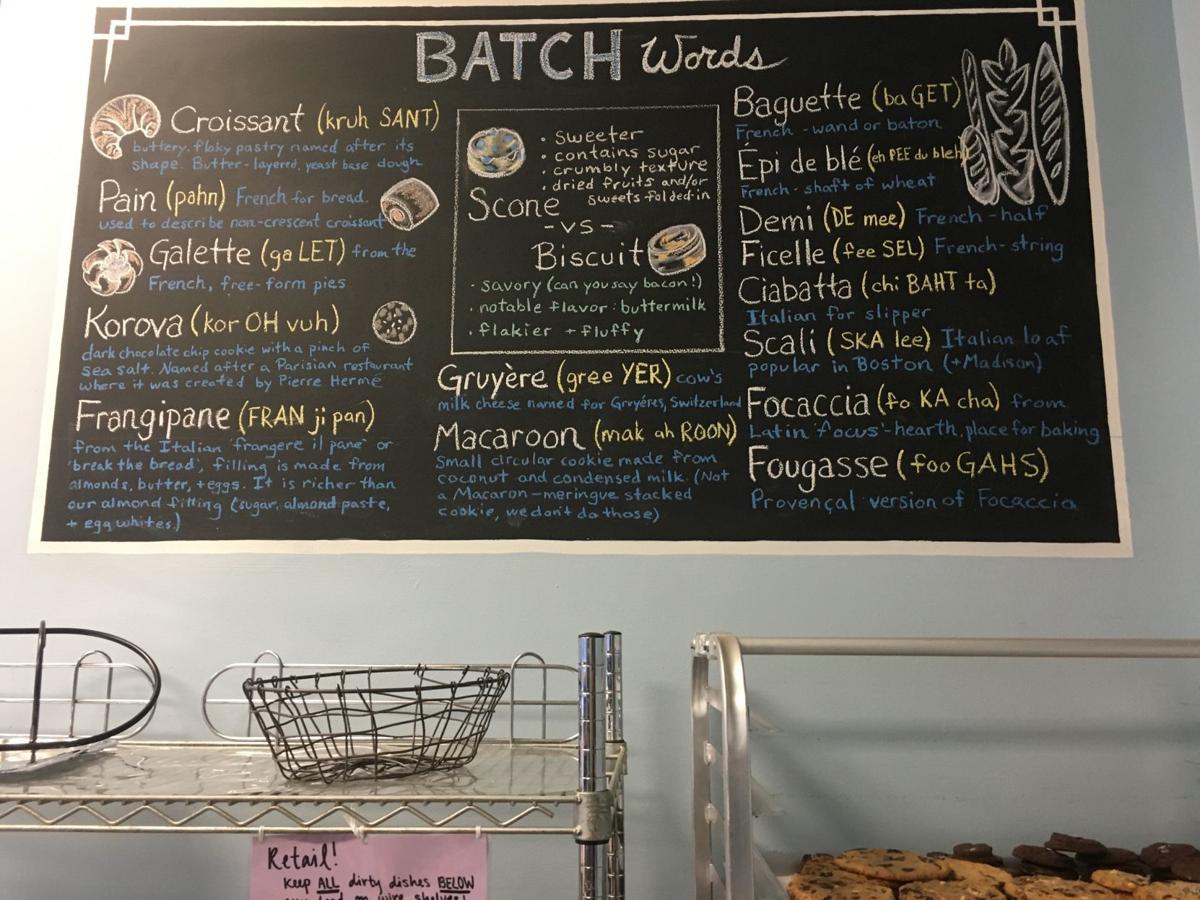 Batch Bakehouse opened in 2009 and has become a Williamson Street staple for breads and pastries. 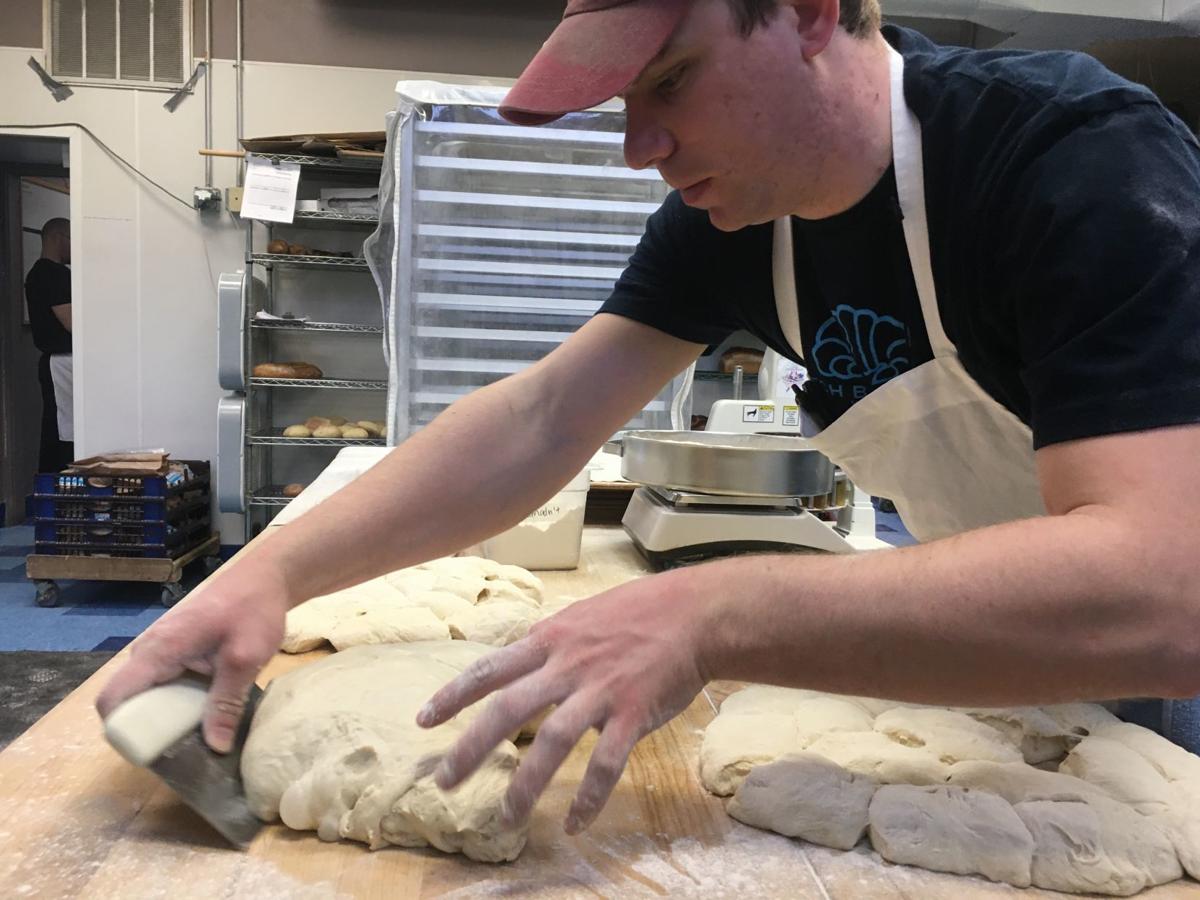 Jon Bedell, a baker at Batch Bakehouse, begins creating ciabatta buns. Dough can be mixed by 8 p.m., pre-shaped by 1 a.m., placed in the oven at 3 a.m. and out the door a few hours later.

Some call it Madison’s bakery corridor.

Batch Bakehouse and Madison Sourdough Co. on Williamson Street are hives of activity as most on the isthmus sleep.

Their ovens crank out loaves that begin pale but come out of steam-injected deck ovens golden brown. The daily creations at Batch can include baguettes, challah, ciabatta, cracked wheat and loafs of rye containing whole caraway seeds.

Down the street at Madison Sourdough, founded in 1994, its signature batards and loafs of sourdough are joined by other variations like its Country Bread, a blend of kamut, whole wheat and toasted flax and sesame seed. There’s also massive rounds of miche and Pepitas polenta, cooked with house-milled cornmeal.

A few blocks away, Origin Breads has a new space in the Main Street Industries building so it can keep up with demand for its sourdough products that come in over 20 different varieties and are sold at grocery stores and farmers’ markets. A new $40,000 Italian oven that will quadruple capacity is about to be installed, a driver is being hired for deliveries and the bakery added retail sales in its sunlit space. A spot at the Dane County Farmers’ Market is also waiting this spring.

“Our capacity was limited,” said Kirk Smock, who founded Origin Breads in 2016. “We just reached a point where we couldn’t grow the business.”

In light of the COVID-19 coronavirus, Batch Bakehouse, Madison Sourdough and Origin Breads no longer are offering walk-in sales but are taking online orders for pickup. All three continue to bake bread for their grocery store accounts, which have been deemed essential under Gov. Tony Evers’ “safer-at-home” order.

But one of the city’s oldest bakeries, however, has given up on bread.

Nature’s Bakery Cooperative has also closed its walk-in retail space but continues to make its calzones, vegan burgers and seven types of granola, which it ships nationwide.

However, it stopped earlier this year, before the pandemic, producing its loaves of whole wheat, light oatmeal, vegan rye and other varieties. Officials with the bakery, established in 1970 and now a workers co-op, declined repeated requests for interviews but in an e-mail exchange, said that bread is no longer profitable.

The bakery, at 1019 Williamson St., has three co-op members and five employees, four of whom have special needs and are part of a program that “finds work suitable for their particular needs.” A statement issued by the three-member board of directors also said that seven full-time members, with 60 years of combined service, have moved on to other careers or have retired in the last 18 months.

“We appreciate the dedication of our loyal bread customers over the years,” the board wrote. “Unfortunately, producing perishable bread for grocery wholesale has become largely unprofitable for such a small company. We have chosen to focus on our granola and veggie burgers and want all of our customers to know that they will still be available locally and nationwide.”

In these challenging times, our local businesses need your support. Find out how to get food, goods, services and more from those remaining open.

Nature’s Bakery was founded by Gini Lopez, who baked bread at home before she and two other people rented space at 1101 Williamson St., in what is now Mother Fool’s Coffeehouse. They used an oven donated by Edgewood College and Whole Earth Bakery and received donations from Sunflower Kitchen and Mifflin Street Co-op. Nature’s Bakery officially incorporated in 1975 with the purchase of its current property that also has a four-bedroom apartment that brings in revenue for the co-op.

In early February, some of the shelves in the bread aisle at Willy Street Co-op East were empty with the exception of signs from the co-op saying that they were looking for other bread options to replace what Nature’s Bakery had offered. The bakery’s bread products were carried at retailers around the city including all three Willy Street Co-op locations.

“All three of our stores will continue to carry their granolas and frozen veggie burgers and calzones. For a long time, all of the Nature’s Bakery products have been among our top sellers,” said Megan Minnick, the co-op’s purchasing director. “The quality is excellent. We value their cooperative business model and they have many many loyal fans among our customer base.”

The Madison area is a local food hub and bread is literally one of its staples.

Ralph and Ernst Clasen founded Clasen European Bakery in 1959 shortly after arriving from Cologne, Germany. Their products are sold out of their bakery’s retail store at 7610 Donna Dr. in Middleton but also at retailers such as Metcalfe’s Market, Woodman’s Market, Festival Foods and smaller operators like Jenifer Street Market and Regent Market Co-op.

Stella’s, which has made a name for itself with its Hot & Spicy Cheesebread, began baking in 1988 and also has a line of other artisan breads, baguettes, empanadas and even pretzels.

Prior to the pandemic, Manna Cafe & Bakery, 611 N. Sherman Ave., was baking six different varieties daily, including a corn Tzitzel, old-style caraway rye bread. Out in Blue Mounds, Jeff Ford has since 1996 been using natural leavening and a wood-fired brick oven at his Cress Spring Bakery to create breads like spelt, potato kamut and walnut fig.

Grocery stores like Festival Foods, Hy-Vee, Pick’n Save and Miller’s Market also bake their own breads along with Panera Bread, a national chain with six Dane County locations. Throw in national and regional bread companies and it creates a market with an overwhelming number of choices.

“There’s certainly a lot more options available now for bread. I think people are looking for a certain style of bread or certain kind of feel but it’s more competitive now for artisan bread,” said Drew Hutchinson, who in 2009 purchased Madison Sourdough from its founder, Cameron Ramsey. “Ten years ago we were competing with a couple of artisan bakeries and more national brands. We still compete with that but there’s just more local options and there’s also increased demands. We’ve seen an increase in sales in the last six or seven years. There’s a general interest in good quality bread.”

To stand out, Hutchinson moved the business in 2010 from its location on Mineral Point Road to Willy Street. Two years later he reworked all of the bread recipes and started using flour from Lonesome Stone Milling in Lone Rock, a move that increased sales by 15 percent. In 2015, the bakery purchased a $20,000 wooden mill from Austria and began milling grains from Meadowlark Organics in Ridgeway. He still uses commercial flour but the mill, which can be seen by customers through a glass window in the cafe, adds to the local flavor and to the complexity of the products.

“There’s more connection between the farmer, miller and baker and that really resonates with people,” said Hutchinson, whose products are sold at the cafe and at 12 grocery stores. “It’s demanding. You have to have the staff for it and you have to have the systems in place to do it. You either need to find a distributor or do the distributing on your own. It’s just demanding. Its 365 days a year for us.”

Batch Bakehouse opened in 2009 and quintupled its space when it moved to its current location, a former bike shop at the corner of Williamson and Dickinson streets, in 2013. The business expanded its retail hours in February to seven days a week (before the safer-at-home order) to capitalize on increased demand for its bread and pastries, which filled glass display cases and the front counter. The bakery also delivers to a number of retailers and cafes throughout the the area.

But production requires third shift hours for many. Bread dough production can start at 8 p.m., the pre-shaping of loaves at 1 a.m. and baking at 3 a.m.

“For us, (bread is) still profitable on both the wholesale and retail levels,” said Zach Johnson, whose wife and pastry chef Lauren Carter owns the bakery with Ian Gurfield. “The labor percentage on (bread) is always going to be high and a lot of people don’t want to do it. It takes a particular person.”

Ana Tapsieva, Batch’s head baker, worked as a soil scientist for six years but enjoyed baking bread at home. And while the ingredients are typically just water, flour and yeast, Tapsieva rolls out loafs by hand to get a better feel for the dough. Her dough table is near a five chamber oven set at just over 500 degrees.

“I think people assume it’s a very straightforward process but it actually takes a lot of skill and experience to do it well,” Tapsieva said as she rolled out baguettes shortly after 6 a.m. one recent morning. “It’s easy to make mediocre bread but it’s very hard to make good bread. And every day is different. It feels fresh because the dough is a little but different everyday. You constantly need to be attuned.”

Back at Origin Breads, however, the schedule is more tame. Dough is made one day, leavened overnight in a 50 degree cooler and then baked the following morning. One of the biggest additions to the 1,800-square-foot bakery is an industrial mixer that can produce 150 pound batches of dough. Before the mixer, dough was mixed by hand in 50 pound batches.

That allows Smock and baker Jennie Savoy to begin their work day around 8 a.m. Most people purchase bread in grocery stores in the afternoon so Smock, who has two young children, doesn’t see the need to work unconventional hours.

“I sort of built the business around not wanting to work these crazy hours,” said Smock, who also makes cookies and granola and compares the local bread industry to craft beer. “I think people want choices and I hope we’re moving that way with different grains and different breads.”

With a weekly newsletter looking back at local history.