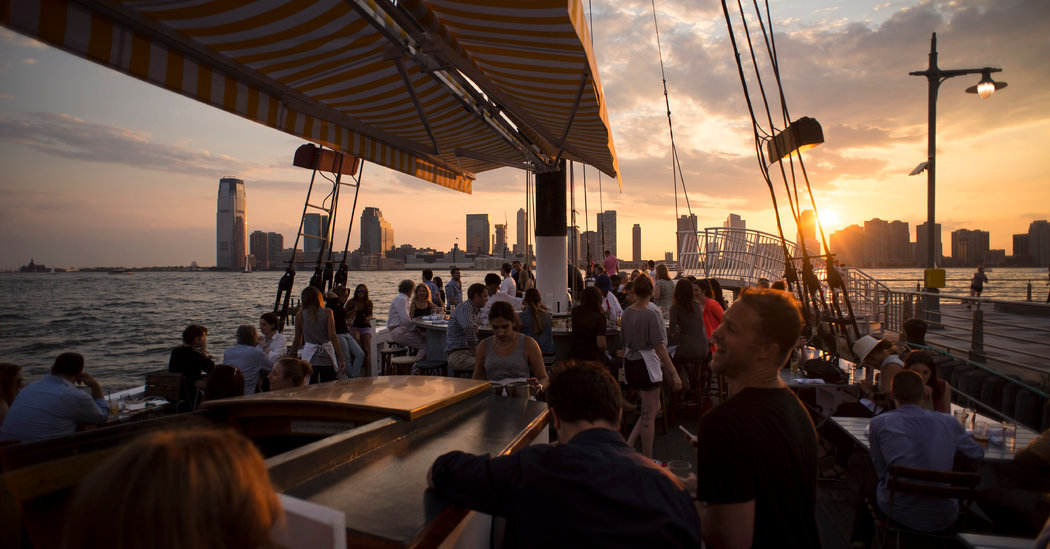 The Sherman Zwicker, a 78-year-old wooden fishing schooner, returned to New York City at the end of March after spending the winter in dry dock in Connecticut, having parts of its hull replanked by shipwrights at the Mystic Seaport Museum. With some fresh paint, a new awning and a load of supplies, the schooner would be ready to cruise to Pier 25 in Hudson River Park, where every year since 2014 it has operated as an outdoor oyster bar called Grand Banks.

The first customers of 2020 were supposed to have boarded on April 15, but the Sherman Zwicker is still docked in Red Hook, Brooklyn. Next to it is an older schooner that also serves as an oyster bar in warm weather; called Pilot, it was scheduled to start up again in Brooklyn Bridge Park on May 1.

Alexander Pincus and his brother Miles own and run both restaurants along with Island Oyster, a nonfloating oyster bar on Governors Island they had meant to reopen the same day as Pilot. Other projects were in the works for later in the season, too, including a restaurant on a retired fireboat.

Those plans were laid before Americans began dying of a powerfully contagious new disease. Now, like millions of other people whose way of making a living is temporarily banned, Alexander Pincus isn’t sure what the future holds. He is at home in Brooklyn, recovering from what he calls “a very bad” respiratory illness that he believes was Covid-19, and wondering how long his savings will last.

“I’ve got a 5-year-old,” he said. “My girlfriend was laid off. And I’m hoping our season starts soon so we can keep it all together.”

Like the Pincuses’ oyster bars, thousands of seasonal food businesses around the country are still in winter storage while would-be customers remain holed up indoors.

Some of these businesses are fixtures of the warm-weather landscape — the ice cream stands, seafood shacks, beer gardens, open-air taquerias. Others follow a more recent entrepreneurial model, selling niche products out of banged-together stalls or eye-catchingly painted trucks at outdoor markets, festivals and concerts.

Although many seasonal food businesses have a flyaway look, collectively they make a significant contribution to how people experience summer, and to the economy.

After hitting a low point around February each year, the number of restaurant employees tends to peak in June and July, when dining areas spill out to patios and gardens, tourism surges and beach towns come alive. Each summer for the past seven years, restaurants in the United States have added more than half a million jobs, according to the National Restaurant Association.

Nobody expects to see numbers like that in 2020. Chowder shacks that unlock their screen doors on Memorial Day weekend still have a chance to make their opening dates. But businesses that get off to an earlier start have already frozen new hiring.

The Pincus brothers, who had plans to bring on 425 workers for their oyster bars over the next few months, have furloughed 13 of their 18 year-round employees. Big Mozz, a New York company that was expecting to serve about half a million pounds of pecorino- and parsley-flecked mozzarella sticks at seasonal events this year, had planned to hire 200 people.

Big Mozz sells its fried cheese at Citi Field and other local stadiums, the summer-long Celebrate Brooklyn shows, a string of major music festivals around the country and catered events. But with baseball season postponed and one major music festival, the Governors Ball, already canceled, Big Mozz’s core staff of 25 people was furloughed last month.

Matt Gallira, who founded the company, said the money that people earn on short-term gigs at food stalls like his can be vital to them.

“When we travel to a music festival, we might hire 20 to 40 local staff just for the weekend, college kids home for the summer,” he said. “It’s people who depend on the hours with us to pay for their next semester at school. They also get a lot of tips at these jobs. These aren’t nothing jobs.”

Last April, for instance, a recent graduate of Rhode Island School of Design named Ruby Schechter introduced her business, the Better Pop, at the Smorgasburg outdoor food market in Williamsburg. She sold $6 ice pops made from whole fruit and kombucha frozen in a mold she designed herself that gives the pops a futuristic, modular shape. (It resembles a carton that the Jetsons might use for quail eggs.)

The shape is meant to make it easier to bite off chunks of frozen fruit, but it also looks cool, and people walking around Smorgasburg with a Better Pop pop were always being asked what it was and where it came from.

“It was a huge success,” Ms. Schechter said. By the end of the summer she was being hired to bring her pops to corporate events put on by Saks Fifth Avenue, Google, LinkedIn and other businesses. “I made a lot of money in the first year, which for a lot of companies is very hard to do.”

This year was supposed to be even better — “really huge,” Ms. Schechter said. There would be Better Pop stalls at the Governors Ball and other outdoor festivals that look increasingly unlikely now. A collaboration with a fast-casual restaurant chain has been put on hold, she said.

The Better Pop had been scheduled to return to Smorgasburg last weekend, too, when its Brooklyn markets were supposed to reopen. They are on hiatus now, along with a year-round Los Angeles edition and a planned expansion of its World Trade Center market to two days a week from one. Many of Smorgasburg’s nearly 200 vendors are hanging in limbo, according to Jonathan Butler, one of the market’s founders.

Most Smorgasburg stalls take in more than $2,000 a day, he said, while some go up to $5,000. Most hire from two to six people to help out. The total daily sales was $150,000 for each of the two Brooklyn markets and less for the Los Angeles and World Trade Center markets.

While most vendors don’t have the rent obligations that restaurant owners do, “I suspect they’re feeling a similar level of panic,” he said. For many of the newer Smorgasburg vendors, “the thing they’re most qualified to do is go work in a restaurant. So it’s pretty grim. They don’t have a lot of prospects.”

Some seasonal vendors live all year on their summertime income. Others say the money is nice, but isn’t their first priority.

Like many of the people who sell food at the Queens Night Market, an outdoor bazaar of foods from around the world that has materialized every Saturday night from April to October for the past five years, Hendra Lie does not support himself with cooking. Serving the Indonesian food of his childhood from his stall, Warung Jancook, satisfied other needs.

“The Queens Night Market is my passion,” he said. “I like to cook. I like to present myself and the culture through food that I created.”

Still, the exposure and encouragement stirred his ambitions. Before the coronavirus descended on Elmhurst, Queens, where he lives, he had been planning an Indonesian restaurant. Now, he isn’t sure.

Over the past decade or so, outdoor markets like the Queens Night Market and Smorgasburg have become some of the most rewarding pathways to learning about cuisines and dishes. Beyond the money that changes hands, they have cultural benefits that can’t be put in numbers.

“Our largest events are about experience, community and connection between people,” said Matt Cohen, the founder and chief executive of Off the Grid, a San Francisco company best known for shepherding flocks of food trucks around the Bay Area, often in the company of musical acts and fire pits.

“That casual collision connecting people in unplanned ways is something we have found to be very powerful,” he added. “It’s the same thing that makes farmers’ markets very vibrant.”

This year, Off the Grid had lined up more than 300 vendors to sell momos, lumpia, quesabirria tacos, Sichuan salt-and-pepper fish wraps and many other items. The largest and oldest of the organization’s 30 or so outdoor markets has been going on for 10 years at Fort Mason Center for Arts & Culture. This season it opened for one night, March 6.

As for reopening, Mr. Cohen said, even if San Francisco’s ban on large gatherings is lifted in early May, “we’re looking at midsummer at the earliest” before Off the Grid’s larger outdoor events will be back.

Seasonal businesses tend to be streamlined. They are built to go dormant and then reawaken on cue. Employees are usually lined up and waiting for opening day. Budgets run low. Everything is timed for the money to start circulating again in April and May.

The only thing circulating this year is anxiety. Nobody knows when people will be free to move around again, or how long it will take for them to feel safe outside.

“A lot of us vendors are thinking about are how many people are going to show up to these social events,” Ms. Schechter, the fruit pop vendor, said. “How many people are still going to be scared, and not want to put themselves in situations where there’s a lot of people?”

Against this fear, seasonal vendors hold on to hope that when the crowds do come back, they’ll be ready for action.

“People do seem really excited about the prospect of getting outside again,” Alexander Pincus of the Grand Banks oyster bar said. “That’s the light at the end of our tunnel. It’s what keeps us going every day.”

How to stay healthy this Yuletide – Mint Lounge