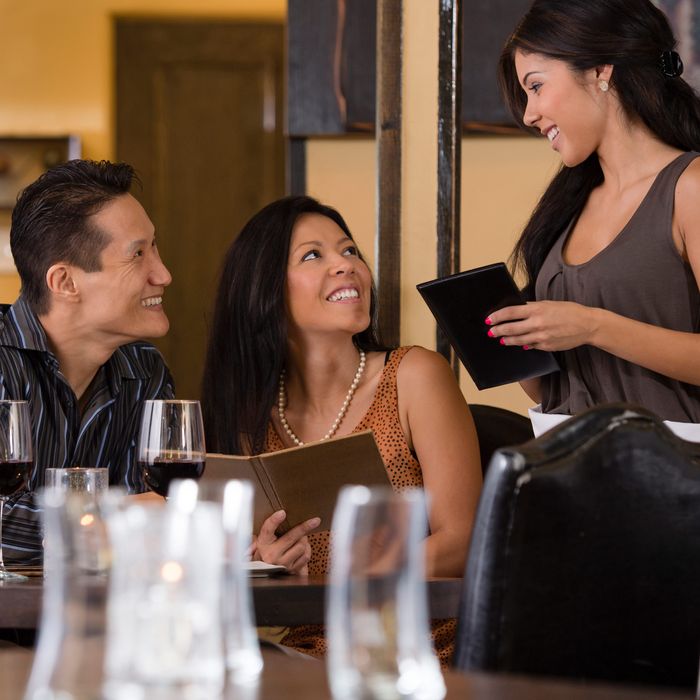 They were fun places to wear shirts with lots of different stripes.
Photo: Rick Gomez/Getty Images

The predictions for the independent-restaurant industry are nothing short of catastrophic: Even when the coronavirus pandemic ends, vast numbers of operators simply will not be able to reopen. (Some estimates put the number as high as 75 percent of restaurants.) This, of course, is to say nothing of the actual workers, whose livelihoods were wiped out more or less overnight. It is incredibly brutal, and nobody could be forgiven for wanting to find a job in any industry that offers a bit more security.

To help future generations understand what, exactly, “restaurants” used to be like, and why people loved them so much, Grub Street has put together this handy FAQ. Print it out and keep it in a safe place, so you can read it with your kids one day.

I’ve heard this word, “restaurant.” What is that?
Restaurants were places where people could gather. In exchange for money, restaurants would provide food, drinks, and warm service.

Oh, those are the places I always see in old movies. I just assumed they were fake Hollywood stuff, like zombies, or the giant West Village loft from Friends.
They were real.

People liked them?
A lot. The word “restaurant” is tied to the word “restore,” and the best restaurants made people feel very good. You’d forget about the problems of the world for a while, reconnect with friends, and generally get some time to recharge. The people who worked in them usually worked very, very hard, too. They logged incredibly long hours, just to make their guests feel happy. It was easy to be appreciative of that effort.

People would just go to eat … together?
Back in the Outdoor Times, people could walk freely and enter businesses as they pleased. We didn’t even think it was all that special; it’s just how things were.

What kind of food could you eat at these “restaurants”?
Literally anything. One of the best features about restaurants was that they were often run by people from other cultures, or parts of the world. These people would make the food they grew up eating, delicious things that could feel simultaneously new and familiar.

It sounds better than eating beans every night.
It was much, much better.

Restaurants sound like they were nice places to spend time.
They could be!

So what happened?
Governments needed to close all of the dining rooms, which was necessary for the sake of public health and safety, but then offered no firm plans to help them reopen. Some owners tried to offer takeout and delivery, but there was no real way for them to recoup all that lost revenue, even though they were still expected to pay many of the fixed costs of operation, like rent and taxes.

Did people try to help?
Yes. There were many efforts to support these businesses and the people who made them possible, but it was still no real substitute for restaurants simply being “open.”

But if everyone liked restaurants, and the people who ran them worked so hard, surely they were quite well off financially?
Not really! The people who owned them, if they were very successful, could make comfortable livings. But the people who worked in the actual restaurants often made very little money, and couldn’t get paid at all if the restaurants were closed, which, again, they all were.

That doesn’t seem like a great system for them.
It wasn’t! In fact, right before all of the restaurants closed, there was a big cultural push to improve the conditions in their favor.

Do you think this crazy idea — groups of people, gathering to eat food together while enjoying one another’s company — could work again?
Probably!

What were some of the most successful details or ideas? I want to make sure I include them in my own “restoerant” — am I saying that right?
Close enough.

So: Things I should include?
Definitely serve alcohol. And make sure you put shishito peppers on the menu.

Shishito peppers?
Yes. Nobody knows why, but for a few years, they were on every single menu in America.

Okay, what else?
Burgers are always a good idea. Pizza or some sort of noodle, too. You want food that’s delicious, but also a little difficult for people to make for themselves, so they have a reason to keep coming back.

How should I serve it?
It used to be that everyone would order their own “appetizer,” which was a small plate of food, and “entrée,” which was a slightly larger plate of food. But then the big thing became “shareable plates.” You got to try so much more food if everyone just ate off all the plates together.

Oh … yikes.
Yeah, had different feelings about germs back then. In hindsight, you might want to hold off on bringing back that idea.

A slice of gratitude: Zionsville women launch Pay it Forward with Cake – Current in Carmel