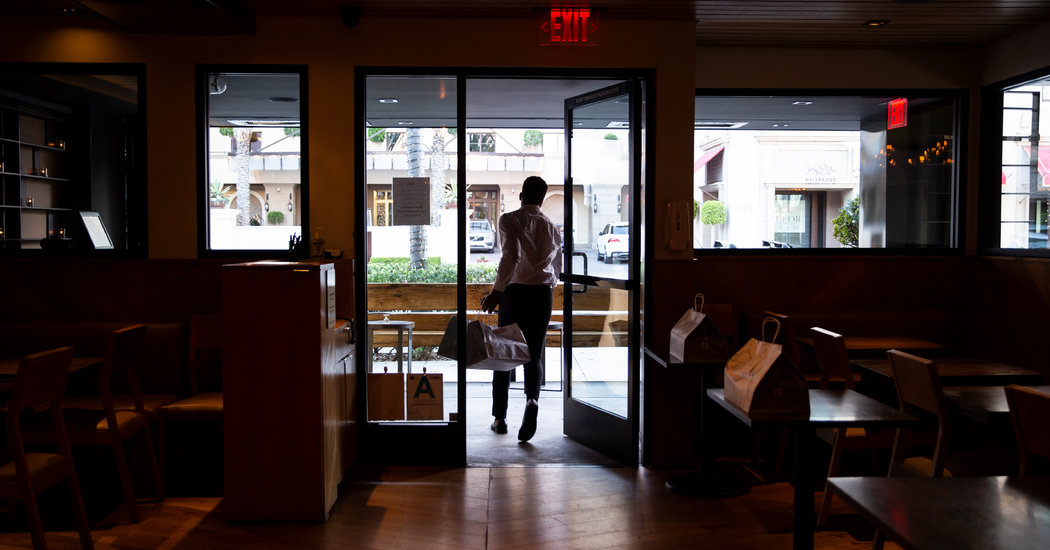 LOS ANGELES — The very small, mundane things that have become dangerous in the context of the pandemic are the ones I miss the most — a kiss on the cheek from a friend meeting me at a crowded bar, a packed car ride to the beach, a hot cheese pizza carried home in a cardboard box.

For weeks, I’ve continued to chase the comfort of takeout in Los Angeles. I’ve called restaurants, or put in orders online. I’ve read, and carefully followed, the new rules of a dozen restaurants, and been continuously moved by their staffs’ commitment to keep working, and their ability to adapt.

I’ve stocked my home with tamales from Broken Spanish, filled with chicharron and chicken, and comforting rice porridge from Porridge and Puffs. On a particularly busy day, reporting across the city, I started with a huge, crisp-edged chicken biscuit that I picked up from All Day Baby, and felt, momentarily, as if things were OK.

But as the Indian author Arundhati Roy asked recently, “Who can think of ordinary pleasure and not assess its risk?”

Over and over as the public health warnings have been updated, I’ve assessed the risk of picking up food cooked outside my own home — for myself and my partner, who is immunosuppressed. But what about the risk for the people who prep it, cook it, pack it and deliver it to us?

Restaurant workers make it possible for more people to shelter in place, by putting themselves on the front lines of the pandemic every day. Are we putting them at risk by ordering restaurant food, or are we supporting local businesses? Is it possible we’re doing both at once?

Each city is on its own timeline. Going into the fourth week of lockdown, the toll of the coronavirus in California has skyrocketed to more than 17,000 cases. Los Angeles County officials have urged people to stay home this week to slow the spread of the virus, to avoid stepping out, even for groceries.

The continuing risk to the restaurant industry’s millions of workers — many of whom are already underpaid and undervalued, uninsured and unemployed — is high, and only getting higher.

In a New York Times article about Los Angeles hospitals preparing for the peak of the outbreak here, Dr. Elaine Batchlor, the chief executive of Martin Luther King Jr. Community Hospital, made the point that people who were vulnerable to the virus tended to be workers whose job it was to care for others, but who hadn’t received care themselves.

“These are the same people who are preparing food in fast-food restaurants, taking care of people in day care centers,” she said.

That quotation stuck with me. Some kitchens are enforcing rules, keeping distance between workers on the line, handing out gloves and masks. Others are not, but in most cases workers don’t have a choice to stay home.

After an employee at a McDonalds in Crenshaw tested positive for Covid-19, the worker’s colleagues filled the parking lot with messages written on their car windows, honking their horns, demanding a two-week quarantine period with full pay. It seemed, all things considered, like such a small ask. The protest was broken up by the police.

Many restaurants in Los Angeles have already decided that takeout isn’t worth the risk. Businesses that were pushing to stay open a few weeks ago have announced their closings on social media, in some cases specifying that it’s for the safety of their staff.

Takeout seems, on some days, like an entirely superfluous luxury that’s putting restaurant workers, whose choices are more limited than mine, at risk.

Other days, I think that even if takeout isn’t quite enough to keep restaurants afloat, it’s crucial — the only way to sustain the precarious businesses fighting to stay open through the pandemic.

One estimate from restaurant analysts has it that 75 percent of the independent restaurants that close during the pandemic may not reopen, even with intervention from local and state governments. The result could be disastrous — millions of unemployed restaurant workers across the country, staying unemployed, unable to make their rent or get health insurance for themselves and their families.

I shudder to think of a post-pandemic, homogeneous restaurant culture dominated entirely by corporate chains. Of everything we knew and loved — the most delicious, idiosyncratic hard-to-categorize cooking that defines Los Angeles — becoming a relic of the before times.

On Saturday — the first in nearly two years that my neighborhood tamale vendor didn’t walk down my street with a granny cart, calling us out from our homes — I transferred money to Alfonso Martinez via Venmo, and he delivered me a brown paper bag full of tamales by car.

The collective obsession with beans may be new to some of the people cleaning out the supermarket aisles or hoarding beautiful, speckled heirlooms, but Oaxacan tamales de frijol are an ancient tradition, usually wrapped in fresh corn leaves, and eaten in various pueblos with chicken soup, or red salsa, or mole.

Mr. Martinez, who wraps his bean tamales in avocado and banana leaves, runs the pop-up Poncho’s Tlayudas, a one-man show and a hub for the city’s Oaxacan community in South Los Angeles. For his family, the craft of cooking is a gift that’s been passed down through generations as a means of economic survival.

Closing, even temporarily, is a luxury that he, and so many other small food businesses that are essential to their communities — immigrant-owned, Indigenous-owned, black-owned — cannot afford. Los Angeles, in turn, cannot afford to lose these restaurants.

The word “restaurant” comes from the Latin “restaurare,” to renew, and even without dining rooms, without regular menus and service, without consistent customers, even in the midst of a global pandemic, mass unemployment and deep uncertainty, restaurants are tapping into their extraordinary power to make people feel safe, nourished and restored.

I’m both moved by this, and infuriated. The survival of restaurants is at the top of every chef and restaurateur’s mind, along with how to rebuild the industry before it disappears, but restaurants don’t exist without the people who run them.

And it’s impossible to ignore that restaurant workers at every level, even those taking extreme precautions, are putting themselves at great risk each day to make us dinner.

The US Is Getting a National Vegan Welcome Center – VegNews