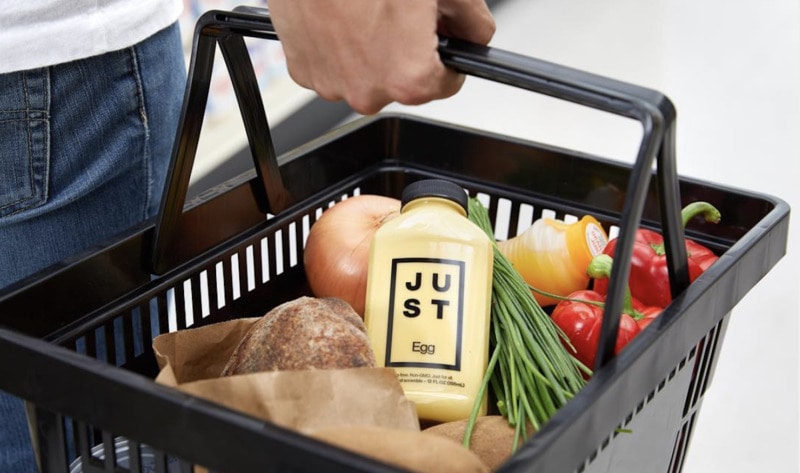 Going to the grocery store used to be fun. I loved wandering the aisles, discovering new vegan products, and picking up and putting down a package of Better Bites Bakery Do Bites ten times before ultimately deciding to treat myself. These days, grocery store runs have become increasingly disappointing as I woefully confront the empty shelves and mourn the overnight disappearance of yeast (seriously, how much bread are the residents of Newport Beach, CA actually making?). We’re all facing similar frustrations when it comes to food shopping, but there is a silver lining. Certain vegan-friendly foods tend to be in stock, no matter the store, no matter the time of day. From my experience, here are nine vegan foods you can rely on during your next trip to the store (just be sure to wear a mask and stand six feet away from anyone around you).

1. JUST Egg
While omnivores stare at the empty space that used to contain meat and eggs, I’ve scooted right past them to grab the bright yellow bottle of JUST Egg—sometimes the only product left on those refrigerated shelves. From simple scrambles to vegetable omelets to fancy frittatas, this vegan liquid egg can be used in a variety of dishes. I’ve been following a few of the home cooking demonstrations on the company’s Instagram—partly for recipe inspiration, and partly out of boredom.

2. Produce
While many of us have become acclimated to the wonderful world of vegan everything, we know how to get creative with plants. Since produce is perishable, much of the population have left it alone, which means we can still rely on these vegan essentials. Turn cauliflower into rice, spiral zucchini for spaghetti, and perhaps even try something new, like a turnip or rutabaga (both are lovely when roasted). It’s time to embrace the true plant-based nature of the vegan diet.

3. Alternative flours
Gone are the white and whole wheat varieties, but I’ve often found bags of gluten-free, buckwheat, coconut, almond, and other flour varieties left abandoned on the shelves. Since everyone seems to be on a baking spree, why not embrace that and try some alternative bakes? Put these Vegan Turmeric and Meyer Lemon Squares or Vegan Lingonberry Brownies on your “must bake” list—both call for alternative flours.

4. Vegan ice cream bars
I’ve found there’s a fifty-fifty chance of finding a pint of vegan ice cream, though the later I go, the less likely I’ll be rewarded with my favorite flavor of NadaMoo. However, even if the store is about to close, I’ve often spotted a box of vegan ice cream bars. Be it So Delicious Dipped bars, Magnum Non-Dairy Classic Bars, or Daiya Dessert Bars, at least one of these products are leftover from the ice-cream-craving crowds.

5. Frozen vegan meat products
From Field Roast Fruffalo Wings to Gardien Mini Crabless Cakes, there’s usually some sort of vegan meat option in the freezer section. Sure, your favorite brand might be missing, but use it as an excuse to give a lesser-known brand a try.

6. Store-made soups
This applies to grocers with an in-house kitchen. I’ve given up on even walking through the canned soup aisle, but to my delight, not only are vegan-friendly prepared soups available, but they’re also highly discounted. Don’t worry if the sell-by date is marked for that day—you can freeze it and have a meal to fall back on later in the week.

7. Frozen jackfruit
Don’t know what to do with frozen jackfruit (or jackfruit in any form, for that matter)? Scroll through these 11 stellar vegan jackfruit recipes for an education in this meaty, exotic fruit.

8. Dips
From hummus (of all varieties) to vegan cheese spreads, your raw veggie crudité will not want for lack of dip. Stock up on your favorite brand of blended chickpeas as well as vegan queso from Siete Foods, The Honest Stand nacho cheeses, and Kite Hill French Onion dip.

9. Vegan yogurt
Whether you prefer the soy, almond, or coconut variety, there’s likely a tub of luscious vegan yogurt waiting for you at the store. Perhaps because it’s perishable, or perhaps because omnivores have yet to discover it—either way, I’m thrilled I can rely on this non-dairy breakfast staple. Now I just have to hunt down a bag of oats to make homemade granola.

Please support vegan media
while getting the very best in
news, recipes, travel, beauty,
products, and more.
Subscribe now to our award-winning magazine!