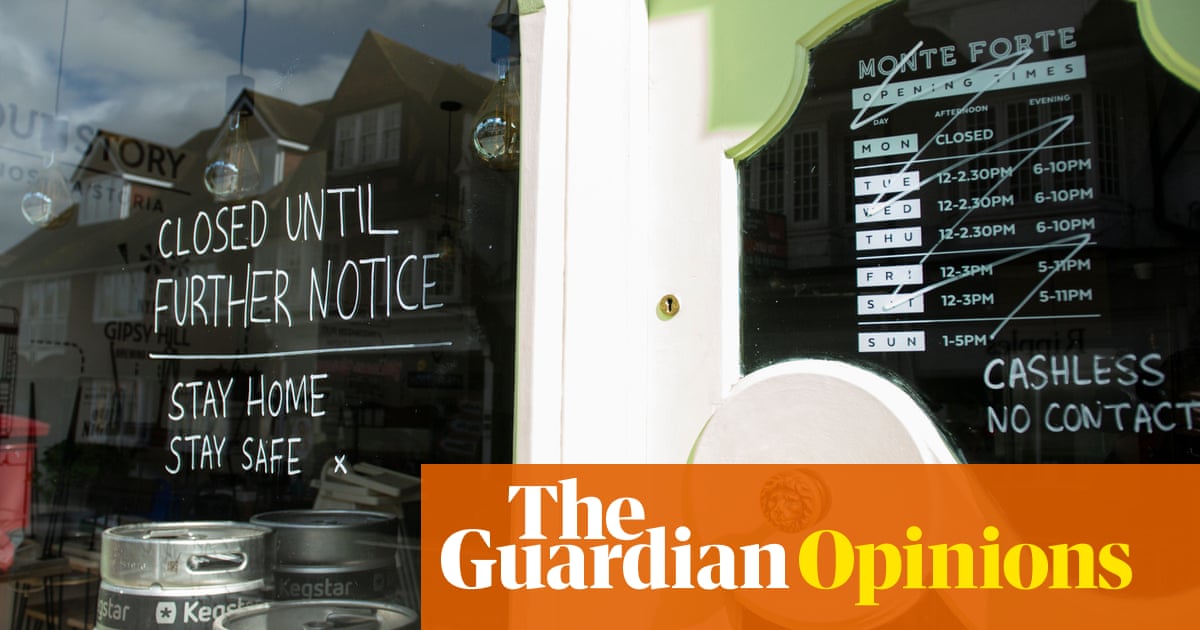 Many individuals and organisations have been offering their valuable time and resources to help the NHS and those worst affected by the coronavirus. This includes numerous chefs and restaurant staff who have been cooking, delivering food, raising money and offering help where they can.

I am proud of nine chefs from the Ottolenghi restaurants who, next week, will be volunteering at Manorfield primary school in Tower Hamlets. There, they will be feeding the children of the local GP, a pharmacist, a nurse and other essential workers, as well as some of the most vulnerable children in the area. They will be relieving a team of chefs from the Dorchester Hotel who have been cooking at the school for the past few weeks.

Even in normal times, we mustn’t forget, restaurants are vibrant community institutions. They are hubs of social interaction, they are centres of knowledge and creativity, they often lead the way in progressive and sustainable ways of cooking and serving food, and they pay wages to hundreds of thousands of people.

Sadly, our beloved restaurant industry now has a very dark cloud hanging over it. All it has created is now threatened.

In March, the government’s emergency legislation in response to the Covid-19 pandemic ordered restaurants to close with immediate effect. While these restrictions, which are undoubtedly necessary for safeguarding public and staff health, are to be reviewed every 28 days, we don’t know when we’ll be able to reopen. Nor do we know what restrictions are going to be imposed on trading hours, on density of diners, or any other limitations that we can’t envisage at this point. It will probably take months before we become profitable again.

Ours is a cash-based industry. It’s not one of the most lucrative, but it is generally sound, because British restaurants, of which we can all be immensely proud, have come on in leaps and bounds in the past few decades. Fuelled by the limitless passion of kitchen and front-of-house staff, UK restaurants are innovative, forward-looking, offer value for money and draw in a vast number of local and international guests.

Unfortunately, due to the effects of the coronavirus, we are now in an extremely perilous situation. With zero income and the future uncertain, we simply don’t have any cash to spare. Thanks to the government-funded furlough scheme, we are fortunate enough to be able to pay our staff while they are at home.

There are, however, other serious issues, the most burning of which is rent. Though some landlords have made private arrangements with tenants to forgo rent payments for a certain period, most are demanding their quarterly transfers. For businesses with zero income, this is a kiss of death. Accumulating debt now, when we are not operating, will severely hamper our ability to re-establish businesses that pay salaries, taxes, bills and rents. For many, it will simply mean that they cannot renew trading – this would be a devastating and totally unnecessary outcome. For the lucky ones, it will mean that they hang on by the skin of their teeth, but will not have enough capital to expand and create more jobs, which will be so sorely needed when this crisis is over.

Though recent legislation stops landlords from physically evicting tenants who don’t pay rent, they are still able to take legal action which puts a restaurant out of business: a winding-up petition can be imposed, freezing a company’s bank accounts. Some landlords have already threatened to do this.

In legal terms, our leases normally declare that we must operate restaurants on the sites we occupy. But we are now prohibited from doing so by the government. How can we be expected to pay rent as normal when the fundamentals of our leases with our landlords have been eradicated?

I call on the government to step in once more and fix this anomaly. The wholesale collapse of a vibrant and sound sector, under a rent and debt squeeze, will benefit no one, landlords included.

One option is for the government to bring in a total debt-enforcement moratorium for the next six months. This will allow restaurants to build up all their resources for the challenging times ahead. Landlords who rely on rents for repaying debts will also avoid finding themselves defaulting on their own obligations. Other alternatives have been suggested, all of which aim to allow restaurants to cease paying rent for a time, while supporting landlords through this loss in income.

On Sunday night the Queen, speaking to the nation about our current crisis, said: “If we remain united and resolute, then we will overcome it.” Landlords and tenants must stay united in partnership and, with the government’s help, avoid the kind of short-sightedness that will ultimately bring everyone down. We can’t let a great British industry become another victim of a once-in-a century crisis.

• Yotam Ottolenghi is chef-patron of the Ottolenghi delis and the Nopi and Rovi restaurants. He has published seven bestselling cookbooks

Nostalgia on a plate – Moneycontrol.com