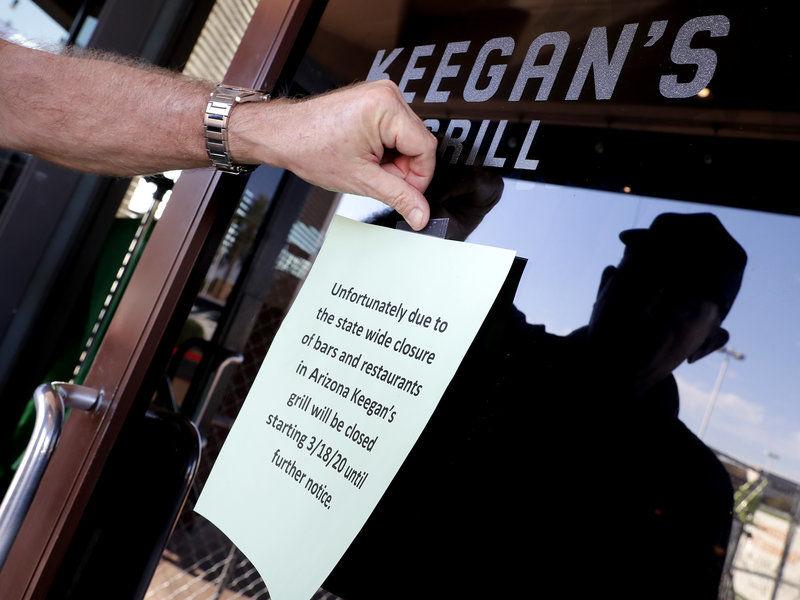 RALEIGH (AP) — Every day last week, Centro owner Angela Salamanca tried to get into North Carolina’s unemployment page and approve benefits for her laid off Raleigh restaurant workers. And every day she got nowhere. The deluge of statewide applications crashed the site, turning a flood of unemployed workers into a trickle of benefits.

Salamanca said the experience does not inspire much hope in new stimulus benefits aimed at floating small businesses through the coronavirus shutdown.

“If it’s anything like unemployment, this is going to take much, much longer,” Salamanca said. “Everyone is applying for it. … I’m doing the movements, I’m doing the things, but I feel like we’re still walking in a fog.”

Not feeling confident in the federal aid program, some in the state’s restaurant industry are calling on the North Carolina General Assembly to step in with its own aid program to help them avoid going out of business.

“I spoke to four bankers, and they are all confused as to how this federal aid is coming,” Moshakos said, speaking to a state legislative committee last week about the need for the state government to step in and add to what the federal government is doing.

The federal stimulus Congress passed does contain $350 billion that’s more or less aimed at paying small business owners not to lay off their workers. But it’s complicated. The money starts off as a loan but could possibly later turn into a grant, which doesn’t have to be repaid, depending on various factors.

There have also been numerous reports in the national media, and from the News & Observer, about banks not being ready to process claims for that federal aid, which is called the Paycheck Protection Program or PPP.

A main goal of the PPP aid is to give business owners money to cover payroll and rent, so they don’t have to lay off workers or cut hours. But for some, like Sophia Woo who owns MOFU Shoppe in downtown Raleigh, there was no help to be found.

Woo said she didn’t lay workers off, but she did cut hours to a point where workers should have been able to qualify for partial unemployment benefits. The two-year-old restaurant had closed the weekend before North Carolina’s shutdown order came down on March 17, Woo said, and is now surviving on savings and gift card purchases. Woo said her large national bank didn’t open its PPP page until April 4. By April 5, the bank told her she couldn’t apply because it had already met its funding cap.

By building incentives into the stimulus package that could forgive loans if they’re used for payroll, Woo said small businesses are effectively being asked to function as unemployment offices while restaurants are still closed. That would be fine, she said, if she was able to access the program at all.

“Unfortunately, I think the story for (restaurant owners) is that it’s been slow and frustrating,” Woo said, who is in a Facebook group of downtown Raleigh restaurant owners sharing experiences and advice during the crisis. “It was exciting at first, but no one I know of has seen any benefits. … We’re all sort of panicked right now. What we thought was going to be helpful has not been.”

In Durham, Alley-Twenty Six owner Shannon Healy said having a small local bank, M&F Bank, seemed to work out in his favor. He was able to apply for the PPP loan over the weekend and is now waiting for a decision, which could take more than a week. It hasn’t been seamless, said Healy, who laid off his entire staff, including himself, but he’s finding silver linings.

“God bless the government for trying to do something quickly, but that presents its own set of challenges,” Healy said. “The business stuff is scary. You do all this work for all these years and now there’s a lot of uncertainty. But I try to remind myself we’re healthy, my family is healthy. That is not something to be discounted.”

All businesses need cash flow to exist, but the margins of restaurants are famously thin. Money is needed to pay vendors and suppliers, to pay rent and utilities and workers, long before any food makes it to the plate. Right now restaurants are draining their savings, said Vansana Nolintha, who owns downtown Raleigh restaurants Bida Manda and Brewery Bhavana with his sister Vanvisa. Without money on hand, there’s no reopening on the other side of this.

“In six months things will be better, but a lot of small businesses who have exhausted their savings won’t be able to reopen,” Nolintha said.

Lynn Minges leads the North Carolina Restaurant and Lodging Association, a lobbying group for hotels and restaurants. At the same legislative committee meeting last week where Moshakos pleaded with state lawmakers for help, Minges said more than half of the state’s restaurant workforce has already been laid off. And the cuts will only continue without fast action.

Rep. Jason Saine, a Republican from Lincoln County who’s a top budget writer and is helping lead the committee, said the General Assembly is weighing plenty of different options.

“We certainly want to help everyone get back to work as quickly as we can,” he said at the meeting.

North Carolina is on track to surpass 500,000 unemployment claims in the three weeks since coronavirus-related business closures started in mid March, the N&O reported April 7. And one recent report said North Carolina’s dramatic spike in job losses has been the second-worst in the entire country.

Even in the best-case scenario with the federal business loans, Minges said, it will be weeks before the money starts coming in.

And even if the wrinkles with the federal loans get ironed out soon, there’s a chance the money will run out before all businesses that want it are able to get into the program — the exact problem Woo said she’s facing.

Christian Lundblad, a business school professor at UNC-Chapel Hill, recently told the N&O that the $350 billion in the federal stimulus package is only “the beginning of what is necessary” to try to stop the job losses from continuing to pile up.

Compared to the federal loan program, Minges said a state grant program could deliver the money into the economy faster, and save North Carolina businesses from having to compete for funding with those in other states.

She said the reality for restaurant owners in particular is that if they’re closed for a few weeks, let alone a few months, many will never recover.

“I think many of them live day to day, and I heard stories last week of people paying their payroll on their credit cards,” Minges said in an interview.

But the $100 million she wants the legislature to put aside for those business grants isn’t a small price tag. That’s slightly more than the combined annual budgets of the N.C. Department of Labor and Department of Environmental Quality.

The grant program wasn’t the only idea Minges had for the legislature. She also offered a more creative solution that would cost the state less but also wouldn’t appeal to all restaurant owners. She suggested that if restaurants keep paying their full staff, the state should pay the owner the equivalent of what the workers would’ve received if they had all been laid off and gotten unemployment benefits.

“The business would still operate at a loss based on that,” Minges said, since unemployment doesn’t cover anyone’s full salary. “But they would still retain the employee, the employee would still be paid, and the only liability to the state would be what they’d be paying anyway.”

Not every business would be interested in such a deal, she said. But for some, especially the more established places with trusted veteran staff, it could be worth losing a little bit of money to ensure they would be able to re-open quickly and smoothly.

She and Moshakos both asked for a delay in the state tax deadline — which GOP lawmakers as well as Democratic Gov. Roy Cooper have since said they will support.

Politicians are also looking at some other angles to help restaurants, like Republican Sen. Rick Gunn of Alamance County, who last week suggested allowing bars and restaurants to sell back unopened bottles of liquor to the state-run ABC stores.