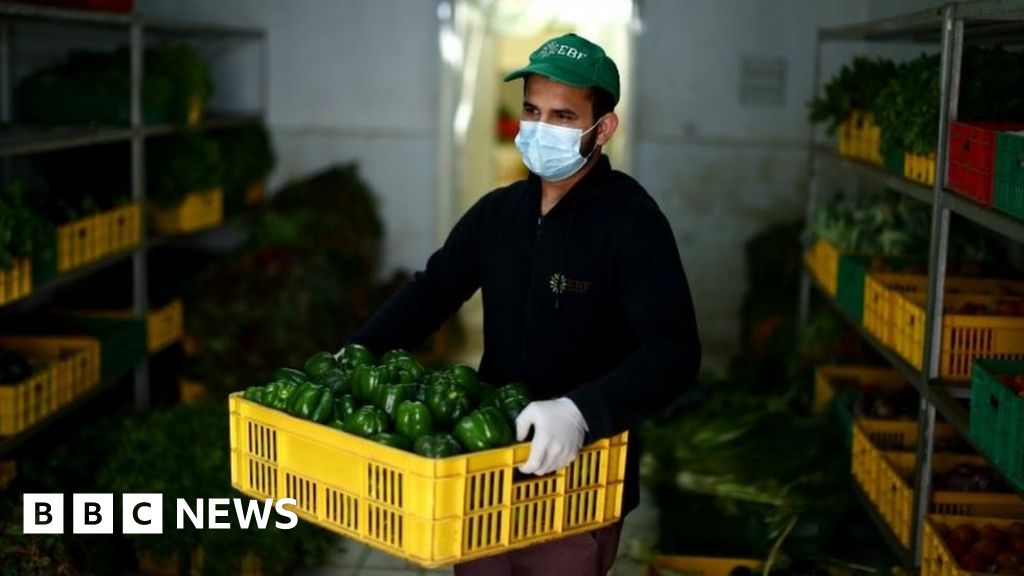 As the world’s population was plunged into lockdown, our social media feeds became filled with stories of shortages at local supermarkets.

But with many restaurants and other areas of the hospitality industry effectively shut for business, food producers are warning they actually have too much stock which will now go to waste.

These are some of the ways the coronavirus pandemic is impacting the supply chain of food around the world.

1. Milk down the drain

With coffee shops closed completely in some countries, oversupply of milk is emerging as a real side-effect of the pandemic.

Dairy Farmers of America, the country’s biggest dairy co-operative, is estimating that farmers are having to dump 3.7 million gallons (14 million litres) of milk every single day because of disrupted supply routes.

This issue is not only being seen in the US, with dairy farmers in the UK asking for government help because of their own surplus problems. Peter Alvis, chair of the Royal Association of British Dairy Farmers, says about five million litres per week are at risk.

He warned farmers receiving reduced value for their output or having to dump their excess are faced with severe economic repercussions amid already tight margins.

Closures are impacting all areas of agriculture. Some producers have tried to pivot to supplying ordinary shoppers, but changed market demand and excess stock remains a problem across the sector.

The New York Times, which interviewed some US producers, cited an example of one chicken processor having to smash 750,000 unhatched eggs every single week. They also spoke to an onion farmer who was having to let most of his harvest decompose, unable to re-distribute his onions in high enough qualities and without the facilities to store them.

In India, tea planters are warning that lockdown measures have already caused the first wave of their precious Darjeeling crop to go to waste and there are fears for the second.

On top of oversupply and the difficulty in pivoting toward retail consumers, farmers in a lot of places are also encountering problems because of staffing shortages.

Self-isolation and social distancing guidelines are reportedly slowing picking efforts in places, and national lockdowns are disrupting the usual international flow of labour across the industry.

Last week Germany made an exception to its country’s lockdown to allow thousands of Romanian and Polish workers to fly in to help with the spring harvest, especially with picking strawberries and asparagus.

There has also been a ‘Feed the Nation’ campaign launched in the UK to encourage domestic workers to plug any labour gaps to avoid food waste.

The pandemic has led to some changes in what we are trying to buy. For example, the UK has seen demand for flour soar in recent weeks as people stuck at home increasingly turn to home-baking.

According to new data, cited by BFMTV, French shoppers have increasingly been buying more organic food since coronavirus fears took hold of the country.

This could be because they are shopping at smaller, local stores – experts say – or because people want to eat more healthy and local food during the outbreak.

The revelation comes as France’s minister for agriculture called on local officials to promote the re-opening of food markets across the country.

They were previously ordered shut over safety concerns, but have been gradually returning with guarantees that social distancing rules are in place.

Take UK pub closures for example. Much of the industry’s current supply of lager and ale could now go to waste under government rules which mean they could be closed for the foreseeable future.

Some beers have a best-before date of just weeks – which means thousands of unused barrels in pub basements could be undrinkable by the time the lockdown is lifted.

People in the industry warn this could mean large financial losses for businesses.

…But it’s not bad news for everyone

Some parts of the food industry are benefiting from our changing consumption habits.

US sales of orange juice, which had been on a gradual decline, are said to be up 38% on last year’s figures.

“The immune-boosting properties are the demand-side attraction while there are simply not enough tanker spaces, with airlines not flying, to bring the product to markets.”

The demand is good news for orange growers, especially in Florida and Brazil – who supply big brands like Tropicana.