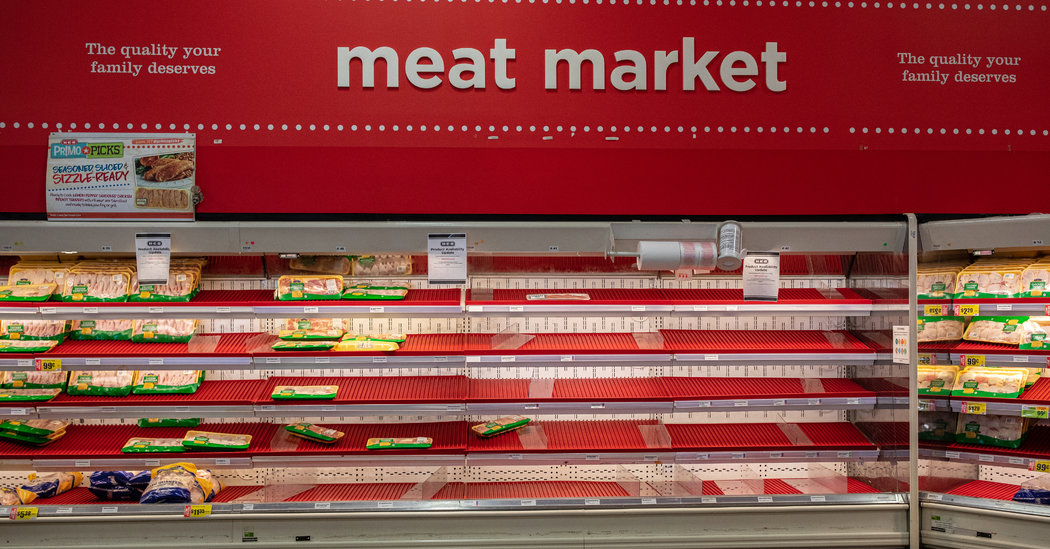 The nation’s food supply chain is showing signs of strain, as increasing numbers of workers are falling ill with the coronavirus in meat processing plants, warehouses and grocery stores.

The spread of the virus through the food and grocery industry is expected to cause disruptions in production and distribution of certain products like pork, industry executives, labor unions and analysts have warned in recent days. The issues follow nearly a month of stockpiling of food and other essentials by panicked shoppers that have tested supply networks as never before.

Industry leaders and observers acknowledge the shortages could increase, but they insist it is more of an inconvenience than a major problem. People will have enough to eat; they just may not have the usual variety. The food supply remains robust, they say, with hundreds of millions of pounds of meat in cold storage. There is no evidence that the coronavirus can be transmitted through food or its packaging, according to the Department of Agriculture.

Still, the illnesses have the potential to cause shortages lasting weeks for a few products, creating further anxiety for Americans already shaken by how difficult it can be to find high-demand staples like flour and eggs.

“You might not get what you want when you want it,” said Christine McCracken, a meat industry analyst at Rabobank in New York. “Consumers like to have a lot of different choices, and the reality is in the short term, we just don’t have the labor to make that happen.”

In one of the most significant signs of pressure since the pandemic began, Smithfield Foods became the latest company to announce a shutdown, announcing Sunday that it would close its processing plant in Sioux Falls, S.D., after 230 workers became ill with the virus. The plant produces more than 5 percent of the nation’s pork.

“The closure of this facility, combined with a growing list of other protein plants that have shuttered across our industry, is pushing our country perilously close to the edge in terms of our meat supply,” Smithfield’s chief executive, Kenneth M. Sullivan, said in a statement.

As of Saturday, the plant’s Covid-19 cases were more than half South Dakota’s active total, Gov. Kristi Noem said. She called the outbreak an “alarming statistic” and asked Smithfield to shut down the facility for two weeks.

The problems at the Sioux Falls pork plant show the food processing industry’s vulnerability to an outbreak. Employees often work shoulder to shoulder, and some companies have granted sick leave only to employees who test positive for the coronavirus. That potentially leaves on the job thousands of other infected workers who haven’t been tested, hastening the infection’s spread.

Other major processors have had to shut down plants. JBS USA, the world’s largest meat processor, closed a plant in Pennsylvania for two weeks. Last week, Cargill closed a facility in Pennsylvania where it produces steaks, ground beef and ground pork. And Tyson halted operations at a pork plant in Iowa after more than two dozen workers tested positive.

“Labor is going to be the biggest thing that can break,” said Karan Girotra, a supply-chain expert at Cornell University. “If large numbers of people start getting sick in rural America, all bets are off.”

At the other end of the supply chain, grocery stores are also dealing with increasing illnesses among workers, as well as absences by those afraid to go in to work.

Even as company officials called them “essential” for their role in feeding the country, grocery store workers went weeks without being provided with face masks and other protective gear.

Some food companies have been slow to provide the gear, while others tried but found that their orders were rerouted to the health care industry, where there is also a dire need. A few grocery workers say they are still waiting to be supplied with masks, despite federal health guidelines that recommend everybody wear one in public.

The workers also face a threat from their exposure to customers, who continue to stock up on food. Some, the workers say, don’t wear masks and fail to keep an adequate level of social distancing.

There are no government agencies tracking illnesses among food industry workers nationwide. The United Food and Commercial Workers International Union, which represents 1.3 million grocery store, food processing and meat packing employees, said on Monday that at least 1,500 of its members had been infected with the virus and that 30 of them have died.

“The Covid-19 pandemic represents a clear and present danger to our workers and our nation’s food supply,” U.F.C.W. International’s president, Marc Perrone, said.

Even before the illnesses began to spread through the industry, the supply chain had been tested intensely. Truck drivers, who were already scarce before the pandemic, couldn’t make deliveries fast enough. Hot dog factories and dairy farmers ramped up production in response to waves of panic buying.

Those surges continue to take a toll on a system that had been built largely for customers seeking speed and convenience, not stockpiling. On Sunday, Amazon said it was getting new customers seeking online grocery delivery from Whole Foods and Amazon Fresh to effectively sign up for a wait list. It’s an unusual concession for an internet giant that is used to unimpeded growth.

On some days, shoppers still cannot find flour, eggs or other staples that are in high demand. Retailers and manufacturers have offered reassurances that these shortages are temporary and merely reflect a distribution and production network that cannot work fast enough.

The parts of the food system that will suffer the worst disruptions are the ones dependent on heavily consolidated supply chains that employ large numbers of people, Mr. Girotra of Cornell said.

The Smithfield plant in South Dakota is a stark example of a vulnerable link in the chain. On its own, it produces 130 million servings of food per week. It employs 3,700 people, many of whom work closely together deboning and cutting up meat.

Last week, South Dakota officials watched the number of cases there increase at an alarming rate. Smithfield said it would shut down the building for three days to sanitize the facility. But as the number of Covid-19 cases surpassed more than half of all cases in Sioux Falls and the surrounding county, state officials asked the plant to close for 14 days “to protect the employees, the families, the Sioux Falls community and the people of South Dakota,” Governor Noem said on Saturday.

The next day, Smithfield said it would shut down “until further notice” and pay its workers for the next two weeks.

The state has not reported outbreaks at any other meat processing plants. South Dakota officials said Smithfield had ramped up testing of its employees, suggesting that this could have resulted in rates that were higher than in other populations in the state.

Some big food producers are coming up with contingency plans. Absences have risen at some plants run by the Mississippi-based chicken processor Sanderson Farms, though not at a level that would significantly disrupt production, said Mike Cockrell, the company’s chief financial officer.

The company has explored alternatives in case large numbers of its workers become sick. Much of the labor at a processing plant involves deboning chicken and dividing it into cuts like breasts, thighs and wings. A reduced staff could continue packaging chicken but skip the labor-intensive process of dividing up the birds.

“You could change your mix and produce a less consumer-friendly product with fewer people,” Mr. Cockrell said. “That’s not a disaster.”

At the grocery store, he said, “you would see a whole chicken, and you could take that chicken home.”

In the grocery industry, many of the solutions to keeping the supply chain functioning are also simple, workers say. The U.F.C.W., for instance, is urging states to mandate that shoppers wear masks and appealing to customers to “shop smart” by refraining from touching products, using a shopping list and making fewer trips to the store.

“I have seen whole families out like it’s an outing,” Mr. Squeo said. “This can’t continue like this. We need to truly change how we shop. Our lives are at stake.”