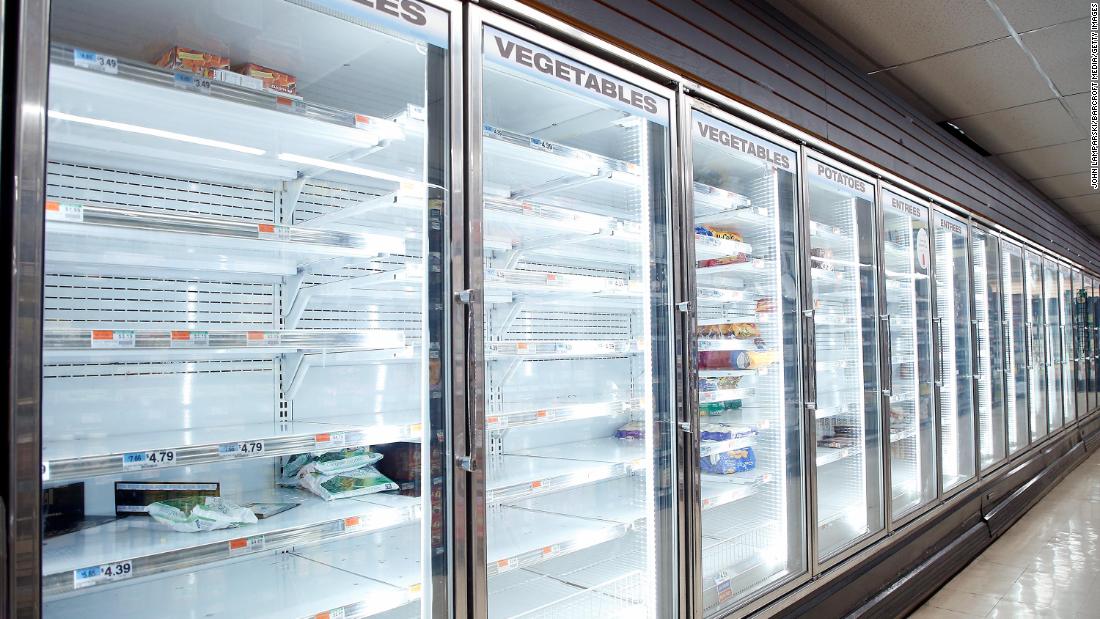 A version of this story appeared in CNN What Matters newsletter. To get it in your inbox, sign up for free here.
Health professionals — doctors, nurses and everyone down the line — are the rightful and obvious heroes of the pandemic, but if this dark episode has taught us anything about the way we live today, it could be that our society rests on the backs of a lot of people who cannot simply stay home and chill while the coronavirus blows through.
Food workers are front-line workers too — You probably saw the headline recently that one of the largest hog processing plants in the country had ceased production for the foreseeable future. The reason? Employees at the plant, a Smithfield operation, account for about half of the coronavirus cases in South Dakota.
Similar closures have hit plants in Pennsylvania and Iowa and the CEO of Smithfield said the country’s meat supply is at risk.
Are shortages coming? Yes, if we panic — We’ve already seen runs on toilet paper and cleaning products. Will people stockpile bacon in their freezers if they fear a pork shortage? Please don’t. The US is not running out of meat. It’s not that there’s no meat. It’s that, at the moment, there are gaps in the way we process it and get it to consumers.
Americans are being told to visit grocery stores only when they must. Grocery store workers do not have that luxury. Read this story about how clerks are on the front lines of this pandemic.
Food, food everywhere, but not a bite to eat — Keeping the supply chain going while also keeping farmworkers and meat cutters, along with packers and truck drivers and warehouse workers and grocery stockers and checkout clerks, healthy is one priority.
Another problem is finding ways to get food to consumers, now that restaurants, office canteens, school cafeterias and so many other places people used to go eat are closed. The current situation is this: Farmers are dumping food, including milk, even as people grow increasingly desperate and lines grow at food banks.
“It is a cascading series of events here that is disrupting the entire food chain,” said Tom Vilsack, the former Iowa governor who served as secretary of agriculture during the Obama administration, in an interview with CNN on Monday. “You start ending school lunch programs, universities shut down, food service shuts down, tourism and hotels have low occupancy and at the end of the day you have a tremendous amount of the overall supply of food having to be redirected.”
He said the government will need to spend money to buy food from growers and give it to food banks.
Farmworkers are afraid — CNN’s Catherine Shoichet wrote a must-read piece over the weekend about farm workers, whose unions have raised the alarm about safety conditions for the workers who pick our produce.
That’s assuming there are workers to pick the produce. These are likely to be people who already work in fear of deportation. Now they’re working in fear of infection. Shoichet writes that fewer people are showing up for work, fearing for their safety. Seriously. Read this story.
It’s not just the US — The UN warned this month that the response to the outbreak threatens the global food supply.
CNN’s Jessie Yeung summarized the report: “Border closures, movement restrictions, and disruptions in the shipping and aviation industries have made it harder to continue food production and transport goods internationally — placing countries with few alternative food sources at high risk.”
She also pointed out massive corporations like Nestle and Unilever have warned of a food crisis and pointed out the food supply chain is international. The US relies on other countries for its food supply. Other countries, in turn, rely on the US. Here’s data on agricultural imports and exports maintained by the USDA.
One more thing — Recall that when President Donald Trump launched his trade war on China, it was US farmers who were hardest hit by Chinese retaliations and who needed two separate US government bailouts. They were still seeing a rise in bankruptcies even before coronavirus hit the US. Will they need a third bailout? Maybe.

In my house, we are trying very hard to not go to the grocery store. But it’s hard.
We joined a CSA (community supported agriculture) group that delivers local produce. And we’ve gotten some shipments from a local wholesaler that usually supplies restaurants and is now doing curbside pickups around the Washington, DC, area.
We’ve ordered peanut butter from Target. (Try ordering peanut butter from Amazon. Currently unavailable.)
It’s equally difficult to get scheduled with a delivery service. And the ones that exist cannot come close to keeping up with demand. Try getting an Amazon Fresh or Instacart delivery. (Well, actually don’t. Amazon said Monday that they’re putting new customers on wait lists.)
Those are luxuries that may not be available to everyone. But with demand, it feels like they’re available to no one. And still, people are behaving in unbelievable ways. This story about people luring Instacart shoppers with big tips and then stiffing them is abhorrent.
And that brings us to the uncomfortable truth that coronavirus has revealed more starkly than ever — that hardships are felt disproportionately in this country. What I described above is food uncertainty, and it’s a new experience for many.
But what millions of Americans are experiencing more acutely than ever right now is food insecurity, thanks to the sudden increase in unemployment and the shutdown of vast sectors of the US economy. That includes millions of needy families with children who are still waiting to see food benefits that were approved by Congress weeks ago.
Which is why there’s so much talk about re-opening the US economy.

The experts will save Trump, if he’ll let them

Trump spent months — years! — publicly humiliating Jerome Powell, the former investment banker Trump appointed as chairman of the Federal Reserve in 2017. Presidents normally try to keep their hands off Fed decisions on interest rates, but Trump felt free to hammer away at Powell over a 2018 decision to raise interest rates, specifically to give the economy a cushion in case of disaster.
Now, though, CNN’s Phil Mattingly reports that Powell is the one taking extreme measures to help save as much of the US economy as he can, or at least to prevent a full-blown repeat of the 2008 financial crisis.
That brings us to Dr. Anthony Fauci, who has emerged as the latest voice of reason figure beloved, and worried over, by the public. That has predictably led to a growing and concerted effort by Trump and his allies to undermine him. This is both the most predictable thing in the world — a member of Trump’s administration cannot truth-tell for this long without running afoul of Trump’s loyalists — and more evidence of toxic swamp of revisionism that surrounds this White House.

New York Democratic Gov. Andrew Cuomo is having a moment as a steely leader while his state deals with the worst of the coronavirus outbreak. See the cover of Rolling Stone, for instance.
But there’s plenty of reason to argue his West Coast counterparts, who acted earlier and whose states are not suffering nearly as much as New York, should be getting more attention. Today, groups of governors on both coasts formed regional pacts to navigate reopening their economies.
The New York Times’ Jonathan Martin and Adam Nagourney wrote a very smart story about the East/West divide in terms of the national spotlight. It includes, for some reason, a kicker quote from Bill Walton.