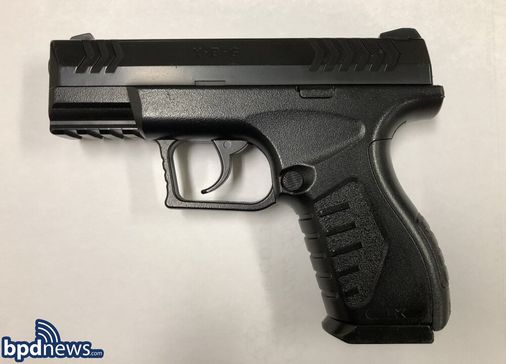 Two teens and a man who was carrying a BB gun were arrested for allegedly entering a Jamaica Plain bakery and stealing a tip jar Monday evening, Boston police said in a statement.

Officers were conducting surveillance near the Bromley Health housing development at 7 p.m. due to recent reports of thefts in the area that involved juvenile suspects, police said.

The three males were looking around the neighborhood and into each car they passed, eventually stopping in front of Santia’s Bakery at 3381 Washington St., police said.

The 17-year-old looked inside the bakery’s large window and entered the business through its front door, while Davis and the 15-year-old stood watch in the bakery’s parking lot, said Officer James Moccia, a spokesman for the Boston Police Department.

Officers said they allegedly saw the teenager in the bakery take a tip jar that had money in it from the counter and quickly leave. He jumped over a railing and then fled on foot with the other two suspects toward Washington Street, police said.

Officers stopped and arrested the suspects several blocks away from the bakery near English High School, police said. Officers discovered a black 4.5mm BB gun in Davis’s waistband and money in his coat pocket, police said.

Police said they also found a tip jar that was labeled with “Santia’s Bakery” on the ground near the suspects.

Moccia said police are still investigating if the suspects were involved in the earlier thefts reported in the area.

The suspects were each charged with larceny from a building. They are to be arraigned in West Roxbury Municipal Court.