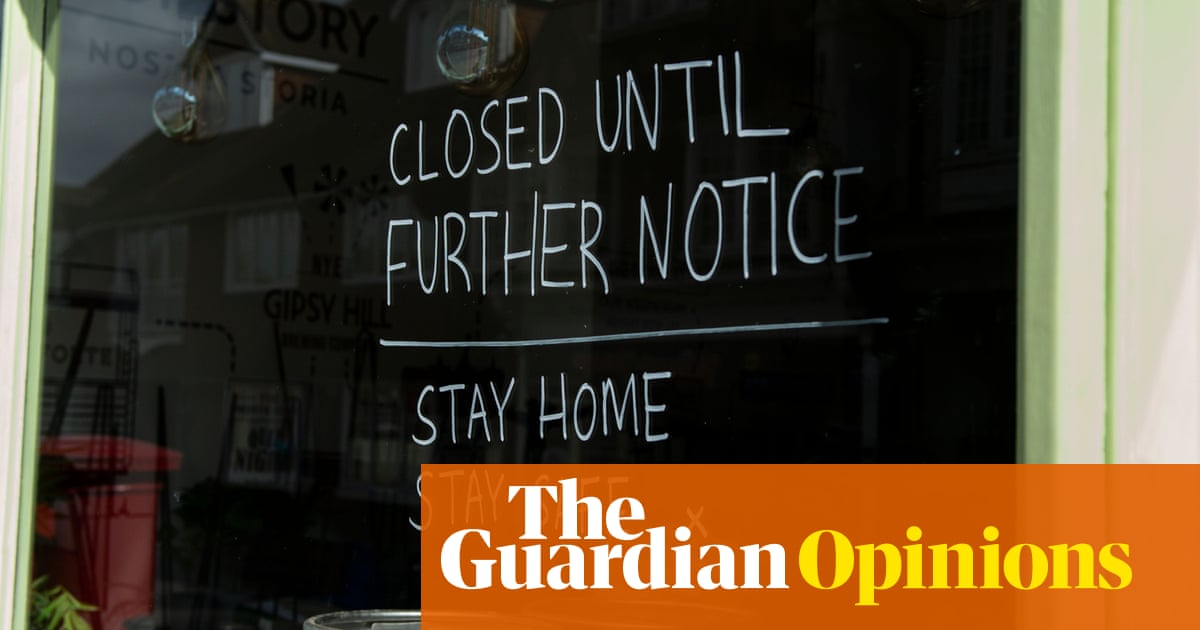 I’ve spent the best part of two years now writing obsessively about restaurants. I don’t just love them, I depend on them: they are where my social life takes place, where landmark events are celebrated, where I learn about the different cultures that make up my community. But the industry is on the precipice of oblivion: most restaurants in the UK are closed, and those that have switched to takeaway and delivery know it’s merely a sticking plaster. In London, the country’s food metropolis, the shutters are down from Soho to the Old Kent Road.

As this became clear, my first reaction was to go into cheerleader mode: pick up pom-poms and shout that this great industry needs to be bailed out at any cost. To go into reveries about my favourite meals: the moo krob at Singburi, the pig fat cannoli at Quality Wines, the breathtaking platter of blood sausage and fermented shrimp paste at Phở Thúy Tây. But something about this makes me uneasy, as if I’m nursing myself with nostalgia for a world that never quite existed.

The pandemic offers us an opportunity to shine a light on the less visible reaches of the restaurant ecosystem. There are the landlords, whose rents are so extortionate that many restaurants in city centres struggle to break even. The developers who use restaurants like magnets to attract the “right sort” of people in gentrifying areas, transforming swathes of our cities into pseudo-public spaces of boutique restaurants, pushing working-class Londoners further away from their homes. PR companies who ensure that only those establishments that can afford their services get media coverage. Private equity funds that turn restaurants into short-term investments, relentlessly cut costs (and ultimately quality), and fuel the notion that the only way to turn a profit is to rapidly expand. It’s no coincidence that those who are clamouring for bailouts the loudest are those who have reaped the most rewards from this multi-billion dollar industry that makes money for a relatively small number of people.

Covid-19 has also shown us that the industry is on even shakier ground than we suspected: the tight cashflow, high overheads, and a reliance on tourism were all pointing in a bleak direction before the lockdown. The number of restaurants going bust was on the up, and the high number of places opening was disguising the fact that most restaurateurs couldn’t see their business model as sustainable. It’s no secret that the industry turns a profit only because it is built on cheap labour, particularly migrants and people of colour, and, according to chef Thom Eagle, “an ethos that work ranks above personal and social needs”.

We, as greedy consumers, have to accept some responsibility. In the same way clapping for nurses illuminates uncomfortable questions about their perceived value before this crisis, uncritically fuelling the demand for more and more restaurants at cheaper prices has masked the value of this labour to our daily lives. Not every fish needs to be ike jime and couriered from Cornwall, or every chicken corn-fed from Fosse Meadows, but we should accept that fish and meat need to be priced higher across the board if those behind the scenes stand a chance of being paid a decent wage.

As for restaurants themselves, chef Asma Khan tells me the biggest issue is unionisation. “After this,” she says, “our priority should be to create a powerful union that is the voice of the workers, not the owners and investors.” Pressure groups such as Jonathan Downey’s Hospitality Union, made up of restaurant owners and industry figureheads, are doing vital work in pushing for rent holidays and debt moratoriums while trying not to scare nervous landlords by saying “rent strike”. But this is fighting a problem caused by rampant capitalism on its own terms. Now is the time to start having honest conversations about food prices and supply chains, high rents and civic space, about who restaurants – or at least the ones that get coverage – really benefit.

Our modern era has been partly defined by the rise and democratisation of the restaurant. Seventy years ago almost half of UK households never ate out and restaurants were the preserve of the rich. Today, if you live in London it’s possible to eat out or order in a taste from almost the entire world. A side effect of this is that we have become alienated from where food comes from and the work that goes into making it. But restaurants can now play a new role in redressing the balance.

Vaughn Tan, a professor at UCL whose upcoming book looks at how successful restaurants adapt, believes that this crisis will force the industry to “fundamentally rethink what it even means to be a restaurant”. Some have now pivoted to selling produce from their suppliers directly to consumers, a positive development that will put great produce in the hands of more people, and will help educate customers, and maybe some critics, about exactly why their turbot costs that much. Many will now have to work out new business models that supplement eating at home – a model that immigrant-run restaurants, from kosher delis in Golders Green to Cypriot takeaways in north London, are already familiar with. Over the next few months, the restaurants which are the most adaptable will find their own solutions to the crisis that focus on community and simplicity. The possibilities are both terrifying and exhilarating.

We are in uncharted waters: the industry has never seen this before, and all signs point to the likelihood that restaurants as we know them aren’t coming back for a while. To move forward, we must start by examining what we would like to save about the industry, giving space to the things that nourish us and our communities, and discarding what we believe doesn’t deserve to survive. After all, the real danger the restaurant industry faces isn’t annihilation – the danger is that it comes back the same as it was before.