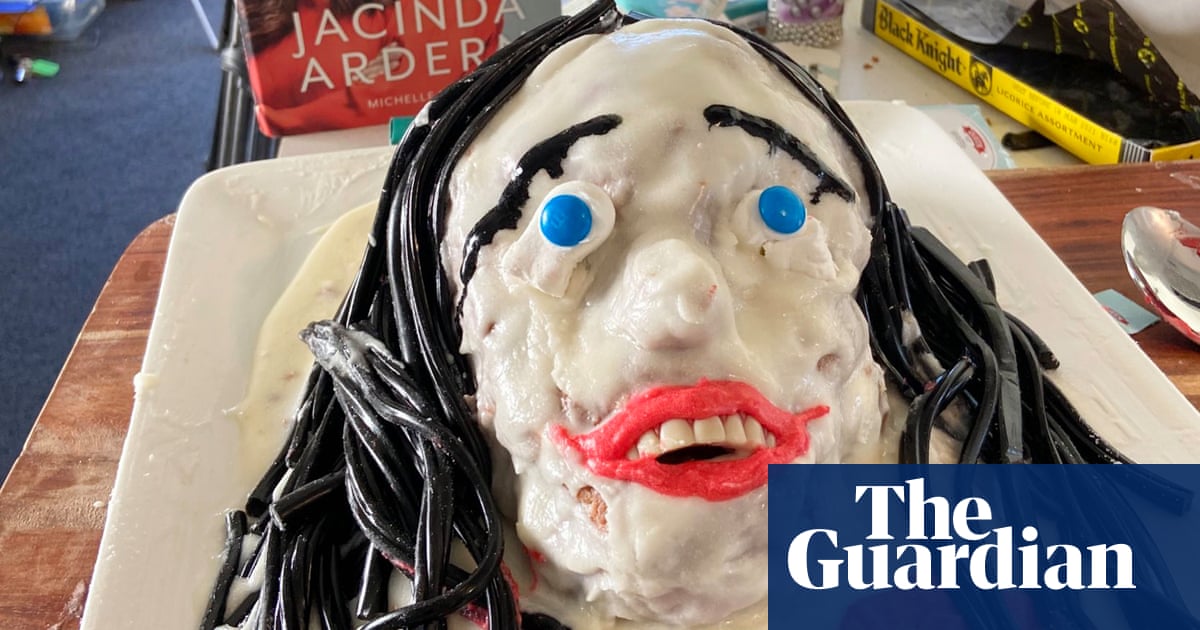 A tribute to the prime minister of New Zealand has gone horribly wrong, after a television presenter attempted to render Jacinda Ardern in cake form, and failed spectacularly.

Laura Daniel said the common wisdom was “don’t bake your heroes” but she wanted to try anyway as the coronavirus lockdown dragged on.

“I’m deeply sorry Jacinda Ardern,” Daniel wrote on Instagram of her masterpiece. “I truly tried my best with what I had available … it’s made from another NZ icon lolly cake.”

Supermarket shelves have been short of flour and baking supplies for weeks because many have taken up baking as a hobby during New Zealand’s four-week lockdown, which has imposed some of the most strict restrictions anywhere in the world.

The cake – which features a lurid shade of pink lipstick, wavy black liquorice hair and googly blue candy eyes – was based on a picture of the prime minister on the cover of a recent biography of Ardern, An Extraordinary Leader.

The coup de grace was a set of what appeared to be real teeth.

People were gently mocking of the cake online but also praised Daniel’s attempt at honouring the prime minister. “At least we now know what our PM would look like if she had a crack habit?” said one.

Ardern has been applauded for her leadership during the coronavirus crisis, with the numbers of infections dropping by the day, and the death toll at 9; all older people with underlying health conditions.

Dr Ashley Bloomfield, the director-general of health, has also drawn admiration for his calm, measured leadership, fronting up most days for a media conference which has become a 1pm staple for many Kiwi households.

Riffing on his popularity, Wellington artist Kirsten Sutherland has stitched Dr Bloomfield’s face onto a hand towel, with Wellington council promoting the work as “creative inspiration for that 20-second hand-washing routine”.

“Let the soothing image of our man of the moment, Ashley Bloomfield, guide you through safe hand washing and drying practice,” the artist’s website reads, adding that the towel is available in shades of white, beige and “bloom”.